The PGA National Resort and Spa in Palm Beach Gardens, Fla., is about as elaborate a country club as one can find. Located on 3,000 acres, the resort includes five championship golf courses, 19 tennis courts, a 33,000-square-foot health and racquet club and a 39,000-square-foot spa. The main resort features 339 guest rooms as well as 40 cottages. Condos and single-family homes on the property house 5,000 residents. 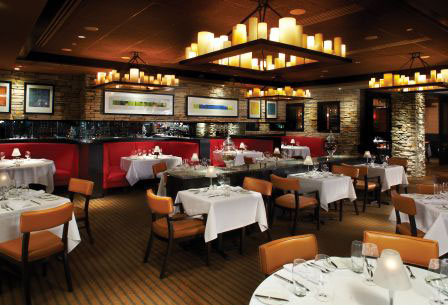 Ironwood Steak and SeafoodBuilt in the early 1980s by a Palm Beach developer, the country club was sold in 2006 to Walton Street Capital, a Chicago investment firm. "We are a country club resort, with 2,000 members, that is open to the public," says Gordon Maybury, executive chef.

The property features 10 foodservice operations, with banquet and room service available. This includes a casual restaurant, an upscale-casual steakhouse, golf course and pool foodservice and a number of snack bars.

"When we hosted the PGA Tour's Honda Classic, we handled 300 covers," Maybury says. "On an average weekend night, we serve between 160 and 180 people, and bring in about 120 each weeknight."

FE&S spoke to Maybury about the country club's recent renovations and the challenges involved in this segment.

FE&S: After 30-plus years, how has the club stayed current?

G.M.: We underwent a $60 million renovation in 2006 and 2007 and this summer spent about $40 million to revamp the restaurant kitchens and guest rooms. The Citrus Tree restaurant was renamed Palm Terrace. We also have created a new banquet space that includes a terrace on the pool deck, which is designated for weddings and other events. The club hosted 65 weddings last year. In addition, the renovation allowed us to increase our meeting space from 45,000 to 60,000 square feet.

FE&S: What changes did you make to the main dining room?

G.M.: This space was overhauled last year. Prior to the change, it was a Shula's Steakhouse. When the chain's contract was up, we transformed it into the Ironwood Grill. The décor remained the same, with stone walls, rich wood and wine cellar walls. Unfortunately, the American grill theme was difficult to define, and since the look stayed the same, our customers still thought of us as a steakhouse. As a result, we recently changed the name to Ironwood Steak and Seafood. In July, the 150-seat restaurant won a Wine Spectator 2012 Award of Excellence. We offer more than 350 top-shelf wines. Although the décor remained the same, we created a new tabletop and brought in new waitstaff uniforms that include chef jackets and aprons. We also redesigned the menu cover to correspond with the restaurant's stainless steel and wood accents.

FE&S: What changes were made to the back of house?

G.M.: We reworked the line and installed a new broiler. The pantry was moved over, so dishes all come off of one line. This makes production easier to control and creates an ideal layout for chefs to expedite the food. In addition, the new design provides a better view of all items before they leave the kitchen. We also purchased new cast iron skillets, which we use to serve our 32-ounce Tomahawk rib eye steaks tableside.

G.M.: The kitchen is large, with a 20-foot stainless steel prep table down the center. We use this when we bring customers into the kitchen during receptions, which include wine, cheese and hors d'oeuvres. A waiter station that includes coffee service, which is the hub of the restaurant, is on the other side. This setup allows us to move food out more quickly. In our restaurant, everyone becomes a food runner.

The cookline includes two fryers, a 36-inch broiler that includes an oven on the bottom and warmer on top, a 36-inch grill, a 36-inch flattop and a 10-burner stove over two ovens that are topped by two salamanders. The sauté station includes a bain-marie with five wells in front for hot sauces, creamed spinach and soup. The pantry holds an upright refrigerator and two pizza-style prep areas that include salad and dessert components. On the front of the line by the broilers are hot lamps to keep plates and food at proper temperature prior to serving.

G.M.: Ironwood is positioned as a modern twist on traditional steakhouses.

Because we are now independently run, we can change the menu monthly. We constantly add, take off and rework dishes, depending on the reception from our members. Dishes include steak chowder, crab soup and a lettuce wedge salad with locally grown baby iceberg lettuce and tomatoes, California goat cheese that eats like Brie but has blue veins, and smoky Wisconsin bacon, topped with homemade buttermilk dressing. We utilize local farms for much of our produce and regional fish purveyors for Florida seafood. We offer the same appetizers as before, including a raw bar section, which is balanced with our steak and seafood dishes.

FE&S: Do separate kitchens service each foodservice area at the country club?

G.M.: Yes, each outlet has its own kitchen, including the spa café and the 19th Hole, which is the golf course restaurant that offers burgers, sandwiches and salad. There is a main banquet kitchen that produces all of the club's cold food items, dressings and sauces. We also have a central bakeshop on site that provides desserts for the entire resort and banquets.

FE&S: What do you look for in foodservice equipment?

G.M.: Equipment has to be durable. This club is a high-volume operation and units have to hold up. Also, multifunctionality is important. We're not just a restaurant, but serve as a banquet hall, à la carte eatery and fine dining establishment. We typically have many things going on at once, such as a buffet for members, banquets, happy hour, etc. The equipment also has to provide the right application for the space and area for which it is designated. Reliable refrigeration is key, as well.

FE&S: What are the biggest challenges with country club foodservice?

G.M.: Because we have the same members dining often, we have to constantly change up our menus and concepts to keep them coming back. We have Sunday brunch and prime rib and pasta on Thursday nights. Also, Friday night we offer a three-course prix fixe menu with wine for $30. A la carte service is provided on Saturday nights. But we also create theme nights, such as clambakes, buffets, Lobsterfest and Jazz Night to draw in more guests. Fortunately, our operations are built for speed. We can feed up to 150 people in one and a half hours.

FE&S: What are the cost issues involved with country club foodservice operations?

G.M.: Our costs are typically higher than a traditional restaurant. Membership dues at the club vary, but can be as high as $30,000 a year, and justifiably our customers feel they are entitled to the best. Country club restaurant prices are a bit lower than a conventional restaurant, with members paying 20 percent less than nonmembers. For example, a salmon entrée would typically cost between $22 and $25, whereas club members pay $18 to $20.

FE&S: What are the club's plans for the upcoming year?

G.M.: We are still updating. The 19th Hole is getting a new look and will soon reopen as Bar 91. We have 90 holes total, so that's where the name originates from.

Teeing Off on Country Club Foodservice