After 30 years as a casual dining operation, Woody's Bar-B-Q is repositioning itself as a fast-casual and express concept. 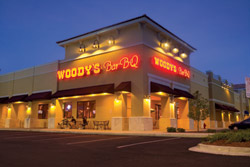 "We have enjoyed great success over the past three decades as a casual dining concept," explains company co-founder Woody Mills. "But with the increased interest in franchising paired with the high demand for takeout and catering from our existing stores, we felt it might be time to add a couple of special ingredients to our franchise offerings through new fast-casual and fast-casual express Woody's Bar-B-Q locations."

The Florida-based chain made the decision to go to smaller units for a variety of reasons. "The smaller restaurants lend themselves to lower build-out and start-up costs, fewer employees and tighter operations," said Troy Taylor, director of franchise development. "We improved things with the smaller model and lowered the monthly operating costs. The model also opened the door to more locations and franchisees. If you take that person and put them into a model that's much easier to operate, keep clean and execute and you help them get a quality location, you have just significantly enhanced that process."

Of course for a restaurant chain that's been in business for more than 30 years, making a change like this does not happen overnight. "Woody and Yolanda, the founders, started thinking about this about five years ago. A lot of it came from observing our existing stores and seeing what worked and what needed to be fixed," said Taylor. "And a few years ago we started with going to smaller locations."

Woody's then began fine-tuning their new prototypes by focusing in on real estate selection, training and more. "Then we tightened everything up internally and it eventually evolved to this point," Troy said.

Naturally, evolutions of this nature come with their tradeoffs. For example, the smaller locations mean Woody's will see its seating drop to 80 to 100 seats per location from 140 to 145 seats, as was the average for the previous prototype. Still, the chain seems poised to weather this due to the fact that 30 percent of each location's business is done via takeout.

"We already have what everyone wants: take out and hopefully that improves too," Taylor said. "Our goal is to improve the design and layout and design of each store as we roll them out."

Because Woody's previously was a traditional casual dining operation based on table service the transition to the new format required a few adjustments. For example, the new format's service model has the customer come to the counter and order their meal from a slightly smaller menu. After paying, the counter staff hands them a cup and the customer heads to the drink machine before a runner eventually brings them their order.

For customers dining in the restaurants, their food will continue to be served to them on melamine dishware and they will use stainless steel flatware to consume their meals. "We did not want to get the feel that this is just a place for lunch. We want to create a presence where people feel like they can come for lunch or dinner," Taylor said.

As a result, the chain has kept its warewasher in the back of the house but did manage to reduce the amount of hood space needed by six to eight feet per location. That translates into a savings of $1,000 per square foot, according to Taylor. All in all, startup costs for the new Woody's units begin at $227,000 and can go higher depending on a variety of factors.

The change comes at a time when the barbeque chain is on solid footing, according to Woody Mills. "We are holding our own and our same store sales are up a little bit. We are pleased with that in this economy," he said. "And it seems like things are starting to turn around."

Last year, Woody's sold 10 franchises, which expanded its franchisee network to 30 in the United States and five in Canada.