Brad Wasserstrom has worked for The Wasserstrom Company, a Columbus, Ohio-based foodservice equipment and supplies dealership, since 1993. He began his career at the company’s Phoenix operation working in their stainless steel fabricating facility. After a break from the company, Brad moved back to Ohio in 2001 and was involved with all facets of operations at Wasserstrom’s national equipment sales headquarters. Brad is currently president of The Wasserstrom Company. He is an active member of the Foodservice Equipment Distributors Association, serving on the executive committee as vice president. Brad also serves on advisory boards for COSI and the Bexley Community Foundation. 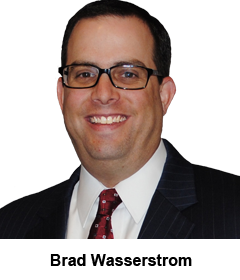 Brad Wasserstrom: The people I get to interact with. It is a dynamic industry with the pace of change increasing but the constant is, and always will be, the people. I have been lucky to have met and worked with so many terrific people that I just want to keep going. It doesn’t hurt that I also love to eat.

FE&S: Who was the person that influenced your career most?

Brad Wasserstrom: There are so many people who have influenced my career that if I answer this, I’ll probably miss someone. So I pass.

FE&S: Who in the foodservice industry do you admire most?

Brad Wasserstrom: My father, Rodney. Everyone who has met him and worked with him has come away with great things to say. His ability to connect with people as quickly as he does and remember them all is remarkable. So many people have told me how much respect they have for him that I have lost count. He is a great role model and mentor to me.

FE&S: What aspect of your career gives you the greatest sense of accomplishment?

Brad Wasserstrom: Helping customers find solutions gives me the greatest sense of accomplishment. It doesn’t have to be the solution to a large issue either; sometimes a small answer for a person just looking for basic help can be just as rewarding.

FE&S: If you were not working in foodservice, what would you be doing?

Brad Wasserstrom: I have no clue, at one point I wanted to get into college athletics administration, but I don’t think I would have enjoyed the politics that come with that field. At this point, I can’t imagine doing anything else.

FE&S: What type of charitable activities are you involved in?

Brad Wasserstrom: Currently I serve on the community advisory board for the Center of Science and Industry here in Columbus, a terrific science museum that I frequented as a child. I am also on the board of directors for the Bexley Community Foundation, a group supporting the community of Bexley, Ohio.

Brad Wasserstrom: I like to read, cook, listen to diverse music and follow sports, especially college football — I do live in Columbus, Ohio, after all. However with my job, family — we have two young daughters — and other involvements I don’t have a lot of time for anything specific right now.

FE&S: What do you look for in a business partner?

Brad Wasserstrom: The people I am most successful working with, whether internal to our company or external, are those whose values closely align with ours. The core values of our company are ingrained in everything I do, so finding others that share a similar set of values (family, honesty/integrity, hard work and service) helps ensure success.

FE&S: What’s the best advice anyone ever gave you?

Brad Wasserstrom: Learn something new each and every day; you can never know enough. A day that goes by where you learn nothing is a wasted day.