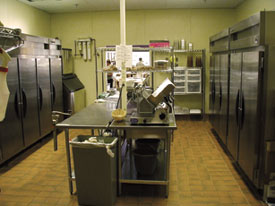 "To best sustain the operation and get to the revenue volumes they wanted, the team knew they needed to add food to the menu," says Mike Rotondo, Tropical Smoothie's COO.

As a result of Tropical Smoothie's ability to evolve, the 300-store chain is holding its own against competitors like Panera Bread and Atlanta Bread Co. in the markets where they come head to head, according to Rotondo.

Yet, the journey from smoothie bar to restaurant has not been without its obstacles. "Our biggest challenge is getting average consumers to believe and acknowledge the fact that a smoothie concept has great food," Rotondo says. "They mistakenly assume that our food items are a prepackaged snack option made in a commissary. They don't expect it to be as good as it is." As the chain expands, however, word gets out about this smoothie bar's formidable menu.

Tropical Smoothie experienced double-digit growth in its sales last year, and average unit volume has been on the rise. "Smoothie sales are increasing, but much of the growth is coming from the food," Rotondo says. "There are not many smoothie operators competing with the likes of Panera. It's great to be there, but it's also tough to be there."

To help differentiate the operation, there has been an increased focus on the morning daypart through the sales of breakfast sandwiches and wraps. Of course, smoothies also remain a key component of the morning offerings.

The wide assortment of smoothies includes a power version with supplements and whey; low-fat varieties; and breakfast smoothies that include flax, oats, vitamins and more than eight grams of whole grains. Top sellers are the Acai Berry, Sunrise/Sunset and Kiwi Quencher. "We've had a significant increase in breakfast volume, mainly with our smoothies, but lunch remains our biggest day-part," Rotondo says.

Tropical Smoothie makes both its hot and cold sandwiches to order. The chain's best-selling food items include the King Caesar and Buffalo Chicken wraps and the Chicken Pesto flatbread. "When LTO items, like our chipotle chicken flatbread, became mainstays on the menu, we knew we were doing things right," Rotondo says. The chain regularly makes room for these well-received items on the permanent menu.

Rotondo describes Tropical Smoothie's back-of-house operations as lean and mean. Still, kitchens range in size from 100 sq. ft. in its urban locations to 1,500 sq. ft. for sites that provide catering.

Tropical Smoothie's flexible layout and footprint make expansion easier by allowing the chain to repurpose former quick-service restaurant locations. The fact that the operation's kitchens do not require hoods, grease traps or fryers allows for even greater flexibility during site selection. "We've even gone into college campuses where there is only 275 square feet," Rotondo says. "Even in nontraditional, smaller footprints, we can be successful."

The chain currently has initiatives to become more vertical and is looking for ways to take its food line from 13 feet down to 10. "We want to maximize the smaller footprints that are available to make them more efficient from both an operation and cost standpoint," Rotondo says.

Tropical Smoothie accomplishes this by using the same equipment models in different sizes and cubing them together. While some of its kitchens feature a straight-line setup, other stores have shorter, back-to-back production lines, which cut the footprint in half.

The chain further increased its efficiency recently by switching from conveyor ovens to rapid-cooking units for toasting sandwiches and wraps. "The goal was to improve on our consistency," Rotondo says. "With the conveyor ovens, it was too easy to speed them up or yank product out prematurely. The new ovens also opened up opportunities for us to create other products that wouldn't work in the conveyor oven."

Because smoothies account for 50 percent of Tropical Smoothie's business, ice machines play a critical part in ensuring beverage consistency and thickness. "We have played around with a couple different ice machines, until we found the type of ice that works best," Rotondo says.

About a year ago, the chain upped its blender horsepower from two hp to three hp. This change has resulted in increased speed of service as well as a longer blender service life. "The two-hp blenders were good, but these were not lasting as long as we needed in our higher-volume stores," Rotondo says. "The three-hp units are workhorses."

Walk-ins store smoothie ingredients, including such fresh fruit items as oranges and bananas, as well as individual quick-frozen (IQF) produce, including strawberries and mangoes.

Seating capacity at Tropical Smoothie locations ranges from 10 to 80 seats, although 30 to 45 seats are the average. Tropical Smoothie has ramped up its drive-thru service, and now more than half of its stores offer this. Average service time is three minutes or less. "Some of our highest-volume stores have drive-thrus," Rotondo says.

To better compete with quick-service operations, the chain incorporated value menu items at the end of 2009. This includes $3.99 flatbread sandwiches.

"We wanted to do it in a way that enhanced our menu but did not cannibalize other items," Rotondo says. "As a result, we've increased our profits without decreasing our average guest check amount."

The chain continues to travel a steady growth path, with plans to add approximately 25 locations by the end of 2011. Tropical Smoothie plans to add more than 40 new sites next year. In the meantime, traffic has continued to pick up at its current locations, and interest from potential franchisees is growing.