Grillin’ Season: One Restaurant Chef Designs His Own Robata Grill

A new trend in grilling has emerged as a slew of restaurants in Las Vegas, New York, Chicago and other major metropolitan markets experiment with an ancient Japanese technique. Known as robata, this approach uses special charcoal and stones and is known for its powerful heat and low smoke point. 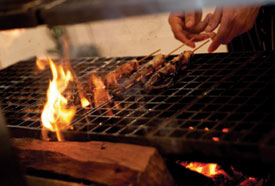 "There is something special about cooking over live fire that no gas or electric piece of equipment can replicate," says Dan Tucker, executive chef of SushiSamba Rio in Chicago. "The robata gives me that ability to produce a beautifully charred piece of beef, crunchy on the outside and juicy in the center, as well as the most delicately roasted piece of chicken — moist, succulent, and kissed with just a hint of smoke."

Tucker got the idea to design and develop his own robata grill at the Chicago location after opening the first SushiSamba in Las Vegas. "We converted an old gas grill to create the robata," he said. "First, we removed all the gas heating elements, and then welded in a 20? x 30? stainless steel box. We line the box with bricks and paving stones and top it with cast iron grates. The box was the only challenge to source, but we were able to find a metal fabrication shop to build it for us." Tucker points out that there are a few commercially produced robata grills on the market as well.

Most robata grills, including Tucker's, use the rare binch?-tan charcoal, a traditional white charcoal found in Japan. Because of the intensity at which binch?-tan burns and the low amount of ash that it produces, this charcoal does not require a bottom-vented grill. This allows Tucker to cook directly on a flat stone surface. In contrast, other charcoals or woods would smother themselves in ash and not receive sufficient airflow, he says.

Binch?-tan charcoal also produces very little smoke while burning so standard ventilation is sufficient for the grill. Tucker used a separate hood and flu for the grill, per Chicago fire code.

This type of grill presents several significant advantages, according to Tucker. "The flavor that the binch?-tan gives to the food is much more subtle and campfire-esque than pronounced and smoky," he says. "The robata makes it easier to cook more delicate foods such as seafood, hamachi and organic vegetables." That's because the robata's charcoal burns hotter than traditional grills, searing foods quickly to create a caramelized, slightly crunchy crust and helps release the natural flavors of foods without overcooking them.

"We often utilize a secondary cooking surface 10 to 12 inches above the grate," Tucker says. "Items are capped with bowls and allowed to gently bake/smoke above the fire after being seared."

The grills also allow Tucker to cook more foods in one cycle as a result of the flat surface and intensity of the charcoal, which won't lose its heat and rebounds effectively. In that sense, it offers a high-efficiency component — and a tasty one at that.