Wing Stop is flying high with a concept that does 75 percent to 80 percent of its sales in takeout and 92 percent from three items — wings, fries and beverages — out of kitchens that measure 600 sq. ft. 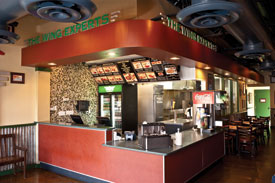 That model, says CEO Jim Flynn, hasn't left a lot of room — or need — for change. But select strategic moves during the past few years have helped keep the company on a growth track. First, Wing Stop expanded its hours from dinner only to lunch, which now makes up 20 percent to 30 percent of sales. Second, it added boneless wings, which now comprise 20 percent of wing sales.

Wing Stop is now shaking things up with Gliders, its first-ever sandwich product. Presented as a 90-day limited time offer, Gliders are 3-oz. portions of boneless chicken breast meat coated in seasoned breading, fried and served on a fresh-baked yeast roll with pickles. They can be served plain or tossed in any of Wingstop's sauces and can be ordered a la carte in two, four or six sandwiches per order, as well as in a two-piece Glider Combo with fries and drink.

"In tests we found that a sandwich was more friendly than wings to a lot of customers who otherwise might represent a veto vote," Flynn says. "And it's better for lunch for many people than wings. If it goes well, we'll likely add it to the menu." Prepared in the same fryers as wings, no new equipment was needed to launch the Gliders, he adds.

And there's more in store. The chain plans to add wraps, twister-style fries and salads, as well as a new concept prototype. "We're in the process of testing two or three new Wingstop Sports restaurants," Flynn says. "They're about 2,400 sq. ft. compared to our typical 1,500-sq.-ft. Wingstop unit. It's a way to extend the brand that we think makes a lot of sense."