A good idea should not go to waste; instead it should be franchised. This was the impetus behind the growth of Tempe, Ariz.-based Tilted Kilt, which has grown from one location to 53 in the six years since Ron Lynch joined the company as operating franchise president. 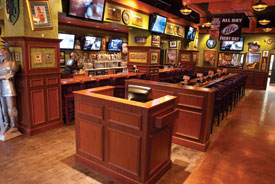 A former area developer for Schlotzky's Deli, Lynch visited Mark DiMartino's single Tilted Kilt location at Las Vegas' Rio Casino in 2005 and knew he wanted to own the concept. The men decided to form a partnership, with the goal to franchise and expand the brand. Tilted Kilt now has locations in 18 states, with a heavy concentration in Illinois, Georgia, Florida and Texas, and anticipates a total of 75 sites by year end.

The concept has been compared to a Celtic Hooters', with female servers dressed in short kilts and revealing crop tops. Customer service is the hallmark of these sports pubs. "I've been in the QSR segment, and so many operators take the human touch out of it," Lynch says. "We're going the opposite direction."

Both Lynch and DiMartino are food guys, so it was important for Tilted Kilt to blend its entertainment value with good food. Although its biggest seller is the 10-oz. cheeseburger, the chain has concentrated on healthier fare, including grilled chicken wings, salmon and turkey burgers.

"Healthier items are unusual for a sports pub, but we're finding that even young males are more health conscious," Lynch says.

There's still no mistaking that sports take center stage. With between 30 and 45 big-screen televisions in each location, customers can watch three or four different sporting events at one time.

With 12 Tilted Kilt locations under construction at press time and another dozen in the permit stage, this chain is destined to take customer service to a whole new level.