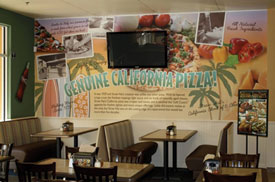 "We went from an average of 2,000 to 3,000 square feet in the old units to 4,000 to 5,000 square feet in the new prototype. And we completely re-did our décor," says president Jonathan Fornaci. "It's much more upscale, with earth tones and leather. At the same time, we kept to our core values, which are very family- and community-focused." All Straw Hats include a roughly 200-sq.-ft. arcade room for kids, and all new units have TVs throughout, both on the walls and at the booths."

On the menu, Straw Hat's signature pizzas are now joined by a "grill" menu, including burgers and other grilled sandwiches, steaks, seafood and made-to-order pasta dishes. The change has broadened the chain's appeal, boosting traffic and repeat visits. Tower 27, so far implemented in seven stores and being rolled out in all new units going forward, adds a fun, self-serve dessert option and builds sales between traditional meal periods. "Pizza is still 60 percent of our total revenue, and always will be our core and our signature, but the changes we're making are about offering diversity and different options for both adults and families."