Saladworks has tossed together a fresh concept that during the past two years has kicked off national expansion, unveiled a new look, expanded its array of toppings, switched out its beverage program, and tackled new product development that fits its "tossed to order" service model. 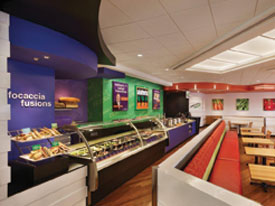 Beyond its crisp new design, which the chain calls Saladworks 3G, the changes made are more tweaking than groundbreaking, says president Paul Steck, but they're delivering positive results. Fountain beverage units were removed, for instance, and replaced with bottled beverage display cases that have driven sales and increased check averages. The salad case was reconfigured, too. "In new stores we have a customized case that holds up to 52 toppings. In existing stores, we remodeled the interior of the case to replace round crocks with square melamine ones," Steck says. "It allowed us to increase our toppings by 15 percent to 20 percent and add some upscale options such as tofu, edamame, haricots verts, and some new chicken and turkey items."

Saladworks also found a better way to prepare its Fusion Sandwiches. It switched to conveyor ovens and now runs meat and cheese components through on separate halves of the bread, open-face, before topping them with cold items from the salad case. The change reduced sandwich prep time from 2.5 minutes to 45 seconds, more in line with its tossed-to-order salad throughput.

Those ovens are also being used to test a new pizza product. Like the salads and sandwiches, they're made to order with topping selections from the salad case. Made-to-order soup is in test, as well.