Despite a tough year in terms of both real estate and franchisee financing, Moe's ended 2010 with revenues up 8 percent, 30 new units opened and comp-store sales ahead by 5.4 percent. Significantly bigger gains in both sales and units are expected this year, says president Paul Damico, thanks to a combination of menu innovation, ongoing promotions and a major new positioning campaign. 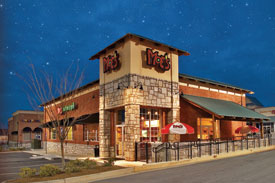 Moe's added one of its most successful limited time offers ever — rice bowls — to its permanent menu last year and brought back its popular buffalo chicken quesadilla/taco/salad LTO, both of which helped drive comp-store sales, which Damico estimates will jump again by 6 percent this year.

But the big news is its positioning campaign, which touts Moe's mission to serve the highest quality, natural ingredients. Redesigned menu boards feature a new food mission wheel that "steers" guests to healthy choices. Those include more than 20 gluten-free ingredients; vegetarian choices, including cheese and sour cream that are free of gelatin and animal rennet, as well as grilled items prepared on separate equipment from meats; and low-calorie options, including meals that weigh in at less than 450 calories.

The wheel also appears on Moe's website and social media sites and as wall art in the restaurants. Highlights from it are reiterated at different touch points throughout the dining experience — even on the napkins. "Healthy has long been a Moe's cornerstone, but we never were prepared to talk about it globally because not all of our ingredients were at the standard we now have 100 percent of the time in 100 percent of the restaurants," Damico says. "They are now, so we're shouting it from the rooftops."