Upgrades are the name of the game in 2011 for Ridgeland, Miss.-based McAlister's Deli. The 304-unit chain is revamping its equipment package to maximize efficiency and speed of service and ingredients to focus on providing a more upscale product. 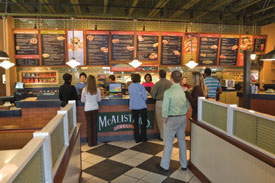 With the bulk of its locations on college campuses, the 22-year-old chain has had to reassess its business model to better meet the expectations of its demographic. "We're in the process of installing new kitchen prototypes, which are currently in 55 of our locations," says Annica Kreider, vice president of marketing. "Although we just started the conversion, everyone is pleased with it. Not only is the new prototype delivering on product consistency, but we are able to take two minutes off the ticket time."

In addition to incorporating rapid cooking technology, McAlister's Deli is installing hot holding units that help maximize preparation time for its baked potatoes. The chain's menu innovations include a relaunch of its grilled sandwich platform that will include new flavors. "We launched our Panini line in 2009 with five products, and now will transition into six," Kreider says.

"Some menu items will be new and others will be reformulated with our new breads, proteins or toppings, such as caramelized onions."

The chain will continue capitalizing on its "5 for Under 500" offerings of five meals with less than 500 calories each.

To further capitalize on the success of its LTO program, the chain recently created its On the Line Challenge. "This contest encourages those who work in our kitchens to create new LTO menu items from existing SKUs," Kreider says.

Approximately 70 entrees were received from 22 states.