Golden Spoon Frozen Yogurt has been on the cutting edge of its segment since the brand got off the ground in 1983. "You haven't seen anything yet," says Roger Clawson, Golden Spoon's franchising CEO. "In the next six months, we will revolutionize the frozen yogurt category." 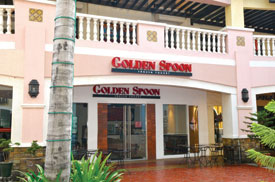 Some would say the chain has already accomplished this feat. Back in the 1980s, Golden Spoon challenged creameries to add chocolate and candy to yogurt bases. Deemed the "ice cream lover's frozen yogurt," the operation's goal was to be known as the Haagen-Dazs of the category.

"Flavors are oriented to evoke an emotional connection with our customers," Clawson says. "Our fudge flavor will taste just like the Fudgesicle someone had as a kid."

Golden Spoon's innovative flavor profiles are not rolled out at the expense of the frozen yogurt's healthy profile. Most varieties are non-fat, gluten free and low in sugar. "We are the company that, 30 years ago, took a product people primarily ate for its healthier aspects and changed the formulation and flavor profile [to make it more decadent]," Clawson says. "It's why we have thrived for so long."

However, unlike category mainstay TCBY, which concentrated on expansion over the years, Golden Spoon focused on product innovation and the evolution of new flavors. This resulted in a high customer loyalty rate that has helped sustain the chain through difficult economic times.

With stores heavily concentrated in the southwestern states, in addition to overseas sites in Japan, the Philippines, Canada and soon in the Middle East, Golden Spoon remains true to its roots as a staple indulgence for those living in California's Orange County.

Its reach and exposure are about to expand. "We've been the quiet company in the industry for the last 30 years," Clawson says. "We have not had publicity behind our brand in the past, so we will expand on our marketing and increase spends and exposure in the next 12 to 18 months."

Although Clawson couldn't reveal the company's plan in detail prior to the roll out, he says Golden Spoon is looking at one to two product extensions that will increase the chain's reach and scope to customers.

"This will affect how and when our customers eat our products," he says.