It's not just the West Coast restaurant chains that are on the cutting edge of the green movement. For Anna's Taqueria, which has six locations in the Boston area, environmentally friendly business practices have been standard since the chain was founded by owner Mike Kamio in 1995. 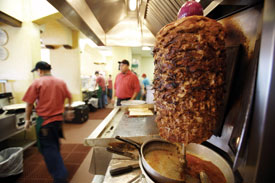 Its green initiatives have been implemented, not at the expense of the operation, but for its benefit. "It has to work for Anna's, our customers and the environment to be a win-win situation," Kamio says.

Its focus on green starts with the menu, which includes freshly prepared food with ingredients purchased from local purveyors.

From a green perspective, the chain gives special attention to its disposables. For example, Anna's serves cold specialty drinks in biodegradable cups made from corn flour. And the chain's extensive recycling program includes cans, plastic and glass. Managing the recycling program can be a labor intensive process. Staff collect and clean soda bottles before taking them to a local recycling center. Anna's also has separate collection bins for cardboard recycling.

"We bring about 2,000 pounds of recyclables to the recycling center twice a week," Kamio says.

When Kamio saw a restaurant utilizing the heat produced from a refrigeration unit to help warm up the eatery in the winter, he implemented a similar setup using an ice machine at one of Anna's locations.

"We utilize an ice machine that blows hot air inside the restaurant to keep it warm during the winter," he says. "A hood over this unit vents the hot air outside over the summer, saving energy and air conditioning costs."

The chain also utilizes a diesel truck that runs on used vegetable oil. "We converted a standard diesel truck in 2005, which we use to go to the local vegetable market, club store and recycling center," Kamio says.

Diesel fuel is required only to start the truck and after that vegetable oil runs the engine. This has decreased the need for diesel fill ups to only three times annually.

Kamio continues to look for other ways to decrease his carbon footprint and implement green initiatives. He is currently working with a paper supplier to replace bleached napkins with brown and will soon convert lighting to more energy-efficient systems.

"We always have environmentally friendly initiatives in the works," he says.