Mobile food trucks represent one emerging trend that has the foodservice industry buzzing. You can count the University of California Santa Barbara among the members of the non-commercial segment that is willing to take a food truck for a spin. Late last year the university took delivery of a new food truck to help with the foodservice concessions at its soccer stadium. 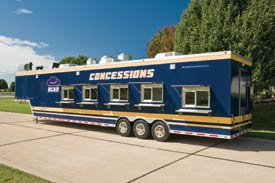 At UCSB soccer is the main sport on campus, with each game drawing 6,000 to 8,000 fans on average. And when the university won the right to host the NCAA soccer championships, the need to upgrade its stadium concessions became apparent. "We had a concessions trailer at the stadium already. It was old school, mom and pop-style," recalls Jill Horst, director of residential dining for UCSB. "It was kind of like what you would see at a carnival. So we wanted something that was cutting edge."

When developing the scope for the new concessions trailer, Horst and the UCSB team wanted a unit that could operate on its own and by hooking up to shore utilities. "We were looking for something that had multiple functions and purposes," said Horst. "We can move this around if needed." For example, two major forest fires rocked the area surrounding the university during the past four years. When an emergency like this occurs in the future, UCSB will be able to deploy its food truck to aid in the emergency feeding of those individuals battling the blaze or even the people displaced by it. "So we were looking for something that we could use in a lot of different venues," Horst said.

After some careful consideration, the mobile food truck was equipped with the following items: fryers, four-burner cook top, dual stack convection oven, hot holding equipment that can hold in volume, post-mix soda systems, three-compartment sink for warewashing, one hand sink, refrigerated chef's table, reach-in freezer, hood and fire suppression system. Also included was an ice machine, which is somewhat unique for a foodservice operation of this kind because they don't like to be bounced around too much and that can happen when transporting the truck from one venue to the next, Horst said. 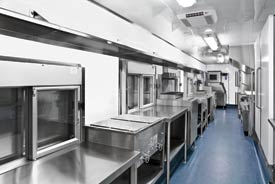 "With concessions, you really want a quick exchange. So you want something that you could cook in that would facilitate that exchange with the customer," Horst said. "It was just like I was looking for equipment in one of my residential dining facilities."

The unit measures only 8 feet, 6 inches wide but has five points of service, so communication among the ten staff members working inside is critical, specifically during busy periods. "It was a change in process for us because we were not cooking in a trailer previously," Horst said. "The concession staff was used to cooking offsite and trucking it to the stand. Everyone is really excited about working in the trailer because you can do everything you need to inside there."

In planning for its new truck, UCSB designed a special place for it in the soccer stadium. The truck goes down a small ramp that allows it to be level with customers when they approach to purchase food and beverages.

Right away Horst and the concessions team realized a few benefits from working with the new truck. For example, the operation became more efficient because staff was able to cook based on demand instead of trying to anticipate what customers might want. It also allowed them to expand the concessions menu to include French fries, spring rolls and various other hand-held, convenience type items customers will enjoy. And Horst and her team are not finished with the menu just yet. "We want to have regular concessions food and introduce more healthful items, too," she said.