FE&S reports on the hottest trends in tabletop design, concept development and other areas of the foodservice industry­—both at the back and front of the house.

Many restaurants are looking not only to source locally grown foods, but to grow their own foods. As a result, gardening has gone urban at a number of restaurants, culinary schools and colleges around the country. 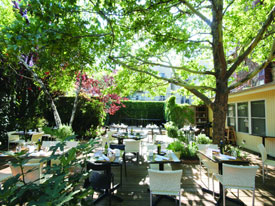 The Urban Garden at Chicago’s Piccolo Sogno includes a year-round vertical garden in the form of herbs and vegetables situated along the interior walls of the restaurant’s enclosed, open-air patio. During the cold winter months, the patio gets tented and heated.

Students at Chicago's Kendall College tend an on-site garden fertilized by the school's composted food waste. Grace in Los Angeles, Bastille in Seattle, Roberta's in Brooklyn, and Carnivale and Uncommon Ground in Chicago have rooftop gardens where they grow their own fruits, vegetables and herbs.

Also in Chicago, Rick Bayless plucks veggies from his home garden to use in his restaurants Topolobampo, Frontera Grill and Xoco.

At Piccolo Sogno in Chicago, the agricultural efforts take place indoors thanks to a year-round vertical garden. Herbs and vegetables grow along the interior walls of the restaurant's enclosed, open-air patio. During the cold winter months, the patio gets tented and heated to offer more comfortable dining options and, now, to protect the gardens. Executive Chef Tony Priolo is known for using a variety of local, seasonal produce in his authentic Italian dishes. 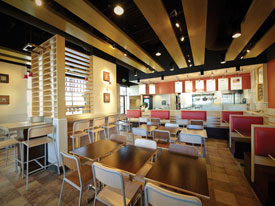 New Qdoba Mexican Grill units feature an updated prototype that creates a cleaner, more upscale appearance with improved signage that enhances the chain's overall brand. The goal of the remodel was to create a distinctive, iconic environment that differentiates Qdoba from competitors and supports the culinary commitment of the brand, according to a statement released by WD Partners, the Columbus, Ohio-based consulting firm that partnered with Qdoba on this project.

The new design elements include a spice rack affixed to a wall, a watercolor painting of vegetables, and fresh preparation of guacamole and salsa.

The new stores also feature photographs of Mexican scenes and other artwork meant to create an "artisan" feel. Other changes include communal tables and more contemporary two-tops, bar seating and banquettes made of dark wood, all intended to break up the dining room and offer more privacy in areas. Terra-cotta, neutral colors and pendant lights accent the space.

In addition, Qdoba enhanced the heating elements used along the serving line to keep foods at optimal temperatures. 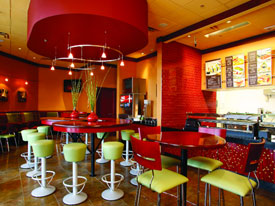 Sarku Japan, a 23-year-old Japanese quick-service restaurant chain located primarily within mall food courts throughout the United States, has introduced a store-front concept to franchisees throughout the country. The chain plans to expand its new Teriyaki and Sushi Express concept to 1,000 locations within the next 10 years.