Which Wich Progress: How Things Have Changed Since the Paciugo Gelato Caffe Acquisition

When Sinelli Concepts International acquired Paciugo Gelato Caffe in January 2018, it wasn’t buying just another brand for a portfolio that includes fast-causal sandwich chain Which Wich. It was choosing a partner for Which Wich, one that could expand its hours of operation and grow both businesses. 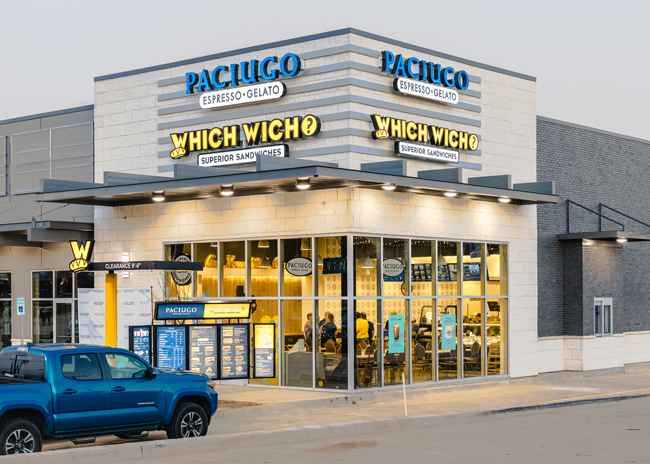 The company drafted a co-branding plan for the two chains, and now that game plan is playing out just fine.

“The co-brand has allowed us to cover more dayparts,” says Jeff Vickers, senior vice president of franchise development for Which Wich. “Which Wich owns lunchtime, but Paciugo is huge in the morning, and in the evening Paciugo captures the dessert segment.”

Paciugo, the 20-year-old Dallas-based gelato concept, not only offers some 400 flavor combinations of its frozen concoction, it also has a strong coffee and pastry element, smoothies and gelato shakes. The 32-unit chain has both brick-and-mortar stores and storefronts in nontraditional locations such as colleges and universities.

Which Wich, also based in Dallas, is a 400-unit fast casual chain known for its overstuffed sandwiches. Its signature Wicked sandwich includes five kinds of meat and three kinds of cheeses.

Co-branding has thus far taken the form of adding a drive-thru component to new Which Wich stores, Vickers explains. The drive-thru allows Which Wich to sell coffees and breakfast items in the morning without having to open the entire store. The first such stores were opened in Collierville, Tenn., and Tyler, Texas.

“The stores have been exceeding our expectations, even from an operational perspective,” says Vickers. “The ease of operation has been surprising. It has been easy to cross-train employees, and the guest response has been extremely positive.” 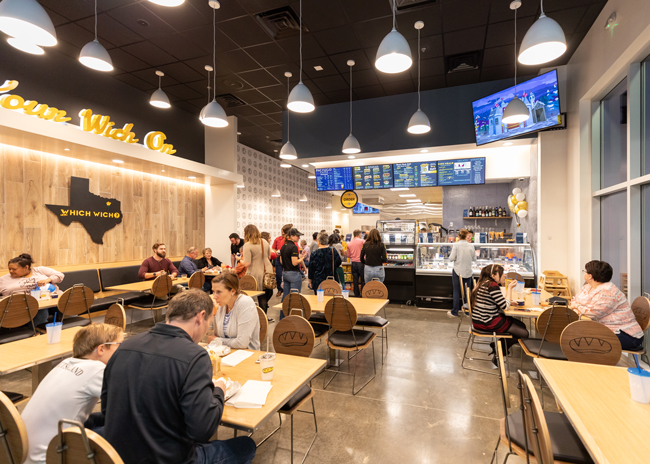 Jeremy Cook, Paciugo’s president, is equally pleased. “The acquisition has allowed us to turn the brand around,” Cook suggests. “We saw things that weren’t being used to the best advantage. We stabilized the brand, revamped the coffee program and improved our offerings, such as adding a gelato taco and a gelato cookie sandwich made with Oreos. The drive-thrus have been great for us. The question becomes, do we focus more on drive-thrus or on brick-and-mortar stores. We would love for all stores to make their own gelato on site, because it gives us more flavors and more flexibility. Which current Which Wich stores have enough space to make their own gelato?”

Cook adds that Paciugo has a 24,000-square-foot production plant in Texas, from which it makes the gelato that is shipped to its nontraditional locations.

One Which Wich store, in Allen, Texas, has been retrofitted with the Paciugo concept. Vickers notes that it was “very easy on the franchisee” to add equipment and still maintain the Which Wich identity.

“The great thing with Paciugo is that we can fit it into virtually any space, from 100 square feet to 2,500 square feet. It’s easy to drop in equipment,” adds Cook. “There is lots of flexibility, a lot of options with dipping cabinets and freezers. There is now even a circular cabinet that you can spin around to display the flavors to guests.”

Co-branding will be driven by franchisee interest and available real estate, says Vickers. “With site selection it is imperative that we capitalize on the core customer and ensure that we’re set up for success,” he explains. He adds that the company will also reach out to its nontraditional units to explore the possibility of adding Paciugo to those as well.

“The beautiful thing about co-branding is that it really opens up the ability for franchise development,” Vickers says. “Each brand has its following and they have the chance to become familiar with a brand they weren’t aware of.”

Which Wich Ways: Q&A with Which Wich president Cherry Hearn