San Francisco’s popular high-end Saison restaurant got its start as a pop-up, as did New York City’s notable Bruno Pizza. 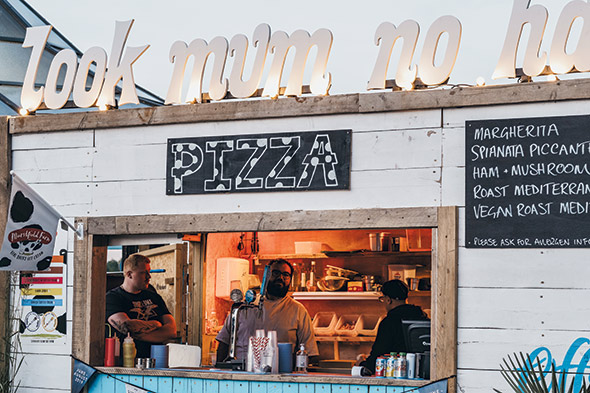 With 50,000 restaurants opening each year and 60,000 closing, according to the Washington, D.C.-based National Restaurant Association, testing the waters with a pop-up restaurant makes sense.
“Pop-ups are a win-win for operators and their customers,” says Hudson Riehle, the NRA’s senior vice president of research. “Operators obtain important market intelligence about their concept in a specific location and this may or may not translate into a full-time site.”

How to Pop Up

The evolution of mobile foodservice, first with food trucks and then with pop-ups or temporary restaurants, makes it more affordable for some entrepreneurs to enter the restaurant industry. “In many cases, pop-ups are run by entrepreneurs looking to make a smaller capital investment in a restaurant,” says Riehle. “We’re also seeing multiunit operators expanding their brands with pop-ups as they would with a food truck.”

In fact, food trucks have a lot in common with pop-ups. “Both emerge rapidly, engage consumer interest, then the operator determines if there is sufficient consumer demand to take their operation to the next level,” says Riehle.

Where they differ is the delivery vehicle. Unlike food trucks, which can move from region to region — often during the course of the same day — pop-up locations set up shop in different venues, like former restaurant spaces, empty storefronts and even shipping containers, and stay put for a set period of time. “Yet, the acceptance and regulations vary, depending on the community,” says Riehle.

Looking at implementation, the easiest way to facilitate a pop-up is to find a restaurant that will allow use of its space on the days it’s closed or to temporarily take over a closed restaurant space.

A big benefit of a pop-up is the flexibility, with variable hours and a short time in operation. “It can be a one-and-done, once a week for a month, but it most likely won’t operate for more than three months,” says Alan Someck, president/owner of Keystone Hospitality Solutions in Long Island, N.Y., who also serves as restaurant and culinary management instructor at New York City’s Institute of Culinary Education. He always presents his students with information on pop-ups. “Testing concepts is in line with a lot of thinking these days,” he says.

Someck lectures students not to get too excited about an idea without thinking it through first. “The first step is to be clear why you’re doing a pop-up and see if it makes sense,” he says. “The reason may be to test a concept, especially if it’s unique, in a relatively inexpensive way.”

Operators also should ensure the location can support a pop-up, even for a defined operating period. “With the high cost of restaurant startups these days, a pop-up is a good way to attract investors,” Someck says. “When they experience a concept firsthand, it’s more powerful.”

A restaurant owner may also consider a pop-up as another income stream for an existing concept. “This is needed these days with the price of labor and other costs,” Someck says. “Standing out in a busy marketplace is a challenge, so a pop-up is a great way to create an event that tests a concept, menu, pricing and everything that goes along with it.”

Noncommercial spaces, specifically in the business and industry segment, have become hotbeds for pop-ups due to the built-in clientele. “There is a lot of menu fatigue in corporate dining, and pop-ups are a good way to alleviate that,” says Russ Benson, founder/CEO of DayOne Hospitality Consulting in Libertyville, Ill. “It also helps keep employees on-site during lunch hours.

“In corporate dining, there are cafes outsourced to foodservice management companies,” Benson adds. “In this case, a space would be designated for a rotation of different pop-up restaurants. This is a great way for an established brand or chain to cross market in a vertical segment they can’t otherwise penetrate.”

It’s important to note that the nuances of service delivery and the financial landscape of commercial and noncommercial pop-ups are different. “About 60 percent of the time, the corporation may subsidize the dining program,” Benson says. “Yet, the third-party restaurateur has no risk in this environment as they are guaranteed a certain amount of money from their captive audience and are able to promote their items in a different environment. Employees are sequestered in terms of their food options, so anything that’s different will go over well.”

An important aspect of setting the stage for a pop-up is marketing. Fortunately, with today’s technology, this has become easier than in the past. “Ten years ago, without the current technology in place, the ability to market a pop-up would’ve been totally by word of mouth,” Riehle says. “Social media, smartphones and the ability to communicate on an immediate basis have contributed to the long-term viability of pop-up restaurants.”

From a foodservice equipment standpoint, the easiest route is to utilize an existing kitchen, whether in an open or shuttered restaurant space. “There are concepts that offer space for rotating pop-ups with permanent kitchens versus a single operator pop-up, where you’re either having to make do with a restaurant’s existing equipment or provide your own,” Riehle says.

Operators may need to adjust their menus to align with available equipment. “In many cases, the necessary kitchen equipment can vary dramatically based on the operation’s menu theme,” Riehle says. “Pop-ups can be specifically focused on a much narrower menu than is normally expected in traditional brick-and-mortar establishments.”

Given that pop-up restaurants have defined runs, some equipment considerations can differ when compared with traditional kitchens in place for the long-term. “If a pop-up is taking over an existing restaurant for a longer period — say, three months — a small investment in additional equipment may be worthwhile,” says Someck. “And if the operator opens up a brick-and-mortar restaurant, they can continue utilizing the equipment.”

Service and maintenance remain key factors, too. “The ability to have flexible equipment that requires minimal maintenance and servicing over the life of a pop-up is key,” says Riehle.

As always, it’s advisable to look at the long-term benefits rather than the short-term expenses when considering equipment purchases. “Fortunately, pop-ups don’t require full menus, and being more focused minimizes the necessary equipment,” says Someck. “Operators can get creative with their equipment use as well as construct a menu that takes into account the available equipment.

“The first issue is whether exhaust is needed and this is one of the biggest expenses,” Someck says. “Even if the space has exhaust, if it hasn’t been utilized in a while, the regulations may have changed. Operators need to make sure they’re abiding by local health and building codes as well as licensing.”

In addition, it’s important from a menu and equipment standpoint to take into account the skill level of the staff. “You want to put out food in a timely manner but still give it the ability to shine,” Someck says.

For established operators, pop-ups represent a more affordable way to expand a concept temporarily and make seed money before committing to a permanent location. And for those looking to establish a career as a restaurateur, a pop-up may be the perfect place to start.