Buffalo Wild Wings (BWW) regularly tweaks and refines its prototype and throughout the past several years has focused most of its efforts in this regard on two main goals: increasing efficiencies in the "heart of the house" and adapting its facilities to meet growing demand for takeout. 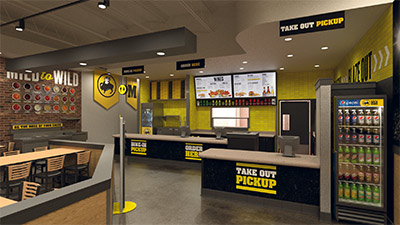 Built for speed and volume, B-Dubs Express is designed to facilitate takeout with convenient, clearly delineated express pickup counters. Photos courtesy of Buffalo Wild Wings"We've evolved our operations with automation and KVS [kitchen video systems] in our kitchens. We've also evolved our expo area, incorporating more advanced equipment and staging units for takeout orders," Kronebusch says. "They now go from finished product, to expo, to being bagged and tagged, to the cashier area and into a hot-holding or refrigeration unit to maintain quality. That's where we've spent most of our efforts, trying to create a better experience for customers who want takeout or delivery."

BWW takes its mission to grow with takeout a big step further with B-Dubs Express, a smaller, faster prototype that opened this summer in the Minneapolis suburbs of Edina and Hopkins. A third Minnesota unit is in development, and the chain is scouting additional markets in such metropolitan areas as Denver, Los Angeles and Dallas.

Measuring 2,400 square feet (compared with a traditional BWW unit of 6,000 square feet) and with seating for 40 (compared with a traditional unit's 250 seats), the new prototype's design emphasizes volume and speed. The quick-casual format uses trade dress consistent with BWW, and each of the first two units includes a small selection of beer and a few TVs to cater to the chain's sports-fan base.

The menu is 60 percent smaller than a traditional unit's, with 80 percent of sales being wings or boneless wings. Kitchens measure less than 850 square feet, and operations now enable staff to do more with less.

"For example, because we have less freezer capacity, items we'd normally cook from a frozen state are being cooked from a thawed or slacked state," Kronebusch says. "Our challenge is to look at product platforms that we've always had and find ways to do things differently."

In the front of the house, a separate staging and pickup area lets order-ahead customers get in and out quickly, or simply pick up their orders and find a table to eat on-site.

Kronebusch says that even the company was surprised by the new prototype's performance. "The Hopkins unit, opened in August, is our number one restaurant in orders place digitally," he says. "Day one was an $8,000 day, $6,200 of which was takeout, and sales are since running 75 percent takeout."

Based on learnings from the first two units, the design of the third is being tweaked. It will be slightly larger — 2,900 square feet — and the company is considering enhancing the experience with a self-serve draft beer section. To better accommodate the larger-than-expected ratio of takeout to dine-in customers, the redesigned counter will promote better flow, with more space for takeout orders. The third unit will test kiosk ordering as well.

Delivery, which Kronebusch describes as being at the "tip-of-the-iceberg" stage, is under review. Currently handled through third-party partners, the company plans to test dispatch models and its own drivers this fall. As delivery grows, he expects further modifications to the prototype.

"It's still a work in progress,"Kronebusch notes. "We'll probably have four or five of these prototypes built before we hit on one that actually has everything we need and is the one we'll move forward with."