From frothy nitro coffee to strong and nutty cocktails, nitrogen-infused drinks ramp up faster than the craft beer revolution. 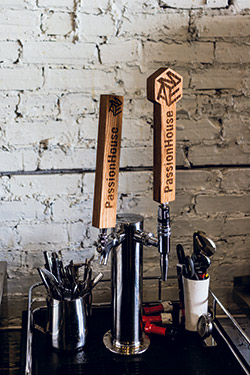 Most of us think of Guinness when picturing our first nitro-infused beverage, with its velvety texture and creamy head and finish. Nowadays consumers have multiple ways to enjoy nitro-style beverages, from coffee to smoothies, which offer a similar mouthfeel and presentation as Ireland's prized beer.

Drinking nitro coffee affords the same type of beverage experience as that familiar stout beer, though it's produced in a slightly different way. There are essentially three ways to make nitro coffee. All three require the use of cold brew coffee, which is coffee made without heat using freshly ground beans steeped in room temperature, filtered water for 12 to 18 hours and then drained and chilled.

In the first method, a smaller keg is filled with the cold brew two-thirds of the way, and then hooked up to a nitrogen tank with about 45 to 50 psi. The keg sits on its side for two days to help the nitrogen move more easily throughout the liquid. Then, the keg is hooked up to a nitrogen tap for serving. One downside to this method is that the product must remain cold throughout the two-day process.

The second method also involves a smaller keg but an attached carb stone forces the nitrogen into the tank, starting with a few psi at a time, gradually climbing to 50 psi over the course of an hour. The downside with this method is that the tank has to be filled to the same height every time and the pressure adjustments have to be consistent. The temperature of the cold brew coffee in the keg should be at about 38 degrees F to 40 degrees F before adding nitrogen pressure.

The third method delivers nitrogen instantaneously to the amount of coffee drawn through the keg. This system uses a small box attached to the side of the keg where the cold brew coffee is pumped with nitrogen before going through the tap.

When it comes to tubing, one expert technician in this area recommends a barrier tubing with lining on the inside rather than vinyl, which is used for beer and soda. The reason? Barrier surfacing looks more like glass and helps prevent oxygen from getting into the liquid, which can make it taste stale.

Some nitro coffee equipment will use bag-in-box (BiB) systems instead of kegs for a super-concentrated solution that operators can mix in different ratios with filtered coffee. Operators can hold BiB nitro systems for longer periods of time because the product remains refrigerated.

Operators should quickly serve nitro coffee — it will only last two days max until it starts to go stale. For in-house service, some restaurants will serve the coffee in a curve-shaped, Belgian beer glass, which helps maintain the froth. The nitrogen creates such a smooth flavor and creamy consistency that adding extra milk or cream is not recommended.

At the artisan Passion House Coffee Roasters in Chicago, founder Joshua Millman makes his nitro coffee by first steeping fresh-roasted beans in filtered water for no more than 10 hours to "maintain more nuance in flavor" for the single-batch Ethiopian coffee beans he uses. He then transfers the coffee to a tank and infuses it with nitrogen for 48 hours by placing the keg on its side in a refrigerated area of the roasting facility. At the coffeehouse, the tank sits in an undercounter refrigerator and a line is drawn up to the nitrogen tap to push out the coffee. "Infusing the coffee with nitrogen first, even though you're using a tap, makes it more stable and gives it a better texture," he says.

For maintenance, avoid chlorinated solutions because they can damage the stainless steel of the keg, kegerator and other parts. Instead, one expert recommends ammonia or a caustic solution such as sodium hydroxide. Operators should rinse kegs in-between each use, and clean them every two weeks with about 1 percent caustic solution mixed with water.

One recommended way to clean the tank system is to maintain a separate canister for the cleaning solution. Then, simply pour that into the keg and pull it through the draft as if serving a cup of nitro coffee. Remove other parts, like the disc on the nitro tap, and set overnight in a mix of warm water with health-department approved sanitizer or carbonated water.

Beatrix in Chicago combines its nitro coffee, tapped at the restaurant's barista counter, with a puree of almond milk, hemp seeds, dates and banana in equal portions. The restaurant starts with a local roaster's cold brew coffee in a keg infused with nitrogen, set in an undercounter refrigerator, and then hooked up to a nitrogen tap system at the coffee bar. The restaurant serves the coffee smoothie in a pint glass, while the coffee bar serves it in a 20-ounce plastic cup for takeout.

"We don't have blenders at the coffee bar, so this is our take on a coffee smoothie," says John Economos, general manager.

In the fall, Beatrix offers a pumpkin whipped cream nitro drink, along with a caramel cream one with fresh caramel syrup and vanilla-infused whipped cream. 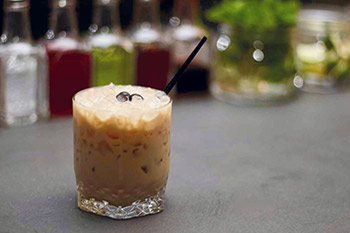 The Nitro Russian, a caffeinated version of a White Russian, at Revival Cafe-Bar. Photo courtesy of Hot ChocolateAfter a scare in Lancaster, England, in 2012 when an 18-year-old had to have her stomach removed after ingesting a drink infused with liquid nitrogen, many bartenders have shied away from the stuff. They've had similar reservations about dry ice cubes, which can cause stomach lining burning if accidentally ingested.

Now, a former mixologist and manufacturing expert have teamed up to launch a two-part system that uses a canister to hold the cocktail and a dry ice charger/container at the bottom with a cylindrical opening that allows the gasses to escape for show, but does not mix the dry ice with the actual cocktail. The system works for making smoking drinks and ice cream concoctions, as well as carbonated drinks.

At the Cosmopolitan in Las Vegas, mixologist Marina Mercer has made an alcoholic ice cream using liquid nitrogen with the creamy base and allowing the gasses to burn off completely before serving from her tableside cart.

Some bars have experimented with kegging cocktails first, and then hooking the keg up to a nitrogen draft system to add the frothiness just before service.

Nitro cocktails can also be safely made with nitro coffee as the base for the smooth texture and subtle coffee undertones. Revival Cafe-Bar, the all-day cafe located in Revival Food Hall in Chicago, offers progressive presentations of classic cocktails, including the Nitro Russian. The drink is a caffeinated spin on a White Russian. The cocktail mixes vodka, a chicory-flavored coffee liqueur, half and half, and demerara sugar. It comes off the draft line without any previous dilution, and then it is poured over crushed ice and served. The keg is charged with a standard N2/C02 blend, then pushed through an N2 draft line.