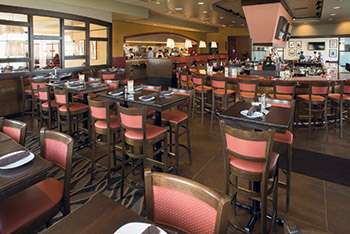 The concept's success to date serves as a bit of a thumb in the eye to those who maintain that casual-dining restaurants are a dying breed. 110 Grill's average unit volumes approach $4 million, and the company remains primed for aggressive growth. What's more, its upstart success storyline focuses exclusively on suburban and secondary markets.

Currently at nine units, four of which opened in 2016, the privately held chain has now hit an expansion stride of one new unit per month. It's a rate that Co-Founder and Chief Operating Officer Ryan Dion feels the company can sustain, at least through much of 2018. New openings for the balance of this year include Massachusetts locations in Fall River, Marlborough and Athol, as well as a Stratum, N.H., site. Additional Massachusetts sites confirmed to open next year include units in Worcester, Maynard and Wrentham. While nothing's definite yet, Dion and his business partner, commercial real estate developer Robert Walker, are also exploring expansion opportunities in upstate New York.

"We love to go to areas that are lacking in restaurants, and they still exist around here," Dion says of the company's secondary market growth strategy. "Our fourth restaurant, for example, is in Hopkinton, Mass. We're one of very few restaurants in town and certainly the only upscale-casual place in the area." 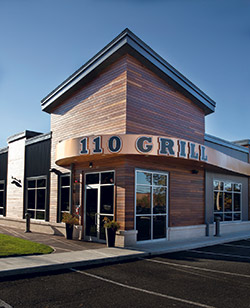 Averaging 5,800 square feet plus outdoor patio space, most units are either freestanding buildings or shopping-center endcaps.The target market strategy of 110 Grill keeps development costs in check and suits its largely local and community-driven marketing approach. Alicia Puputti, director of marketing, says social media and public relations play big roles in that approach, but local store marketing and participating in events — particularly those at which 110 Grill can connect directly with guests and offer samples of its food — are especially valuable.

"We're really passionate about being a key member of our local communities," Puputti says. "We don't do any large-scale advertising or discounting, but we love local competitions and sampling events. We win a lot of awards at those that we can leverage afterward in our marketing programs. We also have a very popular loyalty program. When members spend $110 on food and nonalcoholic beverages, they receive a $10 award."

110 Grill's site-selection strategy also enables the chain to make a big splash in its smaller, more suburban locales. When the concept comes to town, it offers a menu and an environment that work for everyone looking for something a little bit special close to home. "Here, you can come in shorts and sandals and have a burger and a beer at the bar or on the patio. You can also come in a business suit and enjoy an appetizer, a $32 ribeye and a nice bottle of Duckhorn cabernet. Either way, you fit in here, and that's a unique place to be," says Dion.

The concept's broad menu focuses on scratch-made specialties and up-market interpretations of casual-dining classics from flatbreads and salads to burgers, sandwiches and entrees. Best-selling signature items include appetizers like Asian calamari and tater tot poutine and entrees such as bourbon-marinated steak tips, cucumber and avocado tuna, chicken caprese Parmesan and sesame ginger salmon. Local sourcing takes precedence and many parts of the menu change seasonally.

Dion says 110 Grill also prides itself on its commitment to accommodating guests with food allergies. All managers have current certifications for food safety and allergen awareness, and all employees receive extensive allergy-awareness training to ensure guest safety. Fully 100 percent of the core lunch and dinner menus is naturally gluten free or can be modified to be so. Culinary staff prepare all dishes to order from scratch, and only managers deliver dishes to guests with food allergies or sensitivities.

While 110 Grill's debut unit involved remodeling and reimagining an existing failed restaurant location, all subsequent units were built from scratch. Most reside in shopping centers in either endcaps or freestanding buildings. "Our favorite sites are stand-alone restaurants, but that's not always possible," Dion says. "If we're going to grow quickly, we have to adapt. We've learned to be flexible with our prototype depending on what's available." 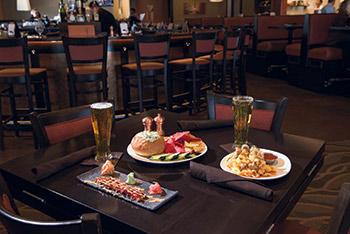 110 Grill’s menu focuses on scratch-made specialties and up-market interpretations of casual-dining classics.The restaurants average 5,800 square feet and all incorporate signature 110 Grill features. Top among these is a central, 30-seat U-shaped bar with a distinctive red top. Dion says that bar sales comprise roughly 30 percent of revenues at an average restaurant and that 85 percent of guests who sit at the bar choose to dine there as well.

Each restaurant also features multiple seating areas that suit different types of guest occasions, including a private dining room and an outdoor patio. Patios seat roughly 50 guests and offer an extra serving of ambience thanks to tiki torches and a fire pit surrounded by lounge-style seating.

Another focal point in each 110 Grill is a large open kitchen with high-top seating in front. "Our kitchens are essentially part of the dining room, and like the bar, they add a lot of energy to the experience for guests," Dion says.

The chain's cook line structure replicates easily from unit to unit as 110 Grill expands, Dion adds. Each cook line has four key stations: pantry, fry, grill (flattop and charbroiler), and saute. During a typical busy shift, two people work every station. Orders from all stations are sent to a center assembly station before they're staged in the window to be checked by a manager and then delivered to the table. A large computer screen at that assembly station organizes and times every order coming into the kitchen.

"Basically, we have standard kitchen equipment laid out in a very efficient design," Dion notes. "We continue to refine our operations and to keep up with what's new and what might help us improve our systems, but when we're opening a restaurant a month, at this point we don't try to recreate the wheel every time. Our structure works and we're focused on consistency."