NRA Show speaker offers ideas on how to connect with sought-after generation.

Right off the bat, Jason Dorsey told the NRA Show crowd that “everything you have heard about Millennials is wrong.” He spoke Sunday, May 21, as part of the National Restaurant Association’s Signature ’17 session. 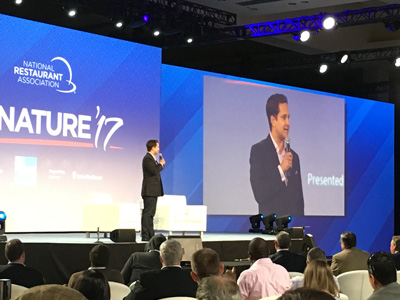 Dorsey, co-founder and chief strategy officer at The Center for Generational Kinetics, went on to explain that not all Millennials are broke, per the ongoing assumption, and that not all hold the grandiose sense of entitlement that is widely perceived.

Dorsey pointed out that while many Millennials certainly have college debt, they also outspend all other generations in restaurants — just don’t expect them to pay cash.

On the idea of entitlement, Dorsey joked about the attitude of Millennials that they should be promoted to manager after two weeks. While there may be a bit of truth to that, he also pointed to Baby Boomer’s parenting philosophy of wanting things to be easier for their children than it was on them as part of the rationale behind that sense of entitlement. “Entitlement is a 100 percent learned behavior,” he said. 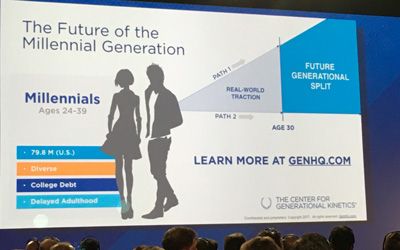 This slide shows the generational split that happens among Millennials around age 30.

Looking at the younger Generation Z group, Dorsey said this group will “leapfrog Millennials in the workforce” larger due to a strong work ethic. Gen Z is more willing to accept any job and by and large does not hold the same kind of entitlement attributed to Millennials. They are also a very frugal generation, he added.