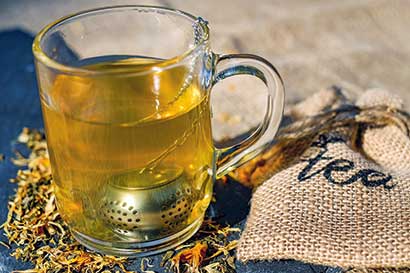 It’s more of a steady climb as opposed to explosive growth, but consumer interest in higher-quality teas and loose leaf tea continues to grow, particularly as many look to improve their diet and explore new flavors in beverages. Many loose leaf and natural tea varieties have been found to offer many nutritional benefits in the form of antioxidants and cleansing properties.

For centuries, people in Chinese, Japanese and Indian cultures have enjoyed teas for different medicinal and other health and wellness needs, such as calming stress, boosting fertility and treating common ailments.

Many teas (black, oolong, green and white) come from the same plant, the Camellia sinensis or “tea bush.” The difference stems from how they are processed, according to retailer Adagio Teas. The level of oxygen absorbed by the leaves during processing (fermentation) is the determining factor, leading to dark-colored black teas or lighter green teas or even lighter white teas. Scented tea requires additional flavorings that producers mix with the leaf as a final stage before packaging. For example, a producer might add jasmine blossoms to green or oolong tea. Fruit-flavored teas are often made from essential oils and black tea.

These days, higher end coffee/tea shops and restaurants prefer loose leaf tea versus tea bags for more concentrated flavor, antioxidants and freshness, not to mention that it is not always possible to funnel higher quality tea leaves into a commercial-grade tea bagging machine.

“Great tea starts with having a great producer,” says Tom Santelle, director of coffee and tea for Band of Bohemia, a restaurant and culinary brewery in Chicago. “You can do as much tasting as you want, but if you haven’t taken the first steps to find great producers who are really focused on the quality it won’t do anything for your tea service. Tea, like coffee used to be, can be an afterthought and I believe that is a disservice to diners.”

Santelle prefers teas that are more mineral forward in taste and have a sense of place and a good story, just like a fine wine. He ditches tea bags and even many dried loose leaf versions for fresh leaves that he can infuse himself, working with Spirit Tea, a small, local wholesaler that works directly with smaller market/small batch growers.

“We only carry about five teas at any given time so we can have a quick turnover and maintain freshness,” says Santelle. “Tea really is just a plant, with leaves, buds, twigs and other parts.  Using loose leaf tea really shows off the beauty of the plant itself, especially if it’s been well cared for.” 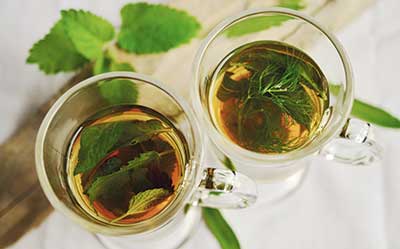 At Band of Bohemia, Santelle favors the Iron Goddess of Mercy, an oolong varietal with a rich aroma and floral notes produced out of Anxi County in the Southern Fujian province of China, where the mountains provide an idyllic tea-growing environment with high elevation, rich soil and a mild climate.

He also offers Black Pearl, another oolong from the same region that's placed in a bottle with a starter sugar and champagne and left to ferment to create a slightly effervescent, cognac-like taste that's best served chilled.

Loose leaf pu-erh teas sourced directly from artisan farmers consist of aged leaves that undergo a natural fermentation process before producers gently dry them to create a deep, rich taste without any astringency. In Asia, pu-erh teas are also known for their slimming and medicinal properties, according to Adagio.

Hailing from South Africa, red bush tea is a caffeine-free tea with a slightly sweet taste and high mineral content with many antioxidants.

India is the world's largest tea producer, exporting primarily black teas such as Darljeeling, Assam and Nilgiri. An Indian green tea sourced directly from an organic grower in Nilgiri intrigued Marisa Paolillo, owner of the recently opened Mango Pickle, a modern Indian bistro in Chicago. Not as well known for its green tea as China and Japan, India's version has a straightforward herbaceous flavor without any bitterness. Paolillo follows traditional loose leaf preparation for this tea, bringing filtered hot water up to a boil and pouring it over the leaves in a glass tea pot with a built-in infuser. After a few minutes, she strains the tea into serving cups, skipping the sugar or milk she might otherwise use for a Darjeeling, which can dilute this tea's delicate taste.

Paolillo also offers a tisane, or herbal-infusion tea, sourced directly from an organic grower friend in the Himalayas. This caffeine-free, green leaf tea, also referred to as "sacred herb," "inverted dendrim" or "holy basil" has a slightly sweeter and botanical flavor. Many Indians incorporate it into prayer ceremonies and drink it for its medicinal, immunity-boosting properties.

Madame ZuZu's gourmet tea shop, opened several years ago in a Chicago suburb by Smashing Pumpkins lead singer and musician Billy Corgan, who sources unique barrel-aged tea from Rare Tea Cellar. Known for supplying the finest and rarest teas on the planet, Rare Tea Cellar owner Rodrick Markus ages the tea leaves in California oak barrels, which impart an elegant scent into the tea when left to age for close to a year.

Cocktail makers have sought out tea as a natural ingredient for their creations. At Band of Bohemia, one oolong tea, called Iron Goddess, cold steeps in Fords Gin for about a week in cans or jars for use in the peppery Guanynin Milk Punch.

Many Milwaukee bartenders reach for locally produced Rishi Tea to step up simple syrups and spike drinks with Italian amaro and French vermouth.

At Abajo at Añejo in New York, Will Aporih has created a cocktail with bulldog gin, matcha tea, housemade thyme syrup, lime juice and club soda for an umami-spiked drink brightened by the citrus.

Tea menus are becoming more diverse as operators continue to add more specific and traditional ethnic tea offerings. However, well-known varieties such as green tea, black tea, and chai, continue to earn the top spots on menus. Take a look at some of the most trending hot and cold tea types and their percentage increase in menu mentions over the past year. 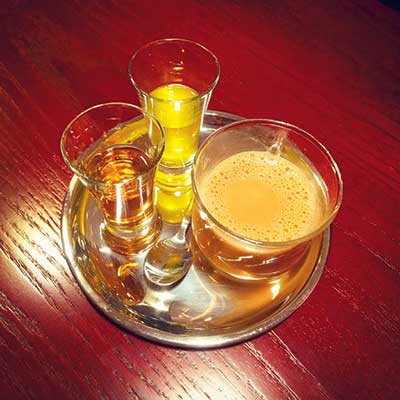 Marisa Paolillo of Mango Pickle relies on an age-old recipe from her husband’s grandmother to serve a traditional masala chai tea during her tea time service, something that’s thought of as the fourth meal when served with snacks in India. “Most teas you don’t want to steep too long, but in this case, you do actually want to boil the mixture a while and even scorch the milk,” says Paolillo. She brings filtered water and spices like cardamom, clove and black pepper to a boil for some time, adds cold milk, and then brings the tea back up to a long simmer to coax out a rich, caramelized flavor.