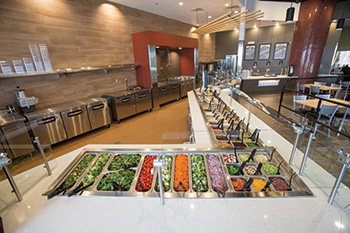 No one knows for sure when Souper Salad last introduced a new prototype.

It’s been at least 18 years, though. That’s how long Director of Operations Yvette Martinez has been with the chain. While there have been changes at the fringes — new paint here, new carpet there — an entirely new design hasn’t been introduced in all that time, she says.

That’s when the all-you-care-to-eat buffet concept rolled out the first of its new-look stores — a franchised operation in McAllen, Texas.

According to Craig Erlich, president of Dallas-based BRIX Holdings, Souper Salad’s owner since 2014, the reasons for redesigning the concept were obvious. The chain would become more efficient by adopting technology and operational advances developed during the past several years. At the same time, a redesign would help meet customers’ evolving expectations for a dining experience, including a space’s appearance and ambiance. A concept with a design that’s at least 18 years old can fall short in both areas.

Souper Salad had deeper reasons for making the change as well. The chain has long handled nearly all food preparation and production in house. While today’s customers recognize such initiative, they did not recognize it in Souper Salad.

The new design addresses all these goals — operations, customer expectations and assuring full credit for food quality — in one package. 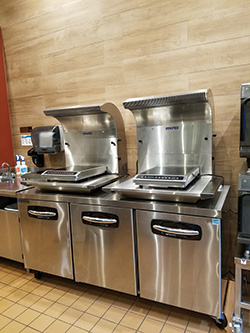 The larger induction burners have bases with built-in hoods that do not require venting to the outside. This saves money and provides flexibility for future changes to the kitchen.The new Souper Salad design connects all three goals.

Grays appear in the metal chairs with black upholstered seats at the operation’s two- and four-top tables. Browns come primarily from the light wood tabletops and the darker wood-style ceramic tile flooring. The tile was chosen because it is “food friendly” and ages better than the carpet used in older stores, according to Mike Zwilling, construction project manager for BRIX Holdings.

The operation also went from a closed ceiling to an open one that is painted black, with black pendant lights and floating white soffits in geometric shapes.

Erlich explains that these design choices “make the appearance of the location so much bigger. We strategically designed it so there are windows along the perimeter of the dining room. That allowed us to utilize the side that doesn’t have windows for our prep and meal stations, so the dining area is well lit and inviting.”

This starts at the point-of-sale station. Relocated from the buffet line, the station has its own small island, which customers immediately encounter upon entering the store. Black metal rails that run toward the back wall of the restaurant create a POS queuing line for high-volume periods.

The POS station becomes small potatoes, though, when compared to the other major change introduced to improve flow: a complete redesign of the buffet.

Some legacy Souper Salad restaurants have multiple, two-sided island buffets: one island for salad, one for soup and one for other hot items such as bread and pizza, according to Erlich. With this design, customers sometimes think (erroneously) that they must walk down both sides of each island to see all their options. Or they may sit down with a full meal, only to realize there are entire buffet stations they hadn’t even seen.

The new prototype combines all three buffets into a single one-sided line with roughly a V shape. “With this new design, you’re picking out all of your meal in a line,” says Erlich. “You get to see all of it. Then you pick out your dessert and beverage and go to the dining area. Since it’s all-you-can-eat, it’s very easy for someone to go back in line and go through that flow again.” 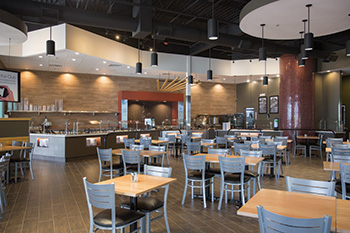 By eliminating island buffet bars, the chain has simplified the flow of interior traffic.Souper Salad’s redesigned buffet starts with the cold bar, where customers can make salads with various lettuce bases, vegetables, cheeses and dressings.

With the goal of showcasing the freshness of its food, all the prep work for the cold bar takes place directly behind this section of the buffet. As with all three prep/production stations, the bulk of the equipment sits against the back wall, with team members facing away from customers while using the equipment.

The short end of the L-shaped prep station for the cold bar sits perpendicular to the start of the buffet line. The station hosts a hand sink, vegetable sink and 60-gallon salad spinner that rolls under the sinks’ shared table. The long end includes worktables with undercounter refrigeration. Staffers working at these tables use a food processor to slice and dice vegetables. After stocking the cold bar, staff store backup food items in the refrigerated doors below the tables. The station also hosts an extra worktable on casters, which speeds preparation in a crunch.

Following the cold bar prep is the soup/pasta station. Each day, Souper Salad makes five soups and six pastas (served cold on the salad bar) fresh in house. This station houses the biggest change to Souper Salad’s kitchen: induction cooking technology, this time in the form of induction burners.

The shorter cooking times offered by induction — a huge bonus in an all-you-care-to-eat buffet — are the number-one reason for the switch, according to Martinez. The technology offers other key benefits, though, including energy efficiency. Unlike induction, gas cooking by its very nature wastes a significant amount of heat, which operations pay for in the form of utility bills.

Eliminating heat waste proves extra beneficial in Souper Salad’s new design. With all cooking now in the front of the house, gas-fired equipment would have pushed up the temperature in the dining area, forcing the chain to spend more on air conditioning. No gas equipment means no rise in temperature.

Then there’s the hood factor. Below a certain wattage, induction equipment does not require a hood, Zwilling notes, so moving to induction eliminated the need for a large overhead ventilation system, resulting in big savings.

The soup station at Souper Salad has a total of six induction burners, all of which are put to use during prep shifts. Four of these burners are sized for 10-gallon stockpots, while the remaining pair hold 15-gallon pots.

The high wattage of larger units require ventilation, notes Zwilling. The solution: a base that the burner sits on with a built-in proximity-style hood that curves over the unit. “It comes up the back and the hood is just above [the burner]. If you look at the side profile, it’s kind of like a ‘C,’ ” Zwilling says. This hood basically filters the air and does not need to be vented out the ceiling or wall.

The burners aren’t the only induction units at the soup station. That section’s buffet, which bubbles out slightly, has five drop-in bains-marie that use induction technology as well. These replace both steam and electric units that are found in other stores.

Not every piece of hot equipment in this section uses induction, however. An electric steam table holds the large batches of soup the restaurant makes each morning. The chain chose electric over induction for one reason: size. “Induction technology is still relatively new. There aren’t a lot of different size options available,” Zwilling says. “Since size is a concern, we had to switch back to the traditional steam pan.” This, he added, serves as a lesson for others considering moving to an induction kitchen: While the technology has clear benefits, be ready to design around the size limitations of available equipment.

Following the soup station in the third and final section of the buffet line and the kitchen is the hot station. Here customers can get fresh baked breadsticks (received parbaked) and three additional types of bread (made with a proprietary mix using a bowl and whisk). The hot bar also offers items like pizza, baked potatoes, tacos and more.

At the hot station both the buffet and the food prep/production areas rely on induction.

The hot production station relies on two induction ovens, stacked one on top of the other. Ideally, stores with the new design will have three such units, Martinez notes, but one was cut out of the McAllen store due to space limitations.

The station also makes use of a prep table with undercounter refrigeration. These units hold, among other items, fully prepped pizzas, which can cook in just 90 seconds in the induction ovens. Once done, they are kept in a hot holding unit, where they can quickly transfer to the buffet when needed.

The buffet itself has two induction wells, each four inches deep, for items such as tacos and baked potatoes, and three countertop induction plates for holding breads and pizza.

Using induction on a buffet offers many advantages, according to Martinez. Compared to drop-in steam tables, induction buffets allow for the use of different types of holding vessels, making for a more aesthetically pleasing display. They also hold food to the exact degree desired by the operation.

But the biggest benefit, says Martinez, lies in the cleaning. “The maintenance part is much easier than having steam wells with water — having to drain those, clean those out. [Induction] is a much easier cleaning process.” Cleaning time for the hot buffet, in fact, has been cut in half with this new design, she says. 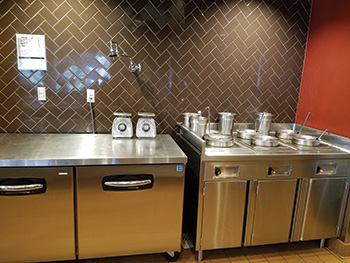 Due to size requirements, the soup station relies on an electric steam table, one of the only pieces of non-induction hot-side equipment used by the chain.While this first redesigned store has only been open a short time, response so far has been positive. Martinez in particular has visited the location a number of times and observed smoother customer traffic and overall upbeat responses to the new look from guests.

With Souper Salad’s new prototype set, the company has already added on new challenges. One of the next big projects: figuring out how to implement this design in existing stores.

Such retrofits pose significant, though not insurmountable, design challenges. The construction and operations team will need to figure out what elements of the prototype’s new buffet and kitchen can be made modular and remade to work with island buffets. The chain will also need to devise ways to move food prep and production from the back to the front of the house, says Erlich.

“Some locations have the back of the house right behind the bar. That might just [require us to] knock down a wall, change out some tile work and finishes, and make sure it’s presentable to the customers. In some of them the back of the house is deeper in the store, so you’d have to make some more modifications. It’s kind of a one-off … but we can figure out what parts can be modular and can be added in specific locations,” Erlich adds.

Despite the challenges, several existing franchisees are expressing interest in retrofitting their stores. Even better, many franchisees are now talking about opening entirely new stores based on this new prototype.

“Based on the feedback we’ve gotten internally and externally, we feel very good about the future of Souper Salad,” says Erlich. “We have some franchisees that are looking to add locations. That always tells you something, when you have the credibility of the existing system that is reenergized about the future of the brand.”