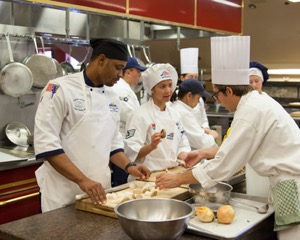 The annual forum fills a crucial gap in providing military foodservice personnel skills that can eventually translate into restaurant careers, said Rob Gifford, executive vice president, NRAEF. “With the restaurant industry thriving, these culinary educational sessions will help our servicemen and women build rewarding careers — both during and after their service to the nation.”

More than 250,000 military veterans are currently employed in the restaurant industry, according to the National Restaurant Association, which estimates that number to increase by 25,000 in the next 5 years.