Pei Wei Gets a Makeover

This fast-casual pioneer is updating its look and emphasizing its made-to-order menu. 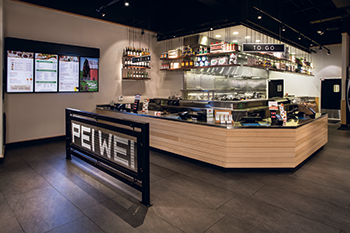 The new design gives customers a clear view of the display kitchen.If one were to make a list of restaurants that embody what fast casual can be, Pei Wei Fresh Kitchen would be on it.

With its made-to-order menu and sophisticated restaurant design, Pei Wei has grown to more than 200 units — nearly all company-owned — since its founding in 2000.

Of course, 2000 was a long time ago. Over the past 16 years, what customers want in a restaurant has evolved. Now Pei Wei is evolving as well.

“We’ve got some dated restaurants,” says Clay Dover, chief marketing officer. “It just is time for a bit of a refresh and redesign . . . of the brand experience and the environment in which we were speaking to our guests.”

As with any good redesign, Pei Wei’s new look stresses the brand’s strengths, some of which customers might not know about.

In this case, the design shows customers they can customize most of the chain’s menu items. Through images and layout, diners learn that they can ask for less heat with their pad thai, or no peas in their kung pao. The chain also strives to show that at Pei Wei each item gets made fresh to order and is not just scooped out of a pan sitting in a steam well.

Stressing these attributes didn’t require a complete tear down of the chain’s previous design. In fact, Pei Wei’s old look and its new one share some important features. Both have display kitchens with wok cooking, and both use design elements that emphasize the chain’s Asian roots.

Look just a little more closely, though, and you’ll see some major differences.

These are visible in the light wood chairs and tables the restaurant now uses, as well as in the tan shades on the pendant lighting. The ordering counter features a matching shade of wood and a stainless steel top. A wood-style tile serves as the flooring.

The space features a new overall layout as well. In the previous design, high partitions partly concealed the display kitchen. Customers in the ordering line could see only some of the culinary action, while those who were seated saw even less.

The new setup includes lower partitions and clearer sight lines. “One of the things that appeals to our guests are the sights and the sounds of the wok . . . We wanted to showcase that. We wanted to accentuate some of the fresh product that’s in our restaurant,” Dover says.

The wall decor further reinforces the freshness of Pei Wei’s food. Out are the black-and-white images of rice fields and Asian villages. In are dramatic color photos of wok cooking along with close-ups of fresh ingredients. Suspended from the ceiling and surrounding the display kitchen are shelves showcasing ingredients like bottles of sriracha and soy sauce.

The photos and these displayed ingredients, says Dover, subtly reinforce to customers that their food is made to order using fresh meats and vegetables. Made to order, of course, goes hand-in-hand with customizable, another aspect of the Pei Wei menu that the company wants to communicate through its new design.

While showcasing cooking and ingredients helps diners know they can customize their orders, the design also lets the chain communicate this more directly. This takes place primarily through the electronic menu display, which now includes a fourth monitor. Pei Wei uses this monitor to convey important brand messages, like freshness and customizability, as well as news about limited-time offerings, fundraising events and more.

Direct communication of this brand message also comes through the dining area’s brick logo wall, which displays the chain’s logo in red, along with the tagline “fresh, fast, made for you.” 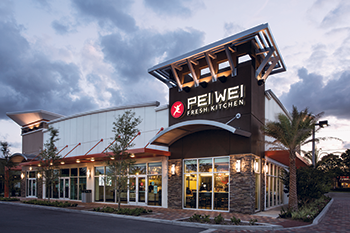 This fast-casual pioneer is updating its look to emphasize freshly made food and a customizable menu.Pei Wei completely reworked its display kitchen in this new prototype.

The setup of the wok tables represents the biggest change. In the previous design, the woks were placed along the wall, with kitchen staffers standing between the customers and the woks. This prevented diners from taking in the full drama of wok cooking.

Now, two wok tables, each with three burners and a stockpot, sit on an island in the middle of the display kitchen, with the wok cooks at each table working face to face. This gives customers a full view of the “theatrics of cooking,” says Kelly Kjolhede, Pei Wei’s vice president of training. “When the guests walk up to the front counter, they have a clear line of sight into the kitchen, and the woks and the flame are really going to be center stage,” she says.

How Pei Wei handles food prep represents another big change. In the previous design, most ingredients were prepped in the back of the house and then moved to the front. In the new setup, prep space is up front, allowing team members to do the cutting and slicing in full view of guests. With prep performed every shift, Pei Wei now gets credit for the work it has always done, says Dover.

“We’ve kept [prep] in the back, and we’d bring out a plate, and we’ve expected guests to go, ‘Oh, wow! This was made fresh.’ What our study says was that a lot of our guests did not know that,” Dover adds.

This prep work takes place at two stations, one one each side of the wok tables. To the left is the pantry. This station starts with a two-basket fryer, where staffers cook egg rolls, crab wontons and other items.

Following the fryer is a refrigerated worktable with cold wells on top. This table has one refrigerated door that holds ingredients for refilling wells, as well as two refrigerated drawers — one for sushi, which is rolled in-house, and one for cold appetizer items like spring rolls. In the previous design, notes Kjolhede, this table was a custom piece. The chain has specified an off-the-shelf unit for the redesign, which helps cut the cost of the equipment package.

Next to the refrigerated table is a worktable with space for a cutting board and a built-in steam well. Staff members use the cutting board to prep ingredients used in the pantry station, while the steam well holds two soups (usually hot-and-sour and Thai wonton). The table also holds a small countertop unit that Pei Wei uses to steam edamame.

The other prep area, to the right of the wok island, is little more than a worktable. Under the counter resides a small electric convection oven staff use to make cookies. Rice cookers sit next to the table.

Items prepped here are sent to the drahma station, which butts up against the back of the wok island. Like the pantry, this station consists of a make table with cold wells and undercounter refrigeration. And again like the pantry, the chain has gone from a custom to a standard unit here, cutting costs further. 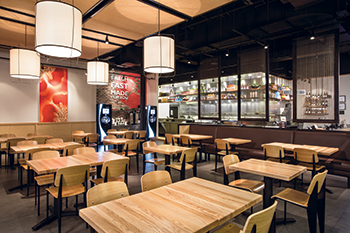 The chain has dropped its red-and-black palette in favor of lighter, more natural browns and tans.With a redesigned kitchen, the chain has naturally remade its workflow. Its new processes, says Kjolhede, are more efficient and help improve order accuracy.

With prep taking place up front, for instance, it’s now much simpler and smoother to restock ingredients. Instead of taking 50 steps, a staff member can now do the job in 5.

Eliminating the inside expediter position introduced other efficiencies. In the previous setup, this person would help manage the flow of work in the kitchen, pass each dish’s assembled ingredients from the drahma station to the wok cooks, and identify when it was time to restock the raw ingredients.

Now the staffers working the drahma station pass assembled ingredients directly to the wok cooks. The cooks plate finished meats and vegetables and pass the food to the outside expediter. This staffer adds rice on the side and then sends the order to the dining area or bags it for the takeout customer.

According to Kjolhede, reducing the number of people and steps involved in creating a dish makes the kitchen more efficient and reduces the chances for errors. And when mistakes occur, they are easier to correct. If the wrong type of rice gets put on a plate, for example, crew members can simply replate the order with the correct rice. 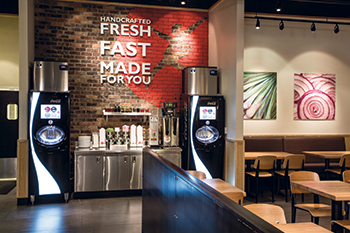 The chain’s logo wall communicates both freshness and customizable food directly. Close-up photos of ingredients to the right are intended to convey the same message in a more subtle manner.It should be noted that how well this new workflow actually serves the company hasn’t been fully determined yet.

That’s because Pei Wei’s redesign has taken place in two stages. The new look for the dining area was introduced last year and can now be found in about 20 stores. The redesigned display kitchen and back of the house, however, rolled out just a few weeks ago in only one store in Jacksonville, Fla. The second redesigned kitchen is set to open in August.

According to Kjolhede, the chain will use the intervening months to evaluate the kitchen’s performance. “We’ll have some time if we need to adjust anything, but we’re really hopeful,” she says.

Not surprisingly, the dining area has seen some adjustments since its introduction last year. One of the new features of the new store is a soda machine that allows diners to choose from 200-plus drink and flavor combinations. With that machine in place, Pei Wei initially removed brewed iced tea from the menu. The chain got enough requests from customers, though, that it brought back its traditionally brewed tea.

The first stores also had two additional monitors (for a total of six) placed in the line of sight of seated customers. Dover planned to use the monitors to drive home brand messages. Diners indicated that they didn’t want the distraction while they were enjoying their meal, so the additional monitors were removed.

Also removed were ceiling panels covered in a burlap-like fabric. While they matched the look and feel of the new design, guests simply didn’t notice them, says Dover.

“There was some cost learning early on [about] what the guests give us credit for and what they don’t. We didn’t want to unnecessarily spend money on things.”

While there may be some changes around the edges, Pei Wei is now committed to making this new look the model for all future store builds. By the end of the year, about 40 locations should follow the new design (including several refurbished units). Another 20 new stores will be opened in 2017.

With a design that stresses freshness and customizability, the chain’s leadership believes it will now get credit for efforts that resonate most with today’s restaurant customers.

“The things that appeal to our guests are the sights and the sounds of the wok. We wanted to showcase that. We wanted to accentuate some of the fresh product that is in our restaurant. So . . . we’ve created a more open restaurant with more color, with more exposure and less of an enclosed kitchen area,” says Dover.