Danville, Pa.-based Geisinger Medical Center provides healthcare services to more than 2 million residents in central and northeast Pennsylvania, as it has for the past 100 years. In January 2013, Geisinger Medical Center debuted the first portion of a two-phase improvement project to give foodservice a much-needed boost. The 350-seat Atrium Café, located on the campus’s Hospital for Advanced Medicine, replaced 3 operations. The scatter-system servery features stations for pizza, entrées, grill items, salads and sushi. A convenience store also operates within the servery. Since its opening, participation on the 8,000-employee campus increased 35 percent. 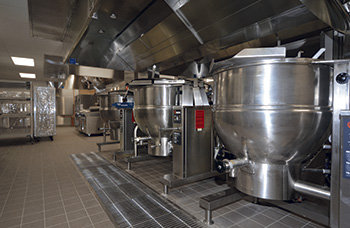 “The second phase of the foodservice project finalizes a commitment made by Geisinger leadership in 2011 when it released the capital dollars for Phase 1,” says Bruce Thomas, MBA, vice president of Guest Services for Geisinger Medical Center.

The antiquated kitchen sat two floors up on the west end of the campus with a small servery. In Phase 1, designers created a large servery and room service kitchen in the newest hospital building on the east end of campus. For over two years staff had to transport food across campus, either outside in a vehicle or inside through the corridors and elevators, a 10-minute trip each time. Phase 2 added the bulk production kitchen to the room service kitchen.

After food arrives at the loading dock, the vendors’ delivery persons transport it along a large hallway into the dry storage area, coolers and a freezer. The refrigerated storage area can hold a large number of pallets. 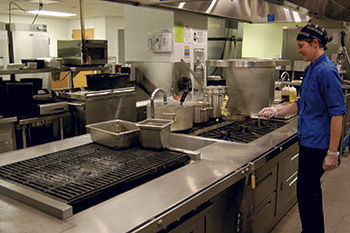 The room service kitchen allows staff to prepare patient meals to order. Photograph courtesy of Joe Mentrikoski“The enlarged cooler space allows us to keep refrigerated and frozen pallets inside and in cold storage until all product is put away in its proper place,” Cerullo says. “The flow has product coming from the dock and circulating from the rear of the production kitchen to storage, moving forward to be prepped, cooled and finally moved out to finishing kitchens, catered events or retail operations.

“Foodservice reduced the amount of travel needed to transport product from the production kitchen to the finishing kitchen,” Cerullo adds. “The departments were kept closer together, thus reducing the travel distance that employees have to walk.”

When necessary, staff go to the storerooms, coolers or freezers and bring food back to their stations based on their daily menu needs. “This main ingredient preparation area is temperature controlled so all cold items can be prepared within a monitored, chilled environment,” says Rick Palmer, vice president of healthcare design for Inman Foodservices Group.

Wire shelving, mobile rack stands, worktables, preparation tables with sinks and other items support production in these areas and throughout the kitchen. In the ingredient prep room, staff prepare mise en place using a scale, a vertical cutter mixer, can opener and mobile pan racks. For preparing meat, staff use a mobile meat lug and meat tenderizer. Also nearby, staff prepare ingredients with a 20-quart mixer and food processor. They place number 10 cans in a crusher to prepare them for recycling.

Designers selected equipment for the hot prep areas to accommodate production of a large variety of menu items for patient room service, and a large volume of retail and catering production. In one preparation area, staff use six-burner ranges with convection ovens beneath, two double steamers and a charbroiler. Equipment in a nearby area includes another food processor, a can opener and tables for additional preparation. 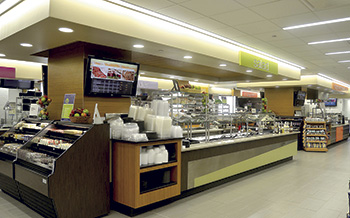 Phase 1’s Atrium Café replaces the other retail operations. Photograph courtesy of Inman Foodservices GroupIn the bulk production area, staff use a pair of 40-gallon tilt skillets, 3 double combi ovens, 2 dual 20-gallon trunnion kettles, a pair of 80-gallon tilt kettles and a 60-gallon tilt kettle. After cooking in 12-inch by 20-inch pans, staff blast chill the food products in their original containers. Staff then place the food items into the -10 degrees F food cooler for future use. “The utilization of an assortment of combi ovens, steamers and other equipment allows for a wide variety of products to be prepared at one time without flavor transfer,” says William “Billy” Inman, president of Inman Foodservices Group.

In the catering area, where demand is growing, staff use a double steamer, 2 double combi ovens, a 40-gallon tilt kettle and a dual trunnion kettle. This cooking lineup contains a 6-burner range, griddle and charbroiler.

The facility also features an expo kitchen, which Geisinger uses for staff education, its version of a farmers’ market and a cooking demonstration area, all of which can be videotaped and posted on Geisinger’s internal website. The expo kitchen contains an island counter for preparation and finishing as well as a combi oven for cooking larger portions. 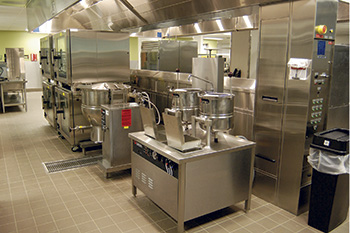 A separate catering production line features trunnion kettles, a tilt kettle and combi ovens. Photograph courtesy of Joe MentrikoskiAdjacent to the training kitchen within the main kitchen sits the double-sided island room service cooking suite, which was completed in January 2013 as part of Phase 1. “Highlights include combi ovens, flash-bake ovens, panini makers, a charbroiler, six-burner range, a griddle, overhead broilers and undercounter refrigeration, all accessible from both sides,” Palmer says.

“Cooking suites are great in a healthcare setting because they have pilot light safety features,” Cerullo says. 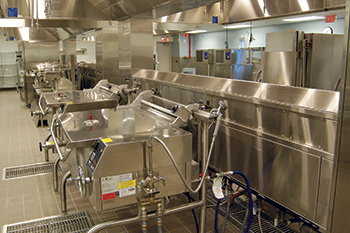 On the main kitchen line, tilting skillets, trunnion kettles and combi ovens are among the equipment supporting production. Photograph courtesy of Joe MentrikoskiCerullo and foodservice designers paid close attention to sustainable and energy-saving features on equipment such as the exhaust hoods, which reduce the exhaust airflow rates required and improve the capture and containment efficiency of the hood. “The hood and use of ultraviolet lights reduce energy usage and eliminate grease buildup,” says Cerullo.

When asked to describe the new kitchen, Thomas said, “It’s gorgeous! It makes me wish I was a foodservice director like in the old days and maybe even go back to my roots as a chef. From design through startup, I consider the project a huge success story and a testament to the perseverance of the foodservice team. Promises were made for a new kitchen as far back as 1985.”

As each day passes since the kitchen’s opening, staff become accustomed to the new space and the new capabilities of the equipment. This kitchen is setting higher levels of excellence within the entire healthcare foodservice industry.