Sous vide (soo-veed), French for "under vacuum," is a cooking technique that vacuum seals food in a specially designed pouch and slow cooks it in water at precise temperatures. 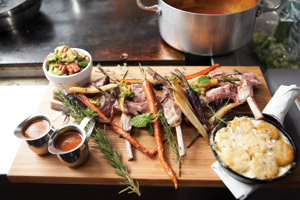 Developed in the late 18th century, the cooking technique was rediscovered by French engineers in the mid-1960s and popularized even further in 1971 by Dr. Bruno Goussault, now chief scientist at Cuisine Solutions, a sous vide equipment and food supplier. Long-revered as a food preparation and preservation method in Europe, sous vide has grown in popularity in the United States because of its consistency and hands-off approach. Sous vide cooking also helps maintain the nutritional integrity and safety of food. 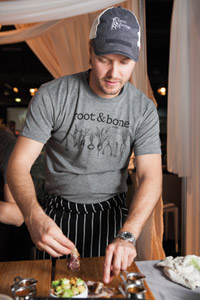 Jeff McInnis from Root & BoneAt his recently opened New York City restaurant, Chef Jeff McInnis relies on his sous vide equipment to reduce fire-to-pickup times and delicately cook meats and vegetables including lamb rack and loin; thick-cut pork chops and steaks; artichokes with white wine, butter and fresh thyme; and even whole heads of cauliflower. The two-step vacuum-sealing and water bath process can be set to specific temperatures so steaks come out perfectly medium-rare without any overcooked edges.