Set aside common perceptions of steakhouses as clubby, stuffy, traditional, male-oriented environs where big, beefy cuts of meat and big red wines dominate. STK is a different animal all together.

STK’s sleak and sexy design features curved black platform seats and a palette of black gloss and cream. A large central lounge area features creamy leather banquettes and textured crocodile tiles.Launched in New York in 2004 by The ONE Group, STK turns the traditional steakhouse concept on its head. "We took out the business chatter and the tie and put the girl and the music in. We changed the whole vibe," says CEO and founder Jonathan Segal. His hospitality development firm in October merged with Committed Capital Acquisition Corp. to become a publicly traded company with plans to grow the STK brand internationally.

STK's menu honors steakhouse traditions but isn't bound by them. The food — like the furnishings, music, lighting, presentation, cocktails and lounge scene — is strategically designed to appeal to women. All steaks come in small, medium and large sizes, and the menu also includes a wide selection of seafood and other meats, creative salads and appetizers. "We do adaptations of traditional steakhouse fare; for example, instead of crab cakes we'll have crab salad with grapefruit, melon and hearts of palm," Segal says. "Steak makes up 55 percent to 60 percent of our sales mix." 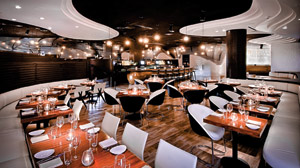 Averaging 10,000 square feet, the STK prototype features curved black platform seats and a palette of black gloss and cream. A large central lounge area features creamy leather banquettes and textured crocodile tiles and is surrounded by an elevated area for more formal dining. Theatrical lights illuminate each table, and a DJ creates an energetic vibe throughout the space. "There's no formal separation between lounge and dining," Segal notes. "We build restaurants around bars and provide multiple ways to dine — in the lounge, at the bar, in a bistro area, in a banquette area. The atmosphere is exciting and sexy, and when people are done eating they stay and listen to music and make a night of it."

The ONE Group operates seven STK units in the U.S. and one in London. A Washington, D.C., unit is set to open in early 2014, and Segal says the company plans to open 18 to 20 units domestically and up to 50 worldwide. The company is also finalizing an "under brand," which he describes as having the same DNA as STK but with a smaller footprint and a slightly lower price point. "We feel it has potential to go into many more cities," he says, "whereas we'll limit STK's exposure to ensure that it maintains its unique vibe."