Fuzzy’s Taco Shop Has a Clear Path to Growth

With a distinctive flavor profile, kick-your-shoes-off atmosphere and strong devotion to cold beer, this Fort Worth, Texas-based chain has grown from just 3 company-owned units in 2009 to 68 locations and counting today. 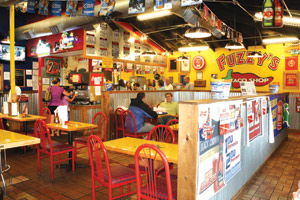 The front of house at Fuzzy’s Taco Shop promotes a fun and comfortable atmosphere for customers throughout the day.Everyone in the foodservice industry knows that a new restaurant faces an uphill climb to survive — and a failing restaurant, an even steeper climb.

So a pair of foodservice veterans, the father-and-son team of Alan and Chuck Bush, understood what they were getting into when they bought a struggling taco shop just off the campus of Texas Christian University in Fort Worth, Texas, in 2003.

The pair defied the odds. Within a year, they built a loyal customer base for Fuzzy's Taco Shop and reversed the restaurant's financial fortunes. Four years later, Alan and Chuck opened the second location in Fort Worth and then a third in Denton, Texas, just a few blocks away from another school, the University of North Texas.

At that point, says Paul Rickels, vice president of franchising for Fuzzy's, the restaurant was receiving regular inquiries about selling franchised units. In 2009, the chain took the plunge, opening its first franchised store. In the four years since, an additional 59 franchised units have opened their doors. Combined with the now 8 corporate-owned stores, Fuzzy's has grown to 68 locations today, and counting.

How does Fuzzy's explain the chain's growth during an economic downturn in the already crowded Mexican-inspired fast-casual niche? According to Rickels, the concept's rapid rise is tied to an approach he laughingly describes as the "reverse mullet." "We're a party in the front of the house and business in the back," he says. "We have systems in place to make sure the food is consistent and the quality is great. We don't give [franchisees] a lot of back-of-the-house flexibility, but in the front, we give them a lot of flexibility in how they fit out their stores and what they look like."

Party in the Front

While the look of Fuzzy's can change from one unit to the next, they all share some elements: benches, chairs and tables in primary colors; pictures and other decorations that reflect the local community and each franchisee's personality; galvanized metal along the queuing line walls, where local business can advertise for free; and wall-mounted televisions typically tuned to sports.

Each store also features more distinctive elements that give Fuzzy's a somewhat edgy feel, contributing to the "party in the front" atmosphere. The chain encourages employees to interact freely with customers and even engage in a playful back-and-forth. As a callout to the concept's signature fish tacos, a 10- to 15-foot shark-like sculpture painted with flames — think of a '57 Chevy — hangs from either the wall or ceiling and serves as the centerpiece of all Fuzzy's stores. In the same vein, dining tables feature an image of a green fish commanding diners to "Eat me!"

These bits of irreverence keep with the chain's desire to create a fun, relaxed atmosphere. "We're not literally telling customers they can take their shoes off, but we want them to let their hair down and have a good time in our store. We provide them with an engaging group of team members that are there to help them have a good time and we provide them with great-tasting food and good portions at a very, very reasonable price. And we love to serve cold beer," Rickels says.

In addition to beer (and in some locations, liquor), Fuzzy's offers a menu that is distinctive both in how broad it is and in the flavors it features. While many concepts in the fast-casual Mexican niche focus on a single menu item, such as burritos, Fuzzy's has many more offerings, including tacos, grilled sandwiches, fajitas and enchiladas. According to James Davis, Fuzzy's vice president of operations, the chain prepares its dishes Baja style. Fuzzy's seasons nearly everything the chain serves with two proprietary mixes to give the menu a distinctive flavor. Other signature flavors are imparted by the feta cheese and cilantro that top every taco Fuzzy's serves.

Such a flexible menu, notes Davis, also enables Fuzzy's to offer items at a wider range of price points than those found in a typical fast-casual operation. The target price for a Fuzzy's shredded beef taco is just $1.99, while dinner platters, including sides, have a target price of up to $7.99.

Another distinguishing characteristic of the chain's menu is that, while most fast-casual restaurants skip the morning, Fuzzy's serves breakfast. As expansive as the dinner offerings, the breakfast menu includes tacos and burritos filled with eggs, chorizo, shrimp and bacon, as well as entrées like migas (a scrambled egg and tortilla dish seasoned with pico de gallo) and chilaquiles (scrambled eggs and shredded chicken or beef on a bed of tortilla strips).

With breakfast on the menu, most Fuzzy's locations open their doors at 7 a.m., although the chain serves these dishes beyond the morning daypart. Originally, Fuzzy's took the standard approach of stopping breakfast service as lunchtime neared, but the chain found demand so high that it now offers these items all day, every day. "Somebody can come into one of our stores and order a breakfast plate, a shrimp taco and two sides. Nobody in the industry offers that," says Rickels.

And breakfast isn't the only thing Fuzzy's serves all day. Depending on local regulations, the chain will pop open a bottle of beer for its customers at any time, from opening at 7 a.m. to closing at midnight or later. This approach, explains Rickels, helps build a customer base among people with nonstandard work hours. "When stores are close to downtown areas, we get a large number of nurses and doctors coming in early in the morning. They're just coming off a 12- or 14-hour hospital shift, and they love the fact that they can come into Fuzzy's and get breakfast or dinner at 7:30 in the morning and even get a cold beer or margarita, depending on local rules. We don't make them feel strange about it. That creates another type of raving fan."

Another key customer base for Fuzzy's: college students. With its focus on fun and value, it is no accident that Fuzzy's first and third shops were located within easy walking distance of university campuses. In fact, the chain's preferred expansion method is to open stores near colleges and universities, areas that feature lots of people with high spirits but limited budgets.

Not so coincidentally, opening up stores near colleges also helps the chain plant small seeds of demand in markets it has not yet entered, notes Rickels. "We get calls all the time from people that started out at TCU and now live in Florida or Ohio and want to know when Fuzzy's is coming to their town. Strategically, it's developing that raving fan. As they graduate and spread out through the United States, they
create some desire for the brand."