Mix together some television exposure, savvy marketing and a low-overhead business model and you have Smallcakes' recipe for making a name for itself in the thriving cupcake niche. 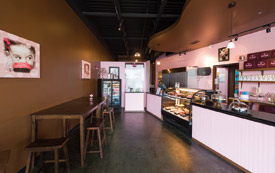 Jeff Martin was never that in to baking. A 1998 graduate of Johnson & Wales University's South Carolina campus, he was following a more mainstream route in the foodservice industry, working as a chef with the goal of one day owning his own concept.

On his regular trips from his home in suburban Kansas City, Mo., to visit family in Atlanta, however, Martin and his wife always made a point to stop by a nearby cupcake shop, and the experience stuck with him. "The cupcakes weren't that great, but the store was always busy," he said. "It was just a cool concept. So one time when we went back home, I started playing around with different recipes."

Out of that "playing around" came the 2008 founding of Smallcakes, an emerging force in the now booming cupcake-centric bakery segment. In the four years since its founding, Smallcakes has grown to 10 stand-alone units (8 franchised and 2 company-owned) and roughly 15 additional locations established through an unusual co-branding partnership with FreshBerry Frozen Yogurt Café. Plans are in place to grow the concept by an additional 15 stand-alone units by the close of 2014.

One of the keys to Smallcakes' growth — almost all of which has occurred in the past two years — has been publicity, the level of which most entrepreneurs could only dream about.

In 2010, when Smallcakes consisted of just two corporate- owned locations, Martin was invited to be a contestant on the first season of the Food Network show "Cupcake Wars," where bakers compete to produce the best cupcakes while adhering to a particular theme. Working within a time constraint, Martin forgot the pumpkin in a pumpkin cardamom cupcake. Though the one of the judges called the cupcake "the best cardamom anything" he had ever tasted, the mistake led to Martin's elimination in the first round.

After seeing his appearance on "Cupcake Wars," Whoopi Goldberg invited him to appear on a special cupcake-themed episode of her daytime talk show "The View," with Martin essentially representing the flyover states among cupcake makers from the East and West Coasts. After those appearances, the concept took off. "After "Cupcake Wars," things were great. After "The View," things were awesome. We started getting calls from all over the place," says Martin.

Smallcakes became one of, if not the, go-to cupcake shops for high-profile events in the Kansas City area and beyond. For example, the chain was invited to serve cupcakes at the 2011 MTV Video Music Awards, held in Los Angeles, and provided cupcakes for official events surrounding the Major League Baseball All-Star Game held in Kansas City this past summer.

To help keep a high profile among its customers, the chain now maintains an active social media presence. It uses its Facebook page to put the word out on giveaways ("First 10 people at any KC location to say 'lunch time equals a cupcake' will get a FREE cupcake.") and fun, lighthearted events like Monday night "Happy Hour," where patrons receive a free plastic shot glass of cupcake frosting.

A restaurant concept can't succeed on good press and savvy marketing alone, though. The cupcake market is booming, and booming equals competition. Martin, therefore, takes pains to set his concept apart. On the most basic level, one of the distinguishing characteristics of Smallcakes' cupcakes is size. The chain uses jumbo-sized cupcake liners, allowing it to offer more treat for the buck than many of its competitors.

Variety and selection are also hallmarks of Smallcakes. Staff arrive at each location at around 5:00 a.m. to bake the 15 to 20 different cupcake flavors offered daily. Baking continues as needed throughout the day, with 1,000 to 1,500 cupcakes produced on a typical day. The chain donates any leftovers to local charities such as homeless shelters or the local Ronald McDonald House, Martin adds.

The look and feel of each Smallcakes unit matches the lighthearted and friendly vibe that defines the brand. To match popular cupcake colors, the stores are painted in pinks and browns, and each features a large photo of Martin's daughter (whose nickname the chain now bears) at age one eating a cupcake.