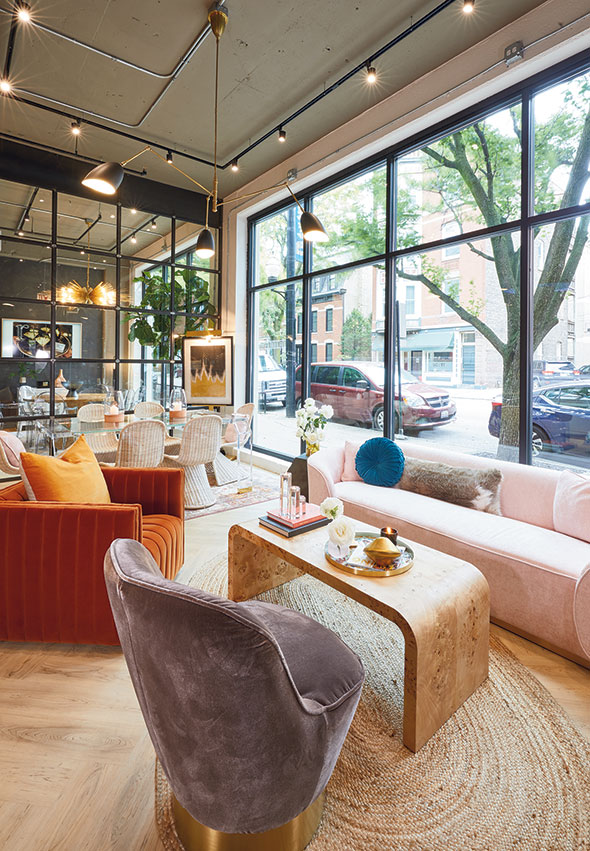 Limelight Catering in Chicago’s Lincoln Park neighborhood needed a refresh to enhance the way it serves food produced in its commissary kitchen.

Limelight Catering opened 30 years ago and was acquired by The Revel Group in 2015. The business provides food and services for catered events ranging from prepackaged lunches for 10 guests in an office building to corporate celebrations at Chicago locations with 10,000 guests. Since its acquisition, Limelight Catering has seen its revenues grow significantly. 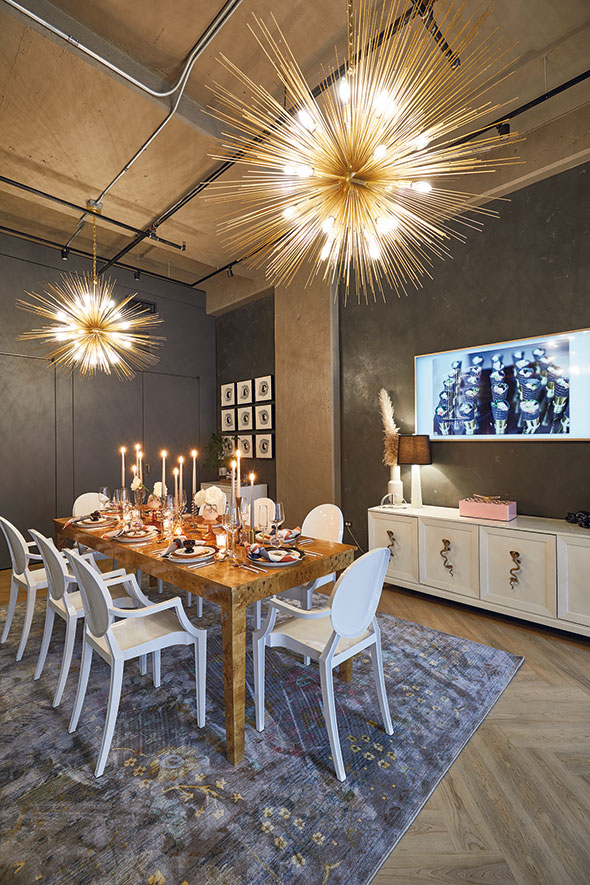 Photos courtesy of The Revel GroupPhase two included a renovation of the adjacent commissary kitchen. It started in February 2020 when the commissary moved temporarily to a site in Chicago’s Fulton Market neighborhood. It was slated for completion in August 2020, but due to the COVID-19 pandemic, Limelight will complete the renovation later; exactly when has yet to be determined.

For phase one, the design team took more than 500 square feet of office space previously housing the culinary and production team and relocated it elsewhere in the building. Prior to the renovation, the culinary team prepared food for the tastings in a small space in the commissary kitchen, but clients didn’t watch food preparation and plating; now, guests see the action in the show kitchen. The additional space also allowed The Revel Group to add two restrooms compliant with the American Disabilities Act, plus a butler’s pantry.

“With the addition of the 500 square feet, the total 2,500-square-foot space was reimagined and redesigned for better utilization,” says Sarah Banasiak, chief creative officer, The Revel Group. “We enhanced the taste-testing experience by adding a show kitchen to give clients an experiential opportunity to interact with the culinary team and watch the chefs in action as they prepare the tastings. We also renovated the tasting rooms and added a reception area.”

In addition to upgrading clients’ tasting experiences, the new space allows Limelight to host intimate events for up to 50 people in a reception-style format. A Limelight event specialist books these events at prices that vary based on event details and guest count. “The space is available first for our tasting clients and then offered to those looking to book externally,” Banasiak says.

The project team went with an aesthetic that perhaps is best described as Parisian-meets-industrial design with a touch of ’70s glamour and ’90s hip-hop. Cement, iron and burl wood pieces ground the design elements. “The high-end residential feel was achieved through the selection of thoughtful furniture and finishes,” Banasiak says. Steel and glass items help create multiple dining spaces that can convert to private dining areas while still allowing light to filter throughout the space.

Food Preparation in the Commissary Kitchen

The main commissary kitchen serves as the preparation and assembly site for both on-site taste-testing and events, as well as for off-site catered events.

After food arrives at a loading dock door at the Fulton Market location, culinary team members check it in and other members transport it to storage, including four main coolers for meat, fish, dairy and produce; two walk-in freezers; and dry storage. “Dry storage is more extensive than in many kitchens because we store savory menu items here and the pastry department’s ingredients and supplies,” says Tony Quartaro, executive chef and culinary arts lead instructor. He joined Limelight two years ago after working in award-winning restaurants such as Formento’s in Chicago, Fedora in New York City, and Nopa and A16 in San Francisco.

Approximately 55 cooks work during the day and 15 cooks at night to prepare menu items. The daytime cooks use slicers, high-speed blenders, immersion blenders and handheld mixers with multiple attachments to prepare most of the bulk prep for garde-manger, including salads, cold sauces, antipasto, deli meats and charcuterie. Pasta is a specialty of the chef.

Staff use a combi oven for cooking proteins, vegetables and hard-boiled eggs. “We use the combi oven for regular cooking and as part of our sous vide cooking,” Quartaro says. “For example, we vacuum-pack short ribs that we’ve seared and marinated in mirepoix, aromatics and a red wine reduction to maximize flavor. We place the packaged ribs into the combi, which gives us a full steam environment that replicates a sous vide immersion bath. So, we can cook about 200 short ribs for about 8 to 12 hours overnight.”

Staff place the short ribs into large containers and into ice baths for about 25 minutes. Usually, staff remove the ribs from the bags, strain the liquid for au jus, label the bags, and transport them to designated storage units and eventually various events. “Using this sous vide process is great and is the first time I’ve been able to apply it to large quantities of food,” Quartaro says. The facility has a HACCP plan to allow the kitchen’s vacuum packaging and sous vide.

After cooking, staff roast or broil certain sous vide-prepared foods to get a crispy skin. “The beautiful thing about working in a kitchen is we’re always looking for ways to improve,” Quartaro says. “Whatever we decide to change or alter can be done right away. Other industries take a while to make changes. The combi and sous vide cooking has changed the way we think about food and improved the quality and consistency.”

The kitchen contains a three-compartment sink for pot washing and an all-solid, low-temp Energy Star-rated dishwasher to clean supplies and sheet trays.

After preparation, staff transport menu items in various stages of completion in designated trucks to catering sites. For on-site events, staff may simply assemble menu items and distribute them or cook them before plating and serving. Mise en place items and menu ingredients are also transferred to the tasting kitchen.

When menu ingredients arrive at the taste-testing kitchen, culinary staff store them in two reach-in refrigerators. The quantity of ingredients varies by the size of the client’s event. “We’ve spoken to clients about their menu preferences before they arrive,” Quartaro says. “We may present 8 to 12 hors d’oeuvres, 2 or 3 proteins, and vegetable entrees, salads and desserts. And we always speak to them about allergens to avoid or substitutions we can make.”

When hosting a tasting, culinary staff consist of one chef who prepares hot food and one who handles cold food and desserts. “Depending on the complexity of the menu, we may have an expediter to make sure everything looks right,” Quartaro says. Sous chef Ramiro Fragoso takes the lead for tastings. Staff prepare a smaller quantity of food for the tastings, which typically include groups of 12 or less. 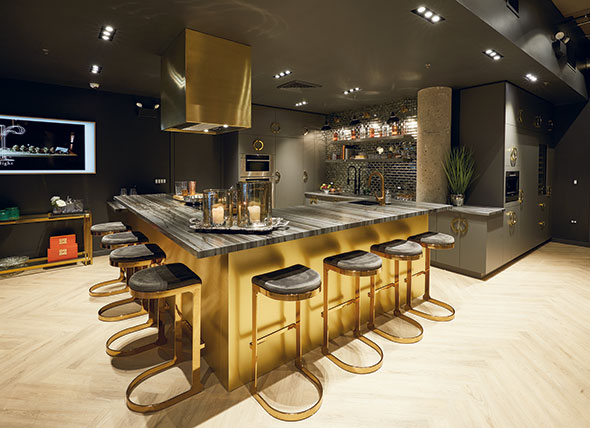 The glamorous kitchen meets the bar. Designers used finishes that feel residential but still withstand the wear and tear of daily use.

Staff prepare tasting menus by using residential foodservice equipment. “The preexisting space, housed in an office building, prevented the team from making structural changes such as installing commercial hoods and gas cooking equipment,” Banasiak says. “Through the use of high-end residential appliances, we didn’t need gas lines or black iron, which is needed for exhausting industrial/professional kitchen stoves and other equipment.”

Culinary staff use a five-burner induction range, two convection ovens, one steam convection oven and a warming drawer with a temperature range of 80 degrees F to 200 degrees F. A custom brass-wrapped hood sits above the appliances, providing both ventilation and a design feature.

The kitchen also contains a stand mixer, another stand mixer specifically for liquid nitrogen ice cream, immersion blenders and a circulator for sous vide. The kitchen and bar area include a 30-inch wine cooler with refrigeration and freezer drawers beneath as well as a built-in espresso maker/coffee system.

An undercounter, near-silent dishwasher with LED lights sits below a counter. “We can wash a few dishes and service utensils in the show kitchen space, but most dishwashing takes place in the commissary kitchen,” Quartaro says.

The culinary team serves tasting menu items to clients either at the kitchen counter or in a more formal private dining room.

The decision to enhance the space continues to pay dividends. “We receive rave reviews from clientele and have an increase in close rates following tastings,” Banasiak says. “Events at the space also bring in revenue.”