Micro marts expand employees' foodservice options throughout the day and night at Hallmark's headquarters and production and distribution facilities. A renovation at the Lawrence facility also features a micro mart. 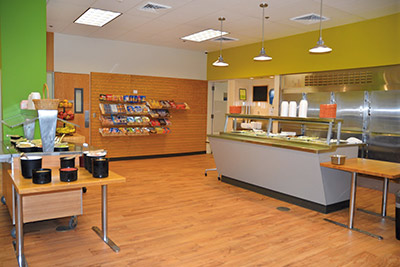 The Lawrence servery’s new floors, lighting and laminated serving counters freshen the servery and invite easy access to menu items.In 1910, 18-year-old Joyce Clyde Hall stepped off a train in Kansas City, Mo., with very little money and two shoeboxes of postcards under his arm. He sold the picture postcards and was soon joined by his brother, Rollie Hall. Together, they formed a company named Hall Brothers. When a fire destroyed their office and inventory in January 1915, the brothers salvaged only their safe and started anew with a $17,000 debt. As postcard sales began to decline because people wanted more privacy in their communication, the brothers started selling high-quality Valentine and Christmas cards mailed in envelopes. They purchased printing presses and began producing their own greeting cards later that year.

This simple business that started out of a shoebox today generates more than $3.8 billion in annual revenues from the sales of greeting cards and other products sold in more than 30,000 retail stores across the U.S. and online. Hallmark remains under the private ownership of the Hall family. The brand also extends to cable television's Hallmark Channels and Hallmark Hall of Fame movies. Hallmark also owns subsidiaries, including Crayola.

The award-winning Crown Room foodservice has long been a highly regarded employee benefit not only at the Kansas City headquarters but also at the company's production and distribution facilities in other cities. As building and plant populations fluctuated and decreased, Hallmark's executives were challenged to provide quality foodservice at a reasonable cost. "We wanted to update the way in which we approached foodservices, particularly for off-shifts and weekends in plants," says Sally Luck, HR director, Corporate Services and Wellness. "We wanted to provide healthier selections no matter what time of day or week they are offered and also to reduce labor costs."

For example, at the headquarters facility in Kansas City, the late night and weekend labor force may total 50. At Leavenworth, as at all the plant locations, three shifts remain necessary, but plant population here totals only 240 people. In addition, at various plant locations, some employees need to work weekends when foodservice options are very limited if at all available. 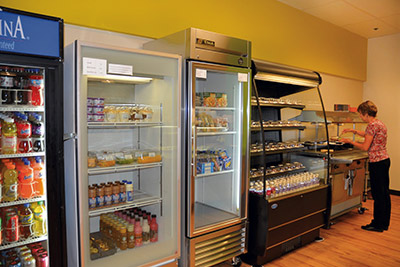 Ann Scott checks food quality at the sandwich station in Lawrence. To her left, refrigerated cases hold packaged menu items and beverages.Micro marts became the solution adopted by Luck, foodservice director Christine Rankin and foodservice unit managers Geoff Gorman, Ann Scott, Laura Battle and Bill Grant. These self-service areas expand employees' foodservice options throughout the day and night at headquarters in Kansas City, and production and distribution facilities in the Kansas locations in Lawrence, Leavenworth and Liberty. Employees can purchase fresh, healthy foods all day, every day without the labor costs for a full-service operation.

At all locations, vending machines that reside in the employee lounges remain in operation.

At Kansas City, Lawrence and Liberty, staff prepare and package on-site the micro mart menu items. For Leavenworth, the Kansas City headquarters kitchen provides blast-chilled (a new blast chiller was purchased), packaged menu items for the micro mart. Regular couriers transport the foods from headquarters to the plants. "The population here has been declining over time, so it doesn't make sense to prepare and serve hot food," Luck says. "We can provide much healthier food and offer more variety with this system." Employees heat up cold food in microwaves.

Each micro mart contains a wall with snack containers, an open-air curtain display case, a closed-door refrigerator for beverages and other foods, a freezer and a beverage island station.

"Micro marts are effective because they require less labor than in a servery," Luck says. 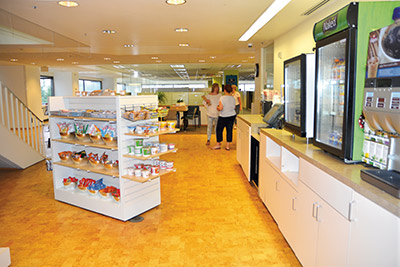 "If customers have problems with payment at the micro marts and no one from foodservice is working, people working at the plants can help," Luck adds. "We've had very few problems."

The plant's management decided the Lawrence facility, including the servery, was in need of updated infrastructure. "We in foodservice wanted to be involved because we wanted to update the servery as well as add a micro mart to provide food 24-7 on weekdays and weekends," Luck says. "We also wanted to make menu changes to provide more types of fresh food people wanted to eat."

"The Lawrence customers' opinions and values were heard and understood and then transformed and presented in a green, healthy physical environment where food in the space is celebrated," says Alvin Williams, Crown Center project architect, Hallmark Cards project design team.

Before the renovation, the Lawrence servery featured a typical 1960s design with a lot of bulky stainless steel and outdated laminate. Designers opened up the floor plan to improve circulation and aesthetics. They retained existing, reliable, sturdy equipment while removing old equipment no longer needed. The team re-faced the existing salad bar and hot foodservice line with an upgraded, upscale laminate. The salad bar contains crocks that sit on gel to keep them cold. 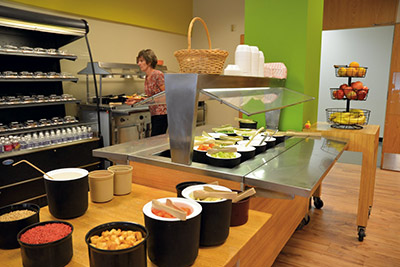 The micro mart is fully integrated into the servery. Coolers, racks of snacks and the beverage station service the off-hours customers.

In the servery, designers increased the artificial light level by including new pendant lights that highlight hot food serving areas. In the dining space, "the internal light became an extension to the natural light that flooded in through the floor-to-ceiling windows surrounding the dining space," Williams says. The light called attention to the aesthetics of the new color scheme. Carpet tile provides a contemporary look to the space and is easy to clean. "You can pick up the tiles and clean them under a faucet," says Ann Scott, unit manager of Lawrence and Leavenworth foodservices. 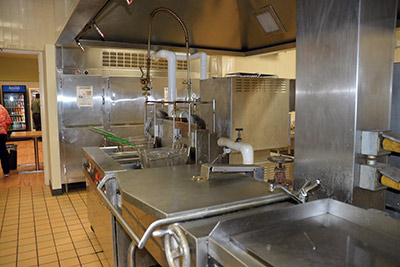 In Lawrence, a flattop griddle, tilt skillet, fryers and pass-through refrigerated units and ovens support back-of-house production.Staff store food in a walk-in cooler, walk-in freezer and dry storage. During prep, they hold ingredients in a pass-through cooler and pass-through warmers. For preparing meals, staff use a double-stacked convection oven set, single convection oven, tilt skillet, a new flat top grill, a set of 45-pound, deep-fat fryers, a 2-compartment steamer and 5-gallon kettle. Menu items include hot foods such as chicken and fish entrées, Italian and Mexican cuisine, and a variety of hot sandwiches, a salad bar with deli meats and vegetables, a make-your-own sandwich bar, and desserts.

The only menu items staff do not prepare here are desserts. "We order these from the Kansas City facility and package them ourselves," Scott says. In addition to micro mart items, customers during regular meal services have grab-and-go options that foodservice staff package on-site. "Everything sells within 24 hours during weekdays and within 48 hours on weekends, so nothing is held for long," Scott says.

Since the foodservice transition, Scott has advised her colleagues not to be afraid to try new menu and service options. "Customers have accepted everything we've put out," she says. "But we also listened to customers about their needs."

She also offers a caveat. "Do not underestimate the amount of time to implement bar coding," she says. "It may take months."

The results of installing micro marts in four buildings and renovating the Lawrence facility are positive. Luck reports that labor costs have been reduced, revenues per capita are equal or greater and customer satisfaction is high. "Flexibility to stock up for overtime periods has increased revenues," Luck says. "Healthier options are more available for off-shifts and weekends. Variety is improved. And weekend customer satisfaction is especially high."