A creative approach to serving staff, this multiphase project transformed the main kitchen and employee café into an efficient, contemporary facility without interrupting patient services. 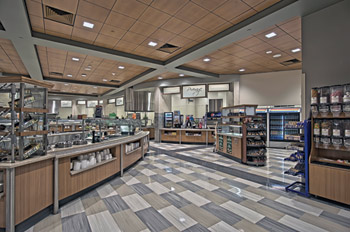 Photo courtesy of King + KingWhen the kitchen and employee cafeteria and dining room at Reading Hospital passed their 50th year in use, it became obvious a change was necessary.

Margaret Kipe, director, nutrition services, contacted foodservice consultant Charnette Norton to assist in developing a plan. "We couldn't continue to operate like we had because the facility had been built in 1953," Kipe says. "We had an aging, high-volume cafeteria serving 1,800 people, and we had 6,000 employees. The cafeteria was not only undersized but it looked tired. The production system looked like a military carrier."

So in 2007 Norton and Kipe developed a five-year plan, complete with blueprints, to renovate the foodservice facilities, which included a room service operation, café, dining room and courtyard. "It was beautiful, but was going to cost $25 million," Norton says.

"To say the least, we were thinking big," Kipe adds.

The plan did not receive funding, and in 2010, a change in hospital administration resulted in the project being put on hold. The consulting group that came in to restructure the administration eventually took over and became the hospital's current leadership. "These consultants took one look at the cafeteria and knew we were in desperate need of a renovation, and encouraged us to go to room service, as we had originally requested," Kipe says. "We knew we couldn't do the grandiose plan, so we started from scratch to reconceive the kitchen and the cafeteria's servery. We also needed a new dishroom."

The new administration asked Kipe and her team to make a presentation to the board of directors. By this time, the foodservice consultants included Norton who reached out to Tim Stafford, principal of Stafford Design Group Inc., and Tad Domek, formerly with Robert Pacifico Associates and now with Foodservice Venues.

"At the end of the presentation, we took the board members through the kitchen. What we intended to be a 15-minute presentation became a 45-minute session with many questions and lots of exploration," Kipe says. The board members saw the outdated kitchen, which featured an inefficient use of space for cold and hot production and a traditional, oval, cantilevered conveyor trayline. The board was also well aware of the outdated servery and dining space.

Soon, Kipe, the architects and the foodservice design consultants developed a $9 million plan the board approved.

"The entire team did a great job working out the phasing and making sure we had as little disruption in regular service as possible," Kipe says.

Built and opened in 2012 during the initial project phase, a kiosk named Counter Clockwise offered employees a basic menu of sandwiches, salads and beverages. Sitting adjacent to the employee cafeteria dining room, prior to construction this outlet was a 480-square-foot area containing 6 vending machines and a storage closet.

Today, Counter Clockwise features an expanded menu of Starbucks brewed coffee, espresso drinks, Frappuccinos and a full line of smoothies. The quick-serve venue includes coffee brewers, air pots and an espresso machine; hot food wells for two daily soups; a sandwich prep table for deli sandwiches; a grab-and-go case for premade salads, sandwiches and desserts; a microwave and quick-heat oven for premade meals to be reheated; as well as storage space for operation, backup refrigeration, and staging for a hot holding cart. Open from 6 a.m. to 4 a.m. daily, this popular area also offers seating for 20 guests.

Also during servery construction, staff set up in a nearby conference room a temporary service area that included hot wells, a salad bar and refrigerated display cases to assist with feeding employees. "We let employees know what was going on throughout the process, so they wouldn't have to guess," says Dennis Brennan, manager of retail operations. "This communication helped enormously to ease anxiety about the service interruption."

The kitchen bakeshop became a hot prep area so staff could prepare food for patient services during the renovation of the original hot prep area. "By using existing facilities, we didn't have to bring in a temporary kitchen trailer, which is very expensive," Stafford says. When the renovation was complete, this production space once again became a bakery. Today, the bakeshop's staff use convection ovens, steam kettles and a steamer to produce baked items for the entire healthcare campus.

"There were many amazing things that worked out perfectly during this renovation," Stafford says. "For example, while the new trayline table was installed, staff was still able to use the existing conveyor. And less than 24 hours before the new trayline went live, the contractor came in and removed the old conveyor. The next morning, trays were coming off the new line."

Another major part of the project was moving the dishroom from the lower level to the main level adjacent to the kitchen. "The dishroom occupies 1,110 square feet, about half of which is due to the building's expansion," says Kristie Mack, project manager at King + King Architects.

The Kitchen with Cold and Hot Prep 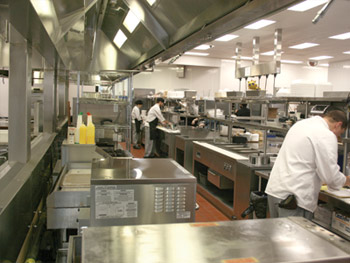 Staff work on the chef’s side of the second room service trayline. Photos courtesy of Reading HealthFood arrives at a ground-level loading dock. Staff transport deliveries to the three walk-in coolers, three freezers and storage areas, which weren't altered during the renovation. Staff use two freight elevators at either end of the storage space to convey stored products to the kitchen. A third elevator carries tray carts to patient floors in the hospital, which connects to the freestanding foodservice building by corridors.

Storeroom personnel deliver food from the ground-level storage areas to the preparation spaces on the first level. The cold prep area contains one large space divided into zones for different functions, including vegetable chopping and preparation of salads and mise en place. Equipment consists of worktables, prep sinks, refrigerators and small appliances. The cold prep area supports the main kitchen's production of salads, mise en place for the hot cookline, special diet prep, as well as grab-and-go operations throughout the sprawling campus. "This area is quite an improvement from the pre-renovated setup that was split among several areas on the ground level and first level of the building," Kipe says.

The pre-renovated hot prep area included most of the bulk cooking equipment and a blast chiller that is still in use, in addition to a potwashing area. "The space was very cramped, and there was minimal workspace," says David Robison, executive chef. "The potwashing function was relocated to the new dishroom."

The cooking line also retained most of the existing equipment including three 60-gallon steam-jacketed kettles and a 40-gallon steam-jacketed kettle for cooking sauces and soups, a 40-gallon tilting braising pan, double-stacked combi ovens for heating proteins, a 60-quart mixer and gas convection oven. "The relocation of the pot-wash area opened up space for improved work area to include new worktables and a broiler on the cookline," Domek says. 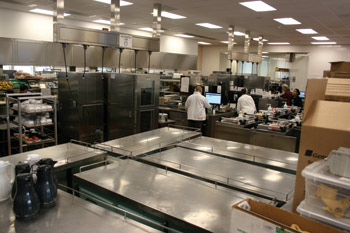 The kitchen and its traylines bring efficiencies to the foodservice production.Similar to ordering food in a hotel room, patients place orders for food from 6:30 a.m. until 6:30 p.m. via telephone with room service specialists located in a call center who insure their dietary needs are met. "The existing trayline was an oval conveyorized system for bulk tray service to the patients," Kipe says. "The cooking line supporting the trayline was set up for bulk cooking."

The line begins at a starter station where a staff member assembles a tray base, utensils and condiments. As the tray moves along, staff members fill it with cold and hot food, which sit in wells and pass-through shelves. The tray turns a corner where staff add a lid and beverages from dispensing equipment. "We specified convertible drawers that allow staff to run them cold or frozen," Stafford says. "So in the morning, the drawers hold milk, and at lunch and dinner they hold frozen ice cream.

"One line runs continuously, while the other runs only during peak periods when many people want their trays," Stafford adds. "This allows staff to work elsewhere in the operation when they aren't working the trayline and supports the cross-training approach used by the department."

At the end of the tray-loading process, expediters give the tray a final quality check and load it onto an eight-tray room service cart that other staff members pick up and deliver to the patient floors. "From time of
order until delivery takes a maximum of 45 minutes," Kipe says. "The trays are delivered by ambassadors who provide a high level of personal service for each patient." After service, soiled trays are held in a room near the elevators and transported to the lower level for washing.

"This service makes every meal an experience for patients," Robison says. "Patients eat better, heal better and feel better sooner. Our role is to help them emotionally as well as nutritionally on their road to recovery."

"We've only been doing this since January, and in 4 months we have saved about $60,000 in food," Kipe says. "This more than offsets the cost of additional employees we need for room service."