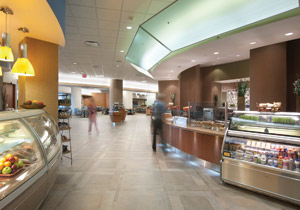 Display cases present Simply to Go foods and reinforce the fresh food served throughout the café. Photos courtesy of HKS ArchitectsBuilt in the 1950s, Parkview Hospital operated for many years in a section of Fort Wayne that was difficult for staff to access. Eventually, however, the board of directors selected a site on the northern side of the city to construct a new, more community-based hospital and medical center — Parkview Regional Medical Center (PRMC). The establishment is part of a not-for-profit, community-based health system, which was formed in 1995 and includes 8 hospitals serving northeast Indiana and northwest Ohio, areas with a population exceeding 820,000. The medical center has 8,500 employees.

The new Parkview Regional Medical Center occupies 1.1 million square feet and includes a 446-bed tower. PRMC, which opened in March 2012, provides more than 40 teams of hospital leadership and staff to care for inpatients — all of whom have their own rooms equipped with "smart" technology — as well as outpatients. A robot system delivers food for the third-shift meal delivery; returns some dirty trays; and sends floor stock to the floors and medicine, linens, supplies and equipment throughout the facility, allowing employees to focus on patients.

"Designed as one visually cohesive campus, the centers of excellence are individually expressed through distinct architectural elements anchored by a common theme," says
Bradley Collard, AIA, LEED AP, associate principal and senior vice president of HKS Architects. "Walking inside, guests transition into an embracing, family-centered environment surrounded by natural materials, soothing colors and timeless design. Daylight is maximized for views and orientation. Way-finding is improved through the use of a single-loaded day-lit concourse. The interior includes onstage and backstage [support services] circulation."

"What makes the hospital and foodservice successful is the connection with and giving back to the community," says Eric Thorne, director of nutrition services for Sodexo, which manages the foodservice operation for PRMC. "This philosophy and mission starts from the president, Sue Ehinger, who walks the talk and passes this sense of purpose to everyone in the hospital."

Among the key features the foodservice staff appreciate is the ample space allotted for preparation and production. "We have multiple areas with enough space to prepare and produce items for the café, room service and catering," says Thorne. "In addition, the equipment allows us to grow if the hospital expands. There is enough firepower, including additional equipment in the catering area, and utility distribution systems set up so we can switch out equipment if needed in the future."

"We spent a lot of time in the old facilities to collect data about the strengths and weaknesses of the foodservices so we could improve on it for the new facility," says Eli Osatinski, president, Systems Design International Inc., the project's foodservice consultant.

"The flow of food delivery, prep and production is very well thought through," Thorne says, explaining that he didn't arrive until June 2012, two and a half months after the foodservice operation opened.

Food arrives at the loading dock on the hospital's ground floor on the west side of the campus. The foundation of the facility slopes upward; so the opening to the kitchen is on the ground floor, and the kitchen sits beneath the PRMC Café.

The café, which will soon get a formal name when PRMC wraps up a contest, sits on the hospital's first floor near the main entrance.

Staff place deliveries into three walk-in coolers, which hold meat, produce and dairy, respectively. Another walk-in cooler holds beverages. A walk-in freezer holds high-end items, and a larger freezer contains food items such as fries, potatoes and desserts. In addition, reach-in prep coolers stand in the ingredient/prep area, patient services/room service area, and the catering prep area. A large walk-in blast chiller in the prep area is also integral to the operation's production. Stationary refrigerators and freezers sit at each work station to support production and allow staff to operate within HACCP guidelines.

"The compressors were remotely located off the third-floor mezzanine, which made refrigeration sizing and routing more complex and required a great deal of coordination between C&T Design and the on-site construction trades," says Randy Truitt, CFSP, of C&T Design and Equipment, the project's equipment dealer.

"Having a lot of storage, from a manager's perspective, is good and challenging," says Michael Morin, operations manager for Sodexo. "The good side is inventory is more efficient because all similar items are in one area, making them easily identifiable. We aren't stuffing things into storage, which results in items getting lost. Also, with this much storage space we don't have multiple people walking in and out. The less convenient side is we must monitor all these areas. Of course, we have electronic monitoring for cleanliness and temperature, which is great for sanitation, but we have to oversee multiple units. From a sanitation perspective, this is a good problem to have."

In the ingredient room/prep area, Morin explains that staff use counters and slicers to prepare potato salad and other composition salads, all mise en place for vegetables used at the retail cooking stations in the café, and ambient-temperature sauces. This area also contains vacuum-sealing equipment to package menu items for catering operations.

In another section of the prep area, staff use slicers for cutting meat. The meat-designated walk-in cooler sits adjacent to the prep area. "This way, food is never out for more than 30 minutes at a time," Thorne says.

To the right of this prep area, staff work the retail production line, using two kettles to make chili and
soups such as garden vegetable, potato bacon and tomato Florentine as well as rice and pasta; and two double-stacked combi ovens steam, bake and roast food items including pot roast, chicken, rice, pastas, vegetables and bread.

"The production area is a straight line, which is very efficient," Osatinski says. "It has the capability of reducing labor because staff don't have to walk into different rooms to complete tasks. Also, the kitchen is open so labor can be shared in different areas." Though this capability exists, Thorne says sharing doesn't occur now because of the volume of production.

Following production, staff place some food items into a walk-in blast chiller. "We might prepare meatloaf for the room service menu and place 50 pounds of this into the blast chiller so we can take out individual portions to reheat and not waste what isn't needed," Thorne says. The blast chiller also cools chili that staff make in large batches. They place half a batch of chili in the blast chiller for use later in the week and half in a refrigerator for use more immediately. Staff also cook chicken breasts a few times a week in the combi ovens, using the grill-marking feature, and hold them in the blast chiller until delivering them to retail units.