A 9,000-square-foot kitchen provides separate zones for banquets, the atrium restaurant, and breakfast and room service in order to maintain labor efficiency and set high standards for food quality and sanitation. 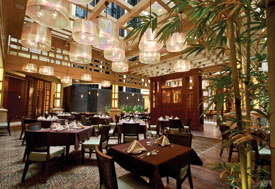 Soon after entering and touring the 11-story Embassy Suites Orlando, Lake Buena Vista South, visitors recognize that this is not a typical Embassy Suites hotel. Located 3.5 miles from Walt Disney World Resort, this 300-suite property advertises that it has more meeting, pre-function and event space than any Embassy Suites hotel in Florida. While a typical Embassy Suites hotel has less than 10,000 square feet of meeting space, this hotel has 40,000 square feet, including 2 ballrooms, 15 flexible breakout rooms, 3 boardrooms and 2 outdoor terraces. In order to serve its guests, the hotel features a 9,000-square-foot kitchen to support a full-service signature restaurant, a lounge bar, complimentary breakfast and reception area, room service and banquets.

"With this property, which is located within two miles of its sister hotels – another Embassy Suites hotel and Caribe Royale – synergies can be developed for sales, marketing and operations," says Dennis Hale, general manager, Embassy Suites Orlando, Lake Buena Vista South.

Central to the hotel's public areas, an 11-story atrium rising 100 feet into the air offers wide sight lines of interior gardens. Following the Craftsman style, the architects and designers incorporated an indoor-outdoor garden space within the atrium using refined millwork. Water cascades down a black stone wall, and a glass bridge connects to the entrance. An architectural trellis encloses the 72-seat Kyngs Grille, the property's fine-dining venue.

Placed at a 45-degree angle to the building, skylights bring in the maximum amount of natural light. "We created an intimate dining environment that feels a part of the energy of the public spaces, but the water wall softens the noise of activity in the atrium," says the project's interior designer, Linda Synder, owner of Linda Snyder Associates.

"The 20-foot-high live bamboo surrounding the trellis enclosing the dining venue provides some intimacy," she continues. "Also helping to create an intimate space are the various forms of lighting, such as glass pendants suspended at different heights to appear as though they are dancing, contrasted against large organza drum shades housing glass globes that lend glamour to the space."

Creating a signature restaurant was a key component in this hotel's development and dates back to the initial days on the drawing board circa 2007 and 2008. But when the economy took a turn for the worse, says Hale, the project was placed on hold. Finally, in 2011, the project resumed, and the facility officially opened Sept. 25, 2012.

"Our foodservice must cover a lot of bases because of the diversity of clientele and the various experiences they desire from a hotel's dining operations," Hale says. "We realize that guests often expect lower food quality in hotels than freestanding restaurants, so we work hard to exceed their expectations."

Adjacent to the restaurant, the Oasis Lounge features a millwork trellis with fabric shades and dark stained wood that complements the atrium. A 15-foot-high back-bar liquor display stands prominently in the space. "The dark wood and bar height gives this area a strong masculine identity," Snyder says.

In contrast, the complimentary breakfast and reception area is more colorful. "This is a highly detailed space that you wouldn't expect in a hotel's breakfast area," Snyder says. "It's not a throwaway space. It is tailored yet whimsical with a high level of finish, offering an energizing venue with strong contrast in color and pattern, as well as impactful lighting to help guests start their day." Playful, large-scale, bell-shaped light fixtures in clusters of three create the whimsy and sense of fun in this area.

The 9,000-square-foot kitchen, which supports all of the hotel's various dining venues, is divided into zones to allow for separate staffing of each area. This also reduces the risk of cross-contamination from one area to another. "Each kitchen area was designed with equipment and electrical

outlets for the current menu and future menus," says the project's foodservice design consultant, Thomas Galvin, FCSI, of Galvin Design Group. "Though the preparation areas are separate and distinctive, the areas integrate with one another so all can support large banquets if necessary."

One of the kitchen's key features is a flow that allows a seamless stream of activity from the areas that hold soiled plates and the space that houses the clean china. "The flow was designed to eliminate cross contamination from the banquet, complimentary breakfast and restaurant kitchen areas," Galvin says. "In order to achieve this high level of sanitation standards, we needed to have seamless flow from the requisition bulk storage area to the three kitchen zones and two bar areas. Cold and dry storage is strategically located next to each zone."

Another practice helping to eliminate cross contamination is the placement of the carts holding dirty dishes from the breakfast area and restaurant. Staff use a direct path to the dishwashing area to transport the dirty dishes from this area, which is near the breakfast space. "The dishroom is positioned at the kitchen's entrance, thereby reducing possibilities of cross contamination," Galvin says. "What's more, a lot of attention was given to strategically placing hand sinks throughout the various areas."

In order to drive production and labor efficiency into the project, water-cooled refrigeration is placed next to each work area, which contributes to labor efficiency by making ingredients more accessible during work periods, thus reducing the number of steps staff must take which helps them to be more productive.

When specifying cooking equipment, consideration was given to those items that help minimize the consumption of gas, water and electricity, thus resulting in lower total cost of ownership for these items. "After the project was re-started, each area's budget was reviewed and slightly increased by the corporate office," Galvin says. "Additional re-specifications used the same electrical requirements but posted better energy savings."