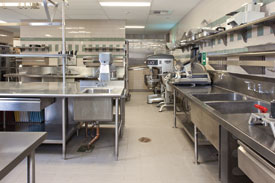 In the cold prep area, a well-arranged space holds prep tables, sinks, a vertical cutter/mixer, a food slicer, a 60-quart floor mixer, a 20-quart tabletop mixer, handheld mixers and slicers, an ice cream maker and a blender. The stainless steel wall behind the floor mixer sits in front of a ramp that leads to the production area for Bear Paw Deli. The wall banks a secondary walk-in refrigerated storage. At left, a tray holder sits beneath the counter. Photograph by Judith Lawrence, JK Lawrence PhotographyOld Faithful Inn, located in Yellowstone National Park in Wyoming, was the first lodge built in the rustic style; construction made use of local materials, providing inspiration for what was later known as "parkitecture." An icon of the national park system, Old Faithful Inn is listed in the National Register of Historic Places. In addition to the inn's huge open-atrium lobby and immense stone fireplace, the deck on the front of the building offers ideal seating for observing periodic eruptions of the famed Old Faithful geyser. This combination makes Old Faithful Inn one of the world's most popular tourist sites.

In response to issues related to its age and the highly seismic area where it is located, Old Faithful Inn underwent a four-phase project to renovate the portion known as the Old House, under the guidance of A&E Architects. The project began in 2004 and concluded in the spring of 2012. The last phase included renovations of the kitchen storage, central kitchen and employee dining servery.

Since the kitchen was last renovated in the mid-1980s and due to the age of the facility, the structure was deteriorating, and inevitably, health code violations were occurring. The modernization project included a central kitchen that sectioned hotline functions from production/preparation areas and incorporated modern cooking and rapid chilling elements to streamline production output; a separate employee dining room with preparation and hotline functions; a renovated employee dining servery, and the positioning of a cart and mop spray room with access to the loading dock and adjacent central warehouse.

As a result of this project, the 6,000-square-foot central kitchen can prepare 3,200 meals a day for all operations, which include the Old Faithful Inn à la carte dining room (1,800 meals a day, including breakfast, lunch and dinner); employee dining room (750 meals daily), in addition to support for the Bear Pit Lounge and Bear Paw Deli, both at the Inn.

"Overall, the project goals were to produce a highly functional and synergistic kitchen," says Michael Miles, principal at H-C Design & Consulting, the project's foodservice design consultant. These goals would allow the park and Xanterra Parks and Resorts, the park's concessionaire, to increase annual revenues from the facility with quicker turn times, increase potential for maintaining food quality, and preserve budgetary guidelines throughout the project. Realizing these goals was made possible, Miles says, "by installing highly efficient equipment and advanced technologies, and integrating monitoring capabilities paired with reliable standard equipment to produce a hybrid kitchen for years of great returns."

The Challenges of Working with a Historic Location

Integrating multiple technological platforms to work seamlessly within a 108-year-old building with structural restrictions (due to its age and the highly active seismic park area) without aesthetically changing the facility's appearance presented an enormous challenge to the project team, which included members from A&E Architects, H-C Design & Consulting, and Xanterra Parks and Resorts. For example, multiple additions to the Inn had been made over the years, creating column lines and flooring elevation changes in many locations. No exterior fans were to be visible on the large roof surface, and as-built drawings and structural columns were in flux when the building interior was demolished.

"One of the main highlights for this project occurred during demolition," says Dennis Johnson, AIA, LEED AP, project architect with A&E Architects. "It was interesting for me to see the curtain come down, so to speak, on the area that the kitchen occupies. We saw all the various ages and incarnations of how the kitchen changed over time from being a separate structure with only a small connection to the then-original configuration of the dining room to the small and large additions that have changed the kitchen and dining room [the Old Faithful Inn's dining room renovation took place in 2005] to what it is today."

"I also felt a sense of accomplishment in integrating a new, modern kitchen into an existing historic building," Johnson says. "Historic buildings are always a challenge because it seems that when a critical dimension is required for a space or piece of equipment, the building fights back by making the space just a touch too small. The design team worked very well in thinking creatively to route equipment and lay out spaces to accomplish the installation of new components into an old space. While this project didn't necessarily have the architectural rigor required when dealing with a very public historic space, nonetheless the historic compatibility was a major driving force for the work."

Another challenge facing the design team was the effort to complete the work in and around the kitchen operation during the summer. "The building season in Yellowstone is unlike most other locations because major construction projects almost exclusively occur during the winter when the buildings are closed and the impact on visitors is reduced," Johnson says. "This causes additional challenges with supplying, heating, and working and living conditions for the staff because over-the-snow travel is the only way in and out from the end of November through early April."

"In fact, no road traffic is allowed during the winter season, so supplies must be transported via snowcats and Bombardiers," says Miles.

The kitchen project's first phase was the storage area. The central warehouse that was located in the basement of the historic inn was moved to a location that had previously served as the laundry building. This facilitated the renovation and allowed construction crews to make structural changes to the historic inn.

"We used to unload trucks by hand," says Mike Dean, CEC executive sous chef, Yellowstone Park Lodges, Xanterra Parks & Resorts. "Now we have a system in which pallets are delivered to the dock and can be wheeled up on a concrete ramp to the elevator. This greatly improved the flow of delivery and stocking."

One key design element was separating defined spaces to create a cohesive atmosphere. For example, Miles says, relocating the scullery and dishwashing to the opposite side of the kitchen allowed for access to grease storage, cart cleaning and the side dock. Designers created a separate entrance for supplies alongside the central refrigeration system and placed basement dry goods storage and elevator access in the main and center corridor with a direct route to the employee dining room and production areas. The dry storage facility stands alone with separate beer and liquor storage. In addition, food and beverage office locations were centralized to enable managers to maintain ongoing oversight of the facility, and the employee dining room function was positioned separately from production so it can operate more efficiently.