A new look and flexible but systematic approach to kitchen design are helping this concept compete in an elevated convenience store market.

Fifty years and 1,200 locations are impressive milestones for any restaurant chain to reach. But not every concept that hits those numbers gets a lot of notice.

Among the brands flying relatively under the radar is Chester’s Chicken, which has about 1,200 locations across the U.S., the Caribbean and Central America. So why isn’t the chain more well-known? In short, its business model makes Chester’s Chicken lower profile and frankly a little less sexy than the chains offering a fast-casual experience or handcrafted menu items.

Founded in Montgomery, Ala., in 1952, this 100% franchised QSR concept utilizes a store-within-a-store business model. All of its locations operate in convenience stores, truck stops, grocery stores and the like. There are no stand-alone locations. From these spots, guests can order bone-in fried chicken, chicken tenders and chicken sandwiches; sides including green beans, macaroni and cheese, and fried chicken gizzards; and fried pies with fillings like apple and strawberry cream cheese.

With a menu designed for eating on the go, either in the car or during a quick stop before getting back on the road, the chain’s offerings are higher quality than the roller grill hot dogs and microwave burritos one expects to find at a stereotypical convenience store, says William Culpepper, vice president of marketing for Chester’s International. “We are using a fresh chicken that is fried fresh in stores every day. It really is an outstanding product that stands apart from some of the other fare you might find at convenience stores, some of the freezer-to-fryer products,” he says. 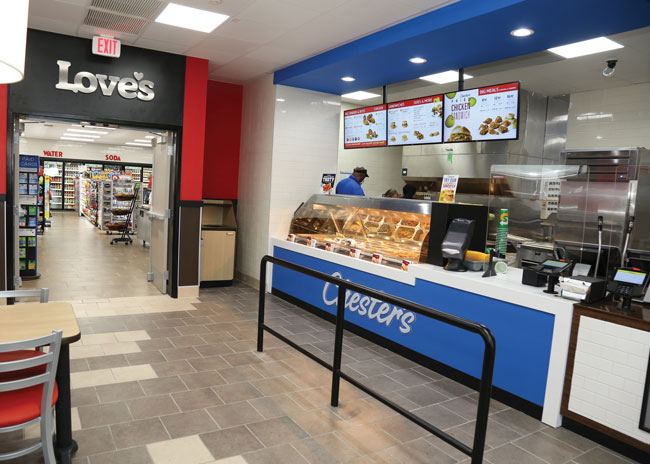 All 1,200 Chester’s locations utilize a store-within-a-store model in places like c-stores, grocery stores and truck stops.

As a c-store and rest stop brand, Chester’s stores put up strong numbers during the pandemic. That makes perfect sense, says Culpepper. Over the past 18 months, and especially during the summer of 2020, people simply didn’t travel much by air. Family vacations and weekend getaways meant road trips, and road trips meant stops at the types of places where Chester’s thrives.

Still, the chain hasn’t been sitting back and counting the receipts. About a year and a half ago, the company began a redesign that impacted its appearance as well as kitchen design standards. The first locations built with the complete redesign package began operating this past summer in Durant, Okla.; Monroe, La.; and Elk Grove Village, Ill.

The reasoning behind the redesign is straightforward. Over the years, people’s expectations for convenience store and truck stop food have raised considerably. C-store brands like Sheetz and Wawa serve deli-quality sandwiches, wings worthy of a sports bar and fully customizable salads. In essence, says Culpepper, many of these concepts “have shifted from a gas station that serves food to a restaurant that sells gas.”

At the same time, popular, high-profile QSR brands continue to target c-stores and travel stops as sources of growth. With more competition and higher consumer expectations, then, a change was in order. “We needed to modernize and put our best foot forward,” says Culpepper.

Chester's at a Glance 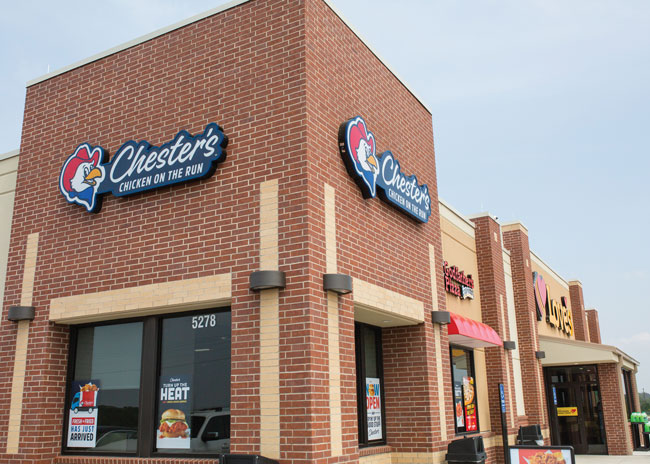 Seats per unit: Many stores do not include Chester’s-only seating. Some stores have a handful of dedicated Chester’s tables. Others have shared seating with other concepts in the same location. 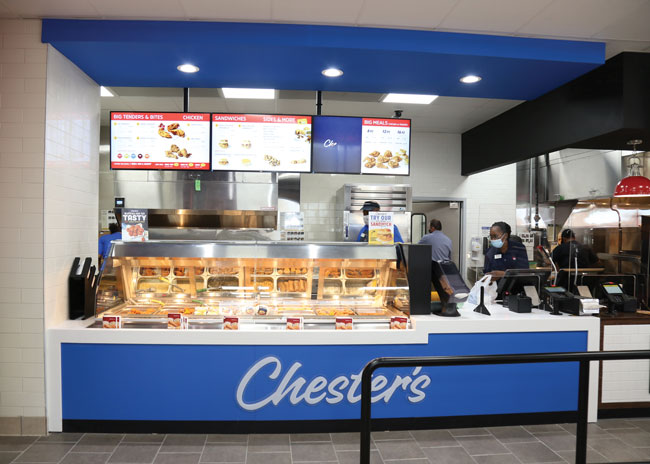 As a store-within-a-store brand, Chester’s doesn’t have a large dining area it can use to make an impression. In most cases, in fact, it doesn’t have a dining area at all, just some menu boards, an ordering counter and a cookline behind that counter, along with some LED exterior signage. Even with such a small canvas, though, the chain works hard to make an impression.

Out is Chester’s old color scheme, dominated by a heavy red with white block lettering on the POS counterface. In its place is a new design featuring a royal blue counterface with the Chester’s name in white script. That counter, notably, includes not just the POS station, but it also houses an integrated food warmer/merchandiser, where guests can see most of Chester’s menu on display ready to be served in bags and to-go boxes. The redesign gives operators an additional choice with this warmer. While the legacy unit remains an option, franchisees can now specify a higher-end case with discrete heating bulbs and a mirrored glass back.

The redesign also included a rework of the company’s menu boards. The chain has long used electronic boards, but their previous presentation tended to confuse many customers, Culpepper says. “A lot of the time, you would walk in and find customers staring at the menu trying to figure out what they wanted,” he says. “They’d end up just pointing at something in the hot case and saying, ‘I’ll take two of those.’ ”

The new menu layout is much simpler and is designed to give the most attention to high-margin offerings. While Chester’s doesn’t yet have hard numbers on how well this works, anecdotal evidence indicates it is a success. “We’re 100% franchised and we don’t always get access to POS data, but we’re getting feedback that with the new menu, things are moving faster and we’re moving the right product,” notes Culpepper. 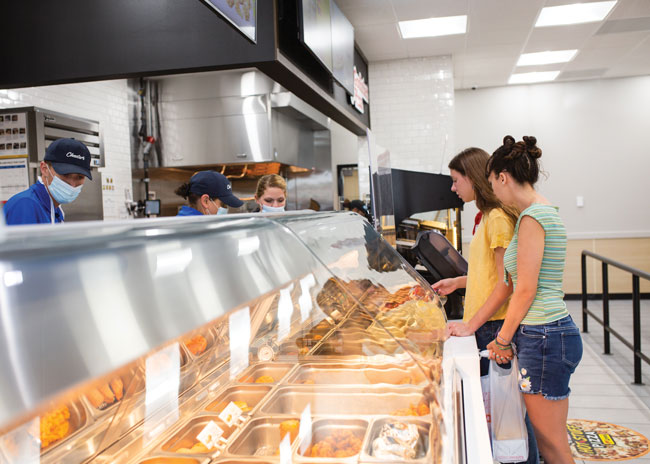 The chain’s redesign includes a higher-end heated display case with a mirrored glass back for better food presentation.

Not only did the redesign impact Chester’s front-of-the-house appearance, but it also incorporated changes meant to ease openings, factoring in the different footprints and infrastructure at c-stores.

Much of this work involved setting rules for design. While Chester’s has built flexibility into its equipment package and layout, the redesign also set guidelines for these layouts. Refrigeration for chicken destined for the fryer has to be within 20 feet of the cookline, for instance, while minimums for freezer, cooler and dry storage space have been codified. Chester’s even specified the size of the three-compartment sink necessary for effective warewashing.

“We’ve had a lot of learning over the years,” Culpepper says. “There are cases where the [franchisee] was really close to what we asked for, but we realized over time what was going to work and what was not going to work. We became very diligent over our requirements and knew what would set our operators up for success.”

Along with these rules, Chester’s offers franchisees essentially three different-sized operations from which to choose. The chain’s small version requires just 6 linear feet of counter space for a 4-foot warmer. Those restaurants focus on chicken strips and potato wedges.

In addition to the merchandiser, Chester’s equipment package can scale up and down depending on store size. What’s more, the stations feature a modular design, allowing operators to move them where the footprint requires. This flexibility is especially important since new restaurants often take over second-generation spaces and work within another restaurant brand’s shell.

Take the fry station as an example. Located behind the ordering counter in full view of customers, it consists of a breading/battering table, fryers and a landing table, which holds items directly from the fryer for just a moment before going to the warmer.

Refrigeration for fryer-bound chicken can consist of anything from a dedicated unit next to the fryers (common for large units) to back-of-the-house refrigeration (often used by small units). The number of fryers, meanwhile, can range from one for a small store to three for a large one.

Another station, which can be in the back or front of the house, consists of a convection oven for making biscuits and a worktable with a countertop rethermalizer. The rethermalizer is used to heat the chain’s boil-in-bag sides, including mashed potatoes with gravy, green beans with bacon, and macaroni and cheese. If this station is located in the back, it shares space with Chester’s prep area. The prep space contains a number of worktables, cold and dry storage, and a three-compartment sink for warewashing.

The workspace in the prep area has increased in the redesign, Culpepper notes. With limited hold times for its hot items (one hour for tenders, for example), prep takes place throughout the day. This space has always been important to Chester’s, given the attention the chain places on prepping raw chicken.

The recent addition of chicken sandwiches put an even bigger emphasis on the prep area. These sandwiches, which include fried, barbecue and a limited-time buffalo chicken offering, served the chain well during the chicken sandwich wars but require a lot of work, says Culpepper. The sandwiches are premade, so they require not only cooking but also adding honey butter and pickles to the bun, then wrapping and labeling.

Notably, premaking the sandwiches opened another revenue stream for Chester’s. In many locations, the chain sells them in hot food merchandisers near the c-store’s cashier station. Guests who aren’t comfortable seeing their food handled so directly during the pandemic or who are just in a rush can grab one of these sandwiches while paying for their gas or soda, then quickly get back on the road. 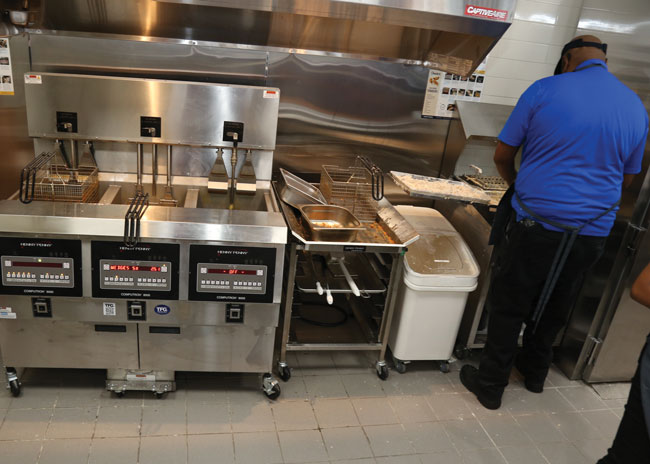 Fryers remain the key pieces of hot side equipment for Chester’s. The number of fryers can flex up or down depending on the location’s size.

With the new store design operational for just a couple of months now, the chain is still evaluating its ins and outs. Initial feedback, however, has been positive. The company is now working to roll it out into new locations for both existing and new franchise partners.

The hope, of course, is that this redesign will drive new partnerships. For franchisees, the company is open to signing single-unit deals. It finds the most success, though, with multi-unit operators who can leverage the efficiencies of their business and can build consistency into the brand across multiple locations.

Similarly, the chain seeks franchisees with foodservice experience. “If you are handling raw poultry and are fresh breading multiple times throughout the day, it is a serious job,” states Culpepper. “It requires proper staffing and a commitment to foodservice. That’s one thing we are looking for in an operator: that commitment and that experience, as opposed to an operator who isn’t as experienced with foodservice but thinks fried chicken sounds great.”

While Culpepper declined to give growth projections or target markets, the chain’s growth is certainly far from over. While Chester’s has an impressive store count, those stores are spread across 48 states in a country with nearly 50,000 miles of interstate highway.

In short, the chain is nowhere near built out. As Chester’s grows its store count and its footprint within the foodservice industry, it may fly to even greater heights.