Combining new high-speed ovens with a highly customizable menu, this Dallas-based chain is ready to make a name for itself in the fast-casual pizza segment. 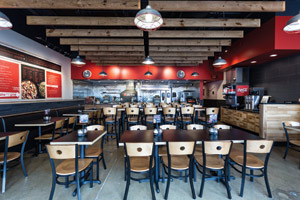 Fast-casual operators have transformed foodservice during the past decade. New chains — boasting high-quality ingredients in dishes completely customized to the individual diner — now serve practically every cornerstone menu of the quick-service industry. Burritos, sandwiches, burgers, Asian-inspired dishes — all have been remade by this segment.

One space yet to experience the transformation? Pizza. Sure, some fast-casual operators feature by-the-slice offerings, but those prepared menu items sit under heat lamps, and what you see is what you get. Usually, a couple of people share a whole pizza, which typically means ordering only one or two agreed-upon toppings — usually nothing too adventurous.

That may be changing at this very moment. Pie Five Pizza, a Dallas-based chain owned by Pizza Inn Holding Company, has combined new oven technology with a cold-well setup that supports a compelling pick-your-ingredients model. The result could be fast casual's next big thing.

While some chains are born in a flash of inspiration, Pie Five's founding had more to do with straightforward business acumen.

According to Madison Jobe, senior vice president and chief development officer at Pie Five, in the summer of 2010, Pizza Inn was doing what established businesses should do: looking for ways to grow. Charlie Morrison, the company's CEO at the time, proposed entering the fast-casual niche. While that certainly sounded good in a brainstorming session, everyone at Pizza Inn agreed they faced one significant obstacle. No chain had been able to pull off fast-casual pizza, at least not on a broad basis. If their fast-casual play couldn't combine the high quality, customization and speed that define the niche, diners would spend their $8 somewhere else.

"The real challenge initially was how to put out a quality product that meets our standards — not pre-cooked, frozen or pre-prepared in some way. Once we had the idea for fast casual, figuring out how to make it operationally possible and how to produce the product in the time we wanted is what we spent the next many months working on," Jobe says.

So, what changed? Well, advances in oven technology represent perhaps the main reason Pie Five has been able to meet its own standards. Even a year or two before Pie Five's conception, there really wasn't an oven that could cook a high-quality pizza fast enough and well enough to meet the chain's quality requirements. But Pizza Inn began developing this concept around the same time that foodservice equipment manufacturers were introducing speedier, more versatile ovens that were perfect for this task.

Since its opening, in fact, Pie Five has worked closely with a manufacturer known for fast-cooking ovens, even testing prototypes in the chain's own test kitchen. The chain specified an oven that combines conveyor and convection technologies, including multiple fans that blow hot air from different directions. With this piece of equipment, Pie Five's culinary staff can cook personal-size pizzas, from thin crust to pan, in roughly two minutes.

Combine that with the ordering process, and customers can go from walking in the door to having a finished pie in about five minutes. Hence the name of the concept: Pie Five Pizza.

Of course, there's more to making a successful restaurant than choosing one good piece of equipment. In building the Pie Five concept, the chain's leaders utilized some of the tried-and-true features of fast casual, to good effect.

When customers enter a store, they walk to an ordering line where they can see ingredients that will make up their pizza, including cheeses, sauces, veggies and meats, displayed behind a food shield. Pie Five features a far broader array of ingredients than what patrons find at typical takeout/delivery pizza places, says Jobe. Sure, there are the classic ingredients, such as pepperoni, sausage, mushrooms, olives and so on. But for the adventurous, the chain also has less traditional options, such as pulled pork (best paired with barbecue sauce) and buffalo ranch sauce (great with chicken).

Customers work with a team member to choose one of four crusts — including a gluten-free option — sauce and toppings. Alternatively, they can order off the specialty pizza menu, which includes traditional offerings like margherita and veggie pizzas as well as more innovative fare. The Pie Ferno, for example, is a thin-crust pizza with spicy marinara sauce, pepperoni, banana peppers, jalapeños, mozzarella, provolone, cheddar and crushed red pepper. Such variety fits squarely within the fast-casual ethos of creating the exact meal each customer desires.

"It's all about the guests and what they want," Jobe says. "As we've evolved the concept, we've seen the opportunity to add more flavors. We've seen some limited-time pizzas that may have had a sauce or ingredient that proved to be popular and put it on the menu every day. When you're all about customization and doing what the guests want with their pizzas, then you need to have more variety to make people happy."

While customers may be spoiled for choice, Jobe says the chain keeps it simple in one important aspect: cost. Pie Five uses a flat-pricing strategy, setting a price point of $6.79 per pizza. "You can order one of our signature pies or you can build your own, which means you choose your crust, your sauce and your toppings," says Jobe. "The uniqueness of Pie Five is that, either way you decide to do it, it's all one price."

Once diners get their pizza, they can sit down to enjoy their food in a relaxed, slightly quirky environment. Stores feature appealing and decidedly nonquirky large photographs of food preparation, like vegetables being cut and dough being kneaded. On the more amusing end, wall art also includes black, white and red faux diagrams of conveyor belts, funnels and tubes used for high-tech pizza making. The walls also feature a periodic table of toppings, with shorthand for different ingredients: Mz for mozzarella, P for pepperoni, Ps for pork sausage, and the like.

While the chain has maintained this lighthearted approach, the graphic identity and atmosphere have evolved in its newer units. Whereas Pie Five used to sport an industrial look with lots of exposed metals, it now incorporates natural woods and warmer colors into the design scheme.

"Part of the change was the evolution of the concept itself," Jobe says. "We had moved a few things around in the display kitchen line. Nothing major, but since we were going and we were so early in the process, we thought internally and based on our guest feedback that we should use the opportunity to create a warmer environment that doesn't seem just like a pizza kitchen."

Even though the pizza-kitchen feel isn't what the Pie Five team is going for, the kitchen still plays a big role in the store's environment. Like many other fast-casual concepts, the chain places its kitchen in the front of the house, bringing energy and drama to the space.

The Pie Five kitchen has two main lines: the front line, which sits just behind the food shield displaying the pizza toppings, and a second line along the back wall.

At the start of the front line sit two pizza tables with cold wells that store the toppings. Beneath the tables, drawer-style refrigeration holds extra prepared ingredients that staff use to replenish empty wells. Behind these tables is a similar but smaller table with wells and refrigeration for assembling both entrée and side salads.

Next is a tall, reach-in dessert display for cookie and brownie pies made in-house. A grab-and-go cooler offers customers a choice of beverages, including beer, where licensed. At the end of this line sits the point of service station.

The line on the back wall features a 40-quart floor mixer, which kitchen staff use to mix dough each morning and as needed throughout the day. Next to the mixer are a dough table and sheeter for parsing out and shaping individual crusts.

Then comes the star of the show: the oven. Instead of relying on a single unit, Pie Five installs an electric double-stack conveyor/convection oven surrounded by a combination of stainless steel and tile, matching the unit to the rest of the decor.

What's more, the oven does not require a hood, Jobe says. "It's got a catalytic converter of sorts that takes out any toxins in the warm air it's releasing. It also recirculates most of that heat back into the oven, so they're very efficient in maintaining their heat load. That also saves a significant amount of money on the initial construction costs."

Adjacent to the oven is a second dough table and roller, which allow the chain to function smoothly during peak volume times and provide valuable redundancy in case of a breakdown. Above the tables sit crust holders that store raw crusts waiting to be topped.

In keeping with its relatively basic front of the house, Pie Five features an even simpler back of the house. Ingredients are prepped (either by hand or with a high-powered food processor) on a long worktable as well as on a special vegetable prep table with a built-in rinse sink. Each unit also contains a two-door upright freezer and a small walk-in refrigerator, where about one-third of the space holds dough while it rises.

One piece of BOH equipment Pie Five doesn't have: a warewasher. The chain simply doesn't have enough reusable dishes to warrant one, says Jobe.

Like all fast-casual restaurants, one of the appeals of Pie Five as a business is its limited kitchen, which translates into a smaller start-up cost and simplified operations. These factors have helped the chain grow at a healthy pace. Since opening its first unit in June 2011, Pie Five has grown to 18 stores. Fifteen are company-owned, all located in the Dallas-Fort Worth area. The remaining three are franchised stores: one in Salt Lake City; one in Matthews, N.C., a suburb of Charlotte; and one in Overland Park, Kan., just outside of Kansas City, Mo.

While the chain is on the verge of passing the 20-store mark before reaching 30 months in business, there are much, much bigger things in store for Pie Five. Jobe can't provide the company's exact growth plans, but he says that they've done extensive due diligence on the top 100 markets in the country — a sign that they're ready to compete with anybody.

Even more impressive is the company's early track record with franchisees. Pie Five has already contracted out the rights to an additional 95 stores in 10 states.

And says Jobe, these are partners every up-and-coming chain should want — people who know the industry and how to operate well-run stores that can build a brand into something special.