Cliff Baker has worked for Singer Equipment Company’s M. Tucker Division for more than 20 years. He is also the founder of A Need We Feed, a nonprofit volunteer-run organization. Volunteers cook food in commercial kitchens, package them in individual portions and then deliver hot, fresh meals to first responders and others in need. 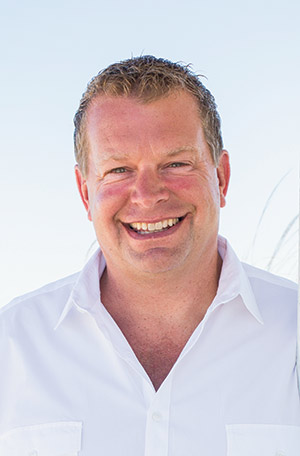 FE&S: How did A Need We Feed come about?

CB: I’m a veteran — I served from 1986 to 1989 in the Navy — and during my time overseas I remember always feeling out of place. One time I was in France and myself and three shipmates were walking around completely lost, trying to find a place to eat. This couple literally came out of their house, invited us in, thanked us for our service and made us a meal of steak and eggs. I still remember it like it was yesterday.

Fast forward to when Hurricane Sandy hit the coast. I was with Singer and visiting one of my customers, a local sports bar, when I notice two military newbies who looked like they were completely lost. I approached them and told them I was in the service and asked them if they needed help. They were called in on emergency to help restore the shore. It was just before Thanksgiving and they didn’t have a place to go so I invited them over to my house.

I didn’t know that this was a turning point and my opportunity to pay it forward. Soon we were extending the invitation to other first responders on the island. One of my friends, chef Mike, heard what I was doing and offered to come over to my house to help cook. Once I made the announcement that chef Mike was helping, I had five other chefs wanting to help out. Before you know it, we had 50 volunteers getting ready to feed 400 people. We have even expanded to do a barbecue in the summer with burgers, hot dogs, bags of chips and sodas.

FE&S: How were you planning to host that many people at your house?

CB: Someone loaned us a big canopy tent with tables and 100 seats and we planned to open our garage and set up there. Some of the manufacturers we work with even offered to supply us with chafers, warming boxes and cook-and-hold units. We set up a big buffet in my garage.

We were going to cook 50 turkeys. Just as we were about to have everyone come over we learned that the first responders were not allowed to cross the bridge and come off the island to the mainland. We couldn’t even go to the island ourselves unless we had an emergency vehicle. We didn’t know what to do.

One of our volunteers was a local firefighter and had an idea; he got a huge fire truck, brought it back to my house and we packaged all the food into individual meals and used the truck to bring the food to the responders at their stations. We made two trips — the first was to deliver the hot meal, and the second trip was to deliver dessert.

FE&S: How did the program grow from that point?

CB: After that first Thanksgiving, word got around about what we did. We were asked to help out again during Christmas. We kept doing more and more holidays. Even after the first responders left, state-run agencies asked us if we would continue to feed those in need.

We now also partner with an organization that helps veterans. Earlier on, one of my customers handed me the keys to her restaurant and let us cook out of it. We also get a lot of help from local businesses. Supermarkets donate hams, turkeys and desserts, and Caffrey’s Tavern gives us 400 pounds of mashed potatoes. Other restaurants I do business with donate some of the food as well.

We do some cooking and reheat the rest and set up two assembly lines and package all the meals. The first person puts the meat in the container, the second does the stuffing, the third the vegetables, and someone puts a lid on it. Then it goes outside, where it’s stuffed into bags and delivered by volunteers using their own vehicles. We feed around 800 people at one time with this system. The biggest production we ever did was 1,400 meals. Last year we prepared, packaged and delivered 3,200 meals in all.

FE&S: How has A Need We Feed impacted you personally?

CB: It’s so satisfying and humbling. Foodservice has always been in my background so it has been an honorable experience, and a great way to work with all of my connections and relationships I have built over the last 25 years. It’s amazing to see all the support we get.

The stories we hear are amazing. Three years ago my son was one of our volunteers and made a local delivery to a hotel that housed a lot of veterans. He knocks on the door and a veteran opens it. My son hands him the meal and says, “Merry Christmas.” The veteran said something along the lines of, “Thank you so much, I was about to commit suicide and now I’m not.” He even invited my son in to eat with him. It was his first time talking to anyone in two months. All this was shocking news to hear that we literally just saved a veteran’s life. He even said he can’t wait until next Thanksgiving when he can see us again. We would have done this sooner had we been able to.

FE&S: What are the organization’s goals for the future?

CB: We are trying to raise funds so we can have a budget that we can work with. We have been hosting more events and dinners where a portion of the proceeds goes to A Need We Feed and the rest to the restaurant.

We are also looking to possibly expand. We feed 800 people in just two counties of New Jersey, so we know there are so many more veterans and others who need a hot meal out there. We might even look to build our own kitchen.

FE&S: With a busy job already, how do you find time for A Need We Feed?

CB: My wife tells me I’m unbelievable with my time management. I pride myself on being pretty efficient and am most productive when in a routine. I also know I don’t do all this alone. Our volunteers are incredible. And we get so much support from our vendors and customers. It’s true what they say — you really are only as good as your team.