Restaurant insights from a trip to Mexico

The creativity in restaurant designs outside the U.S. never ceases to amaze me. They always serve as a source for inspiration and remind us that bigger is not necessarily better.

As the old cliché goes, necessity is the mother of invention and today that applies more than ever in the world of foodservice design. Somebody thinks about placing a foodservice operation in a unique location and regardless of the conditions or the challenges of the space, the restaurant gets done. International markets certainly subscribe to the old adage that if you want it bad enough, you will just figure it out. Perhaps soft municipal codes and restrictions help from time to time, but that does not diminish the creativity of the foodservice design.

For example, I recently visited Mexico for a wedding. Aside from having conversations with the locals, who happen to be a bit nervous on the U.S. political situation, we battled the Mexico City traffic and got to do a bit of sightseeing. That included a visit to the Pirámides de Teotihuacán. A walk up the “Pirámide del Sol,” as it is commonly known, is not for the faint of heart. It is only 245 steps (I count everything) to climb around 246 feet and reach the top of the third highest pyramid in the world. What makes it a real physical challenge, though, is the angle of the incline.

This is truly an amazing site. The marvels of modern engineering and machinery make it easier to see how constructing this would be feasible today. But how did they do it way back when without all the technology we have today? A lot of broad backs and shoulders were certainly part of the deal. If you have an opportunity, I highly recommend visiting Pirámides de Teotihuacán. 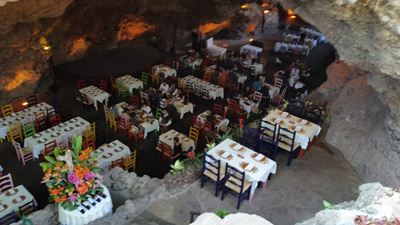 La Gruta restaurant resides in a cave in MexicoThe town that plays home to these pyramids also includes a restaurant called La Gruta. While the restaurant serves good, typical Mexican fare, what makes this a must-see destination is the fact that it resides inside a cave. 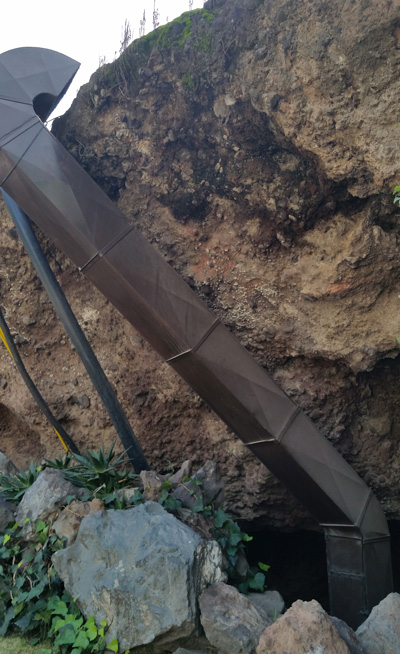 The exhaust system at La Gruta

When hosting a restaurant in a cave, one of the biggest challenges is finding a way to exhaust the effluent the equipment generates, otherwise the dinners will not last very long. The pictures show both a view from outside looking into the cave, plus the creative exhaust system they developed. There’s also a YouTube video about the restaurant.

During this same trip, we also went to a dinner with most of the wedding party at a local restaurant owned by an American businessman that overlooks the city of San Miguel de Allende, where the wedding took place. What struck me as interesting in this experience, is that they served a five course, fine-dining quality dinner to around 200 people in less than an hour out of a space that was likely around 100 square feet.

In a competitive marketplace, finding new and unusual spaces for restaurants can go a long way toward helping separate an operation from the crowd. Of course, this will force the project team to get creative in addressing a variety of functional tasks that tend to be much easier when developing a restaurant in other, more traditional locations. Are you up for the task?

Next time you go abroad, pay closer attention to how they do it. You might pick up an idea or two. When you do, share it with all of us. These experiences can give us ideas for our next challenge.