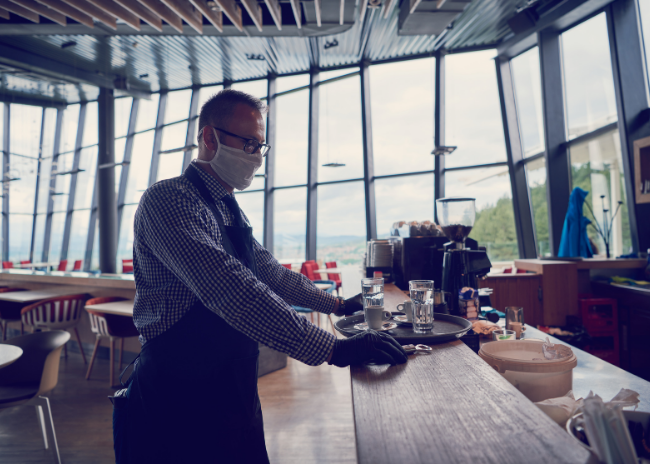 As the number of confirmed cases of COVID-19 go up across the country, governments in several states continue to crack down on restaurant and bar operations with the hope that doing so will slow the spread of the nefarious virus.

Over the past month or so, consumer concern about the virus as remained relatively steady. As of Oct. 14, 2020, 52% of consumers were very concerned for their safety in relation to COVID-19, per Chicago-based research firm Datassential. Given the recent surges in cases across much of the country, though, it’s likely a shift in in consumer is coming in the weeks or even days ahead.

This shift in sentiment will impact consumers’ comfort level when it comes to patronizing restaurants. For example, 42% of consumers say they will avoid eating out, as of Oct. 26, per Datassential. This marks an 8% improvement compared to Sept. 30. Further a majority of consumers will still use restaurants at this time. Per Datassential, 38% of consumers feel nervous but are still willing to dine out and 20% have no concern whatsoever about dining out.

While it’s promising to see customer comfort with using restaurants growing, it remains unclear whether the recent increase in positive cases will keep consumers from dining out. “Will it drive people away or will people feel they have been doing this for a while and feel comfortable continuing to do so,” said Jack Li, founder of Datassential, during the firm’s Oct. 29 webcast.

From a demographic perspective, Baby Boomers represents the group most apprehensive about dining on-premises at the moment. In fact, Boomers account for 56% of the consumers who feel it will be 6 months or longer,  or feel it may never be safe to dine on-premises, per Datassential. “Younger generations will ease back into the restaurants before the Boomers will,” Li says.

In some states, though, consumers’ comfort level with dining on-premises at restaurants may be moot, at least for a while. As of Oct. 29, seven states were rolling back their reopening efforts and another four paused their reopening plans, per a data table assembled by the New York Times. The remaining states remain either fully open or intend to continue with their reopening plans.

Among the states reversing their reopening procedures, one of the first steps they take is to restrict on-premises dining in restaurants and bars. Such is the case through much of the Land of Lincoln, where Illinois Governor J.B. Pritzker has issued orders restricting indoor dining at restaurants and bars in 8 of the state’s 11 COVID-19 regions. Needless to say, this development was not warmly received by many restaurant and bar owners in the state and they were not alone. In fact, Pritzker’s announcement to limit on-premises dining apparently caught Chicago Mayor Lori Lightfoot off guard. After a brief meeting with Pritzker the next day, though, Lightfoot, slightly softened her stance without fully endorsing Pritzker’s approach.

Still, the Illinois Restaurant Association remains none too pleased with the latest round of mitigations and is reportedly contemplating legal action, according to various published reports. In addition, leaders of some Illinois municipalities have made it clear they have no intentions of supporting Pritzker’s latest edict surrounding restaurants and bars. Further, a growing list of restaurants and bars throughout the state have vowed to remain open despite the governor’s decree. One reason for the ongoing operator frustrations is due to the fact that restaurants continue to invest in technologies such as air filtration, as well as personal protection equipment, to make their businesses safer for guests and staff, while operating under significant restrictions. Yet, despite these efforts, theirs are among the first businesses to close.

Illinois is not the only state where restaurant operators continue to voice frustration with their leaders. In California, restaurants filed government claims to recover more than $100 million in fees for liquor and health permits and tourism charges they say were assessed even though their businesses were shuttered or only allowed to partially operate under long-running coronavirus orders, per a story from the Associated Press. Restaurants in California were allowed to open and instructed to close at various times throughout the pandemic. The state has 58 different counties, many of which have different guidelines for reopening and servicing customers, further underscoring how things continue to differ by region.

In contrast, restaurants in New York City remain open for on-premises dining and were hoping to be able to operate at 50% capacity starting in November. But the recent surge in cases has many operators worried the New York Governor Andrew Cuomo may hold off on this as cases rise. A Cuomo spokesperson told the Eater, “…. we are continuing with this cautious, science-based approach so we can protect our progress and avoid going back to the hell we experienced in March and April.”

As a result of the rising coronavirus case counts as well the halting of on-premises dining in some areas, restaurants across the country continue to look for ways to extend the outdoor dining season, despite winter weather looming large on the horizon. There’s been a run on propane heaters and other items that will keep guests warm but many wonder whether these efforts will be enough to help restaurants survive a winter with COVID-19. Some operators have turned to single-party igloos or tents that seat multiple parties as a means to extend outdoor dining. Yet, some doctors question the safety of these approaches.

Still, despite the rising cases of COVID-19, restaurants remain top of mind for many consumers. Along those lines, 51% of consumers say they consider using restaurants daily but of that group only 37% follow through. As a result, COVID-19 remains a deterrent for roughly one in three of those consumers, according to Li. “We’re still not near the number where we would like to see in normal times.”

Indeed, normal times seem to be a long way off for an industry that’s been through so much in recent months.