Prescrapping is a necessary part of proper dishwashing procedures. But all too frequently, it can slow down the entire process. Major debris and nonfood items have to be scraped off the plate and emptied into the garbage. Food that is baked on to the ware may have to be scraped off by hand. A quick rinse of heavily soiled dishes may not be effective for removing tough soil. All in all, it’s a time-consuming process getting everything “clean enough” to go into the dishwasher. 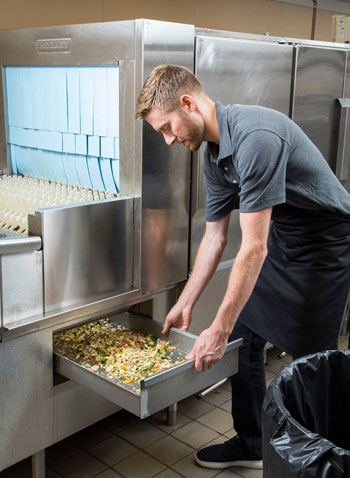 Many operators have found that reducing the amount of prescrapping they have to do saves both time and labor, and crew members who spend less time prescrapping can be assigned to other tasks.Steve Dorn, Kitchen Manager at the casual American concept Harrison’s in Tipp City, Ohio, says that reducing prescrapping can have a cumulative effect in the kitchen. “If you save 10 seconds or 30 seconds a rack, that time adds up,” he says. Considering all the racks run over the course of an average week or month, “if you do the math on that, it’s a pretty significant time,” Dorn says. He adds that when his dishwashing crew is freed up from prescrapping, they can do light prep jobs, such as prepping hamburgers or baked potatoes. “It also frees them up to do some cleaning and keeping the kitchen tidy,” he says. Monte Veatch, Food Service Director at Cedarville University in Cedarville, Ohio, says his team also has to do less prescrapping now. Some of the labor he has saved in the dishroom “is just saved and goes toward the bottom line,” he says. “Or we’re able to reallocate that and put more labor in the dining room to make it a better customer experience.”

How Hobart Can Help

One of the main reasons why Dorn, Veatch and so many other operators are doing less prescrapping these days is because they have Hobart commercial dishwashers with the Automatic Soil Removal (ASR) feature. With ASR, 80 percent of heavy food soils are filtered out of the machine during the wash cycle, which means less prescrapping is needed — as much as 20 percent less. Food remains which would previously have to be prescrapped can now go directly into the machine. So, the dishroom crew can spend less time doing the prescrapping and can be assigned to other tasks. With Hobart dishwashers, “We’re not having to handwash [dishes] or spray them, and that’s a real labor savings for us. You really don’t have to scrap very much,” says Veatch. “The machine is designed to do that, so that’s been a real bonus.”

Additionally, since ASR actively pumps food soils from the wash tank, the wash water stays cleaner for a longer period of time. That means fewer tank fills are needed each day because wash water changes are reduced by as much as 50 percent. That can result in a significant reduction in water consumption and saves additional time throughout the day. An external scrap basket makes waste removal easy, and it can even be emptied while the machine is in operation.

See for yourself how Hobart commercial dishwashers with ASR are making the dishroom at Cedarville University run more effectively by going to [https://youtu.be/UOC8ijstErc] or visit HobartCorp.com.