Browse vendor-neutral content on a wide variety of cooking equipment below.

A Guide to Restaurant Ranges

Ranges are one of the most versatile pieces of equipment in a commercial kitchen. They can be used for almost any cooking task. While cooking, stir-frying, grilling, sauteing, searing, boiling and broiling can be accomplished on the range top, the oven can be used for baking, roasting, warming, broiling, storage, and, if refrigerated or freezer drawers are included, cooling and freezing. 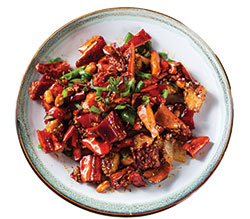 Commercial ranges, which include a top and base, can vary in width, features, configurations and available options. These units are typically classified as either restaurant type, which are more basic, or heavy-duty type, which include a manifold that is accessible from the front and connects to other ranges in a battery or series.

Standard range top widths can vary from 12 inches up to 72 inches, usually in 12- or 18-inch increments, with 36 inches the most common size. Four- to 10-burner units are offered, although 6- or 10-burner ranges are most often utilized for commercial applications.

Gas ranges, as opposed to electric ones, make up a majority of the marketplace. These units have open burners, with Btus ranging from 25,000 to 260,000. Electric units utilize tubular metal elements containing resistance wires. These are offered in 208-, 240- or 480-volt models.

Base options include standard or convection ovens, in addition to cabinet bases in a variety of configurations.

Oven thermostats range from 150 degrees F to 500 degrees F as standard. Units are available in natural gas and propane.

Compared with heavy-duty ranges, the restaurant series ranges are less robust and more affordable. There are not as many options or features offered with this equipment. 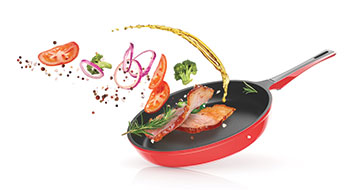 While a heavy-duty range may offer 40-plus different cook tops, including planchas, hot tops, French tops and other high-end cooking platforms, the restaurant series units are limited to a half dozen or so more basic options, such as open burners, charbroilers, griddles, salamanders and cheese melters.

These ovens also have a shallower depth and, in many cases, a smaller oven chamber. While a heavy-duty model is 36 inches deep, restaurant series ranges measure between 27 and 32 inches deep.

The quality of the burner system may be downgraded slightly with restaurant series models, which typically offer less Btus. Gas hookups for these more basic ranges are typically in the back, while heavy-duty types offer either rear gas connections or a front manifold. The more robust ranges also have the ability to connect multiple pieces of equipment, which the restaurant series ranges aren’t capable of. This allows connection through one continuous gas pipe in the front, which offers added efficiency since individual gas connections aren’t needed. 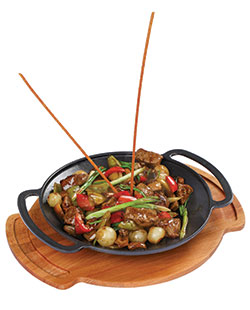 Another benefit of restaurant series ranges aside from affordability is that these ovens tend to have a smaller profile to accommodate more limited kitchen footprints. Gas supplies with these units can be installed vertically rather than horizontally, which also saves space.

In addition, there has been an increase in safety mechanisms with updated models. Mechanisms are available that sense if the hood system is inoperable and will automatically shut off gas to the range. Sealed burners also have become more popular to catch food debris, which offers easier cleaning.

Other range options include plate shelves, belly bars, casters, a curb base, risers and shelving. Manufacturers of restaurant series ranges are introducing more energy-efficient components, such as an electronic ignition.