With his diverse background on the operator side, which included stints as director of catering for the U.S. House of Representatives, director of dining at Harvard University and director for Downtown Disney in Anaheim, Calif., Leonard D. “Lenny” Condenzio, was perfectly positioned to continue rising up the operator ranks. But sometimes life throws a curveball, and in his case, it sent him on a successful path to become CEO of Ricca Design Studios. 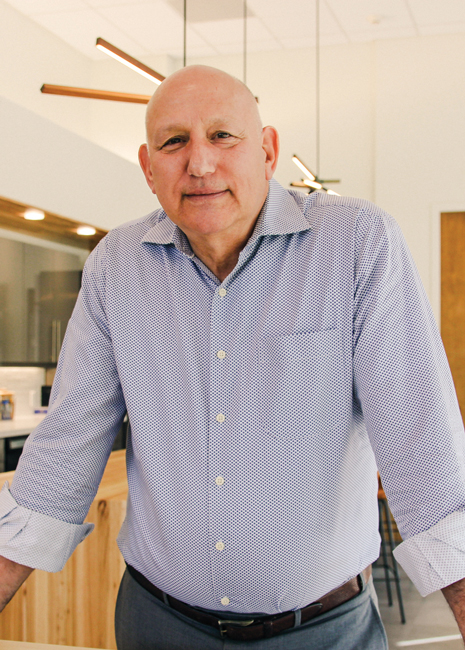 It was his leadership attributes, particularly with mentoring upcoming generations, that Kathleen Seelye, cofounder of Thomas Ricca Associates (now Ricca Design Studios), noticed when she first met Condenzio during his stint working at Harvard. “Lenny was demonstrating that he is someone who senses what’s going on in the world and the big picture,” Seelye says. “He quickly understood and mastered the meaning of what a consultant is, and right away I saw someone who wasn’t afraid to step into any leadership role.”

With his hotel restaurant management degree from the State University of New York (SUNY), Condenzio admits he “was always reigniting a space in [his] head thinking how a mediocre restaurant could be better.”

Following his work at the U.S. House of Representatives during the George H. W. Bush administration, Condenzio played an instrumental role in transforming Harvard University’s cafeteria dining model in the early 1990s. “From that renovation, it was natural for me to sit in meetings with designers, and I gelled with whoever I was working with,” he says.

This included Seelye. “I had a conversation with Kathy about coming on board at Ricca,” he recalls. “But I had an offer from Disney that I couldn’t refuse at the time.” Although he enjoyed the challenge of helping build Downtown Disney and California Adventure Park, Condenzio found he was ready to make a change two years later.

In October 2021 Condenzio become a principal at Ricca, heading up the company’s California office. He stayed from 2001 to 2004 and then headed back east to fill the position of principal in Ricca’s Boston office, where he now serves as CEO. “The consulting world can be tough for operators to move into, but Lenny didn’t have a long learning curve,” Seelye says. “As a consultant, we have to look at many angles for clients to build their future in a way that isn’t predicted by someone in their past, and Lenny really excelled in that.”

Condenzio notes that the degree of decision-making at some previous employers and the politics at others have been beneficial in his role as a consultant. “I was able to take my experience and put it into a company like Ricca, which is a small boutique firm that offers a high level of service but has the presence in the industry of being a big corporation,” he explains. “We have to be mindful of how our company doesn’t belong to one person or name. It is a brand that encompasses all of us who work there, and I’m very proud of that.”

“When Lenny stepped in as CEO, he made sure to foster a company culture where all team members can speak up and have a voice — no easy feat! And we have become a stronger Ricca family because of it,” says Tarah Schroeder, executive principal at Ricca. “Lenny is a natural leader and coach. He has mentored so many of us on the principal team with Long Island tough love, not always easy to hear but always making us better and pushing us to grow. ”

One of Condenzio’s first initiatives after becoming CEO was pulling the other partners together to create the Ricca Leadership Guide. This handbook details what the company stands for, serving as a moral compass and blueprint on how decisions are made.

“The guide, which has become part of the daily life at Ricca, is a living, breathing affirmation of Lenny’s vision for the company,” Seelye explains. “It’s an astounding document that fits the tone for developing the next generation. Most companies have three- or five-year business plans, and those are worthy, but to me this is the most worthwhile project Lenny took on completely on his own to develop young leaders.”

It is this focus on the generational transition of Ricca, along with carving his own path, that Seelye says are among Condenzio’s biggest strengths. “Many who come in behind others look at the way things have been done in the past and are careful and cautious about how ideas are introduced, but Lenny is not like that,” Seelye explains. “His greatest strength is bringing the whole company into betterment. He’s a very inclusive leader who helps people take on more responsibility, see where their opportunities lie and find their own leadership styles.”

Being successful as a designer means learning how to listen, which is not as simple as it seems given that project teams often include voices from many different perspectives. It can be even more challenging for Condenzio, who is hearing impaired. “It is not news that Lenny was born without the hearing capacity that most of us take for granted,” says David Chislett, executive principal at Ricca. “When I first met and worked with Lenny, I assumed that I would need to sit close to him and help augment the conversation by repeating what others were saying or taking good notes. I thought that he couldn’t listen as intently as I could — I couldn’t have been more wrong. Most people don’t know that Lenny’s mom refused to stream him into a support track outside of ‘normal’ hearing peers. This gave him the opportunity to read lips while communicating like everyone else and allowed Lenny to become socially embedded while developing exceptional resiliency. One of his most striking characteristics is that he not only ‘hears’ what others are saying, but he truly listens to them. I have never met anyone who listens more intently to others with true care. And that is one of the many secrets to his success.”

Condenzio also is proud in fulfilling the role of “facilitator of courage,” taking risks in meetings by making statements that some may consider controversial. He notes the time spent on the other side of the table at Harvard and Disney has given him a unique perspective in that regard. “I know I’ve upset someone in a room, including a client, by asking a ‘why not’ question,” he explains. “It’s a waste of time not saying what needs to be said; everyone needs to be genuine about a project. I’ve had people thank me for having the courage to speak my mind.”

His candor and honesty have served Condenzio well. In addition to his role at Ricca, he has been involved with several industry groups, including Foodservice Consultants Society International, the National Association of College & University Food Services and the Society for Hospitality and Foodservice Management.

I’m pretty scheduled till I go to sleep, but I try to do nothing until noon on weekends. I’d say 5% at most.

No matter who you are or what position you’re in, you have to recognize others have feelings and concerns. We must be aware of that. This helps when working with Ricca staff, when in a project meeting with folks around the table, and resonates with friends and family. There are times you’re tested, but you need to be respectful to the other person.

If you could go back in time five or 10 years, what decision would you make differently?

I’ve had some public failures, but those turned out to be highly beneficial in my present-day experience. For this reason, I wouldn’t look back and do anything differently.

Young people keep me inspired. I work with people of all different ages who are pursuing their goals and becoming successful — that inspires me. I would go to the ends of the earth for anyone discovering this industry and help them be what they want to be. It’s incumbent on all of us to share their excitement. I love the challenges, questions they bring up in meetings and their perspective on work/life balance. It’s all inspirational.