A landscape architect by training, Todd Guyette, principal and owner of Colburn & Guyette, brings a unique skill set to his veteran role as a foodservice designer. 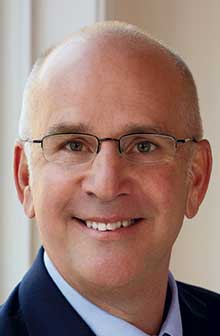 Todd GuyetteColleagues recognize Guyette as a master liaison with architects, construction leads and other big project players. He takes an active role in not only programming and conceptual design efforts, but also in the extensive coordination needed for these complex projects. While working his way through school in kitchens and dining commons at the University of Massachusetts-Amherst, little did Guyette know that this experience in foodservice operations would be instrumental in his design career.

Not coincidentally, a large number of Guyette's projects center on colleges and universities. He has overseen major foodservice overhauls at his alma mater and other places of higher education, including Boston University, Northeastern University, Harvard University, Muhlenberg College and Becker College. He has also worked on projects in the corporate/B&I and healthcare arenas with the occasional project in hospitality. Case in point: his firm has had repeat projects with Bose headquarters in Framingham, Mass., Liberty Mutual in Massachusetts and New Hampshire, and Boston Scientific in Boston.

The transition from architecture to foodservice wasn't necessarily planned. "From a young point in my life, I always wanted to be an architect," he says. "After graduation, I tried to find a job drafting at an architecture firm, but times were tough and there was a bit of an economic downturn."

Instead, Guyette landed a job as a draftsman for a kitchen equipment contractor for a brief period. Then, in 1985, Guyette joined foodservice consultant Michael Colburn's firm. Guyette quickly fell in love with the work.

"Fortunately for me, Mike was the type of guy who liked to give people a lot of responsibilities and see how you'd react," Guyette says. "If I had gone to an architectural firm, I would have spent most of my time drawing details — not the broader type of work I could experience in the foodservice consulting world, which combines architecture with design, engineering and operations."

Taking the reins right out of the gate, Colburn saw something in Guyette in the three and a half years he spent working at his firm before leaving to work briefly for another consultant. It was then that Colburn offered Guyette the chance to come back as partner and essentially take over the business.

"That was 25 years ago in 1991, and I've been pretty much on my own running the firm since then," says Guyette, who has helped grow the firm from just himself and a drafter to eight full-time employees, including other designers, drafters and marketing pros. The firm has moved four times, from small to bigger to better quarters in the south Boston suburbs.

Much of the work the firm brings in comes from referrals and partnerships with architects, who primarily engage with them earlier on in the project. This is every consultant's dream — to be able to weigh in on the foodservice needs earlier in the project rather than later, when it can be extra challenging to design a kitchen within the constraints of the space (or lack thereof) provided.

"We work really hard at maintaining and cultivating relationships with architects," Guyette says. "That's not to say we don't work directly with the owner side, but we approach every project the same way; we work in tandem with all the team players."

Guyette's also known for collaborating with management advisory services (MAS) consultants who can bring the business, operational and financial expertise to a project if that area is lacking. Collaboration like this goes hand in hand with the philosophy of Colburn & Guyette as a firm.

"We're all about communication," Guyette says. "Our work is not just about pretty drawings and three-dimensional art; it's mostly about communicating information to many different people. We understand what architects and engineers need, but we also understand the needs and desires of the foodservice stakeholders on a project."

Guyette is an avid tennis player, golfer, skier and overall sports-and-fitness enthusiast. Eating healthy and staying lean gets him through the day and through the grueling and fast-paced nature of big facility project work.

And the "lean" aspect goes beyond the physical for Guyette; these days, he's focused on applying lean manufacturing techniques to improve efficiencies not only for his projects but also for his own firm's operations, working through details thoroughly before presenting work to the client.

"The pressure is on us constantly to get the design done and get things going as soon as possible," he says. "We can only work so fast, so this change in our paradigm has helped us work to get to the end goal quicker, for both us internally and the client."

That focus on efficiencies also transfers to Guyette's focus on sustainable design, something he says all foodservice operators want these days. Elements of sustainable design include specifying energy-efficient and water-saving equipment, minimizing exhaust through design and the use of waste-reduction tools like pulpers, composters and cooking oil recovery systems.

"Sustainability continues to be an important part of our industry, and it's up to us to adapt and stay on top of what's out there in terms of equipment and design techniques," Guyette says.

Innovation also remains an important component. For Boston University, Guyette designed two separate kitchens on two different levels, integrating cooking with the seating throughout the multilevel space to keep the kitchen action alive for the students and ensure the food was cooked as fresh to order as possible. At Muhlenberg College in Pennsylvania, Guyette's team developed two self-sufficient Kosher kitchens to separate meat and dairy and to conform to strict foodservice prep requirements. These kitchen were integrated into the larger servery and open to all students.

Being an early adopter of three-dimensional building design software — the firm began using it seven years ago — has also helped the company innovate and score key projects with architects who nowadays "insist on it."

"It makes it easier to work together in the same document and look for potential conflicts between foodservice and architecture, rather than forcing the architect to take the extra step of plugging our CAD drawings into their BIM designs and us having to alter our designs at the last minute," Guyette says.

Throughout his career, Guyette has remained actively involved with Foodservice Consultants Society International (FCSI), having spent 13 years as the chairman of the New England chapter. He is also a former board member for FCSI-The Americas Division and has served on a variety of committees. FCSI has helped Guyette partner with other consultants in an effort to raise the bar for professional standards and ensure both designers and MAS consultants stay not only relevant but strongly needed in the foodservice community.

Get to Know R. Todd Guyette