Chris Folz survives and thrives in the foodservice industry by making very conscious and deliberate choices about the direction his company should take and identifying the correct path to get there. It's ironic, then, that FE&S' Top Achiever – Manufacturers' Representative for 2014 got into this business almost by accident. 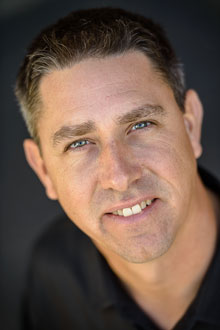 Chris Folz. Photo www.carlbower.comFolz is principal and vice president of sales for The Redstone Group, based in Englewood, Colo. He co-founded the company in 2009 by merging his previous rep firm, Hartco, with EMI Marketing, which was led by George LeCavalier, Folz's partner and an FE&S Top Achiever in 2001.

Folz got his start as a rep 15 years prior to the merger. In the fall of 1994, Folz was about nine months removed from college graduation and was enjoying some down time before embarking on a full-blown career. One evening he went to dinner at the home of his uncle and Hartco principal Jerry Rhinehart. "We were literally having a beer and he asked if I would be interested in joining his company. The first thing I said was, 'I have no idea what you do. What would the job entail?'"

That night, Folz and Rhinehart discussed the company and the industry, and laid out a long-term path that, if all went well, would have Folz one day buy out his uncle and take over the firm. Folz would go on to become a successful, respected rep and businessman. It was as a businessman that Folz dealt with the shifting landscape of the foodservice equipment sector, which had seen numerous manufacturer consolidations and changes in rep territory boundaries.

In 2008 another shift took place, one that directly affected Folz. One of the biggest manufacturers Hartco represented announced it was merging with another company, whose lines were represented primarily by EMI.

"George and I knew a pretty big battle was coming over who was going to end up with all the lines," Folz recalls. "Through that, we sat down, talked about the consolidation, about our theories of how to go to market and how to support the end users and dealers. Through our conversations, we asked what if we merge our companies and come up with a model that sets us apart from traditional rep groups?"

After many months of talking and number crunching, they agreed to merge. At the end of 2009, Folz simultaneously bought Hartco and merged with EMI, forming The Redstone Group.

Today, the company goes to market with a customer-centric corporate mission. "Our main goal is to help our customers thrive," says Folz. "It's something we preach to our salespeople as well as to our inside sales team. What can we do, what services can we offer our customers — be it end users, dealers or manufacturers — to help them thrive, to be better and more profitable."

While every businessperson, if asked, will say it's all about the customer, with The Redstone Group Folz takes clear, concrete steps that back up the assertion. A big part of Redstone's corporate culture is continual investment and reinvestment in the company, even at the expense of the principals' own pocketbooks. "[George and I] don't need to have huge bonus checks at the end of the year," he says. "We feel it's more important to reinvest back into the company. That keeps us where we are and helps us keep getting better."

The company, for example, put significant resources into its physical infrastructure, creating a large test kitchen and a training area that the firm uses for buying group training events. It also allows end users to test equipment and even entire kitchen set-ups.

Another major investment, Folz says, was the purchase and implementation of a high-end customer relationship management software suite. While the system was originally set up for just a few basic functions, Redstone has customized it to help its team be more responsive to its customers. Now, every salesperson has a dashboard that tells them their top 10 "opportunities" for each day, which could be anything from a reminder to call on an end user to the need to submit quotes for a project. Associates can also use the system to update
order statuses, and review quotes and drawings. It also connects each opportunity with a member of Redstone's inside sales team, who can help answer questions, track orders and more.

The company has also implemented procedures that clearly place the customer at the center of the business. Redstone reps for a huge area, including Idaho, Montana, Wyoming, Utah, Colorado, Arizona, New Mexico and part of West Texas. While the company has a total of five offices to cover its region, it has centralized its customer service activities in its Englewood headquarters. This, explains Folz, helps ensure the correct and uniform handling of all Redstone customer service activities, from submitting quotes to tracking jobs and orders. Just as important, this centralization allows the firm to implement customer service best practices for its entire customer base.

One of the most important of these practices, Folz says, is the "sundown rule." Essentially, if a customer calls with a question or issue, Redstone will push to solve it by the end of the day. If a one-day fix isn't possible, a member of the sales team will call that customer by closing time with an update and an assurance that his or her problem matters.

Outstanding customer service, Folz notes, isn't just achieved through top-down directives. He and LeCavalier regularly meet with the inside and outside sales teams to learn how leadership can better support them and find out where the company can improve. "There's a new culture here of 'how can everybody support everybody and truly be on the same team to create success,'" says Folz.

So far, the Redstone approach keeps paying dividends. The firm was able to show its primary manufacturers it was in their best interests to stick with the new company and it continues to help its dealer partners understand this new, larger rep firm is at least as good a partner as Hartco and EMI were. And despite the merger forcing Redstone to resign other lines there has been "a lot of success in pure sales and dollars," Folz says. And the company hit its 2013 sales targets.

Next for the firm, according to Folz, is continued growth and continued implementation of the Redstone model.

"We want to keep working, we don't want to slow down," he says. "As I see the company progress, of course it makes me smile. It's an incredible accomplishment, what we've done in four years, what we've created. Sales dollars are going to be there — they have to be there — but to see a culture, to see people buying in and have the model work is just a tremendous accomplishment."