Jameel Burkett talks fast. That's not a bad thing — it becomes obvious a few seconds into conversation that his brain works just as fast, or faster. And good thing, too, he's a busy guy. At the ripe age of 33, Burkett's already on the fast track to industry stardom. On top of that, he's a loyal family man with a wife, two-year-old daughter and five-year-old son. Not a bad run in such a short time. 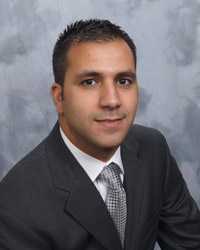 Jameel BurkettAfter a brief stint working outside the company, Burkett joined his father's business as vice president to learn the ropes and eventually became the dealer's president in 2001. Surprisingly, before taking over the business, "I had zero interest in working here," says Burkett. And prior to joining the company, Burkett worked in the IT department of Owens Corning and sales at Gateway Computers.

But Burkett wanted to have a family and a stable place of employment anywhere but the "slower-paced" corporate world, so the opportunity to work for the family business intrigued him. With a workforce of 60 employees mostly in their 20s and 30s from all different backgrounds and specialties, the Toledo dealership is a fast-paced, go-getter type of place.

"We like to say we have the big business structure with the small business feel," he says. "We'll hang out together after work and many of us are good friends with other family members here. What I love most about the job is the industry and the people, which is very family and relationship oriented. I also like the thrill of growing and knowing that there are still many opportunities out there."

In just the last few years, the company's grown exponentially, climbing up FE&S' Distribution Giants list from 100 just 4 years ago to 87 and then 66 last year. This year the company clocks in at no. 64 with $19.2 million in sales.

"We've had solid revenue growth in the last couple years," Burkett says. "When my dad opened the dealership in 1977, it was primarily to serve Toledo with used equipment."

Times change. Nowadays, while Burkett Restaurant Equipment continues to post a large number of used equipment sales, primarily through its online commerce division and Toledo showroom, the company has also moved into the national contracts arena.

In fact, given his degree in IT with a minor in e-commerce and finance, experience building websites and self-professed computer "obsession," it's not surprising, then, that Burkett refers to the company's
e-commerce site as his baby. Launched in 2005, the same year he came on board, the e-commerce division, www.BASequipment.com, now sees more than 100,000 visitors each day and has even had orders from The White House and NASA.

"Our business wouldn't be where it was today if it wasn't for the Internet," Burkett says. "We never had street reps before I started — we just had the showroom at the time — and to this day we still don't have street reps," Burkett says.

Instead, DSRs work the e-commerce side in addition to the growing contracts division. "That's what makes us different than just a catalogue house," Burkett says. "We use trained DSRs to help service clients' needs rather than going door-to-door."

Outside of sales, the company employs 12 people just to manage the website alone. "We invest heavily in making sure we have the best website we can through good product information and good SEO practices, as well as referrals and word of mouth," Burkett says. To further online branding efforts, Burkett worked with his sister, who helped launch their social media campaign, including a blog, Facebook and Twitter accounts.

As a result of the strong e-commerce site, Burkett Restaurant Equipment fell into contract work almost by accident. As more restaurants and chains found the company through the website, one job turned into another. Now, the contract division has grown to represent 40 percent of the overall business, and since 2011 the division's sales have grown by 120 percent. Most of the contract business involves restaurants and chains, followed by institutions, namely schools.

"When the Internet business started to go south around 2008, we actively looked into new ways to build revenue," Burkett says. "A lot of those opportunities were in the bidding world; Ohio went through the huge undertaking of remodeling all of its schools."

Now, Burkett says he's aiming for a 50/50 split between revenue from contracts and e-commerce. The company's in-house designers have only helped grow this division. "We take baby steps as we grow and never jump into something we can't handle," he says.

With lots of perks like catered lunches, flexible work hours and social gatherings, Burkett Restaurant Equipment's a fun place to work. People work many hours, but it's because they want to. "We don't believe in micromanaging," Burkett continues. "We all know our deliverables but we have a laidback environment. I feel if you give people the tools they need to do their work and remove barriers to getting the work done, you succeed as a team."

In growing the business from just 5 employees to 60, Burkett looked outside the food industry to recruit fresh blood. "Although ours is a great industry, bringing in people from the outside opened up opportunities for us in technology because those strides were already happening in other industries." Burkett's staff consists of former Xerox employees, along with others from the digital computing, teaching and automotive industries.

Burkett worked to shape the dealership's team-focused attitude and superior customer service on seven core values: 1) wear your customer hat, meaning put yourself in your customer's place); 2) develop open relationships filled with honesty and respect; 3) drive change and innovation and challenge the status quo for that competitive advantage; 4) do more with less by eliminating waste by working leaner and more productively; 5) build a fun and positive team, and that includes your customers, suppliers and other industry peers; 6) pursue growth and learning by investing in our people and in regular education and training, and 7) it's your company, build it, specifically through an entrepreneurial spirit and empowered employees.