Located in the Comcast Center in Philadelphia's Center City area, Table 31 was a "bear" to build, according to Chris Scarduzio, chef/owner of Signature Restaurant Group, which leases the space. That's because the building's original design lacked the necessary components for a restaurant. 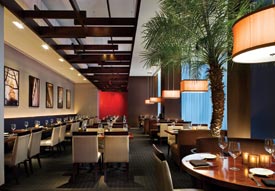 "When we realized we only had 1,800 sq. ft. on the first floor, we met with the building's developer and identified space on three other floors to place the kitchens and storage," says John Egnor, president of JEM Associates in Pleasantville, N.J., which provided kitchen design consultation.

The net result was a restaurant operation that spans four floors and allows staff to work efficiently with equipment designed for restaurant and banquet service. Our judges were impressed with the design, noting that the equipment selection allows for a nice work flow over the four floors the restaurant occupies. In addition, our judges feel the restaurant provides "magnificent" windows into the kitchen.

Other highlights of the project include: