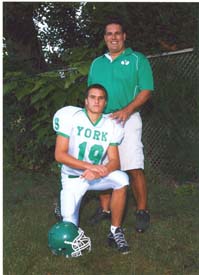 Mike and Danny Perrino
The intensity and the pace of working in the foodservice industry can take a toll on most anyone. In addition to his love of cigars, Mike Perrino's other diversion is coaching football at York High School in Elmhurst, Ill. While Perrino's been at York for the past six seasons, his coaching experience dates back to when his sons, Nico and Danny, first started playing the game as youngsters. As they grew older and moved from one level to the next, Perrino continued to serve as their coach, until he eventually wound up at York, which is also his alma mater. Nico is now a student-athlete at Indiana University, where he runs track. And Danny is a student-athlete at Fordham University, where he plays football. Mike's daughter Christina is a junior in high school.

In addition to being a welcome diversion, coaching football has taught Perrino a few lessons that he applies in his professional life. One of the more basic ones is don't "negative coach." "It's very easy to be negative when things go bad, but that does not help," he says. "Sometimes a customer will throw their negative energy at you, and you want to pass it along to another teammate. It's important to avoid doing this and remain positive."

Perrino has also learned how to teach his players and colleagues how to effectively compete and continuously improve. "If you are going through an exercise and it is not going as you would like it to, you have to take the time to stop and point out the areas for improvement," he says. Identifying where a process breaks down, whether it's on the football field or in servicing a client, and constructively showing ways to improve it, helps Perrino maintain credibility in the eyes of his co-workers and players.

For example, when presenting ideas for new glasses or dishware, it is common for a sales rep to request the factory send a sample to share with the customer. Knowing that samples can get damaged in transit, Perrino typically orders two to make sure the customer presentation goes off without a hitch. "There is a reason we do what we do," he adds.