Dealer of the Year

The Dealer of the Year award recognizes the foodservice community’s best companies with this prestigious annual commendation.

A Legacy of Relationship Building

Norman “Gus” Gustafson was well known for caring about people. He treated customers as he wished to be treated, and he extended that same courtesy to employees and business partners. He wasn’t afraid of hard work, and he was wary of a man in a tie. 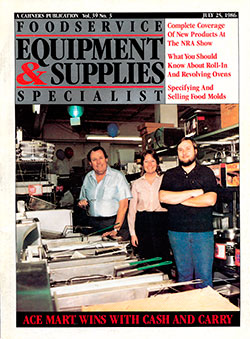 Norman Gustafson on the cover of FE&S in 1986 with his children Norma and Paul.“When he first started, he didn’t know anything about this business, but my dad could talk to anybody about anything at any time,” says Paul Gustafson. “So I learned the ropes in-store while Dad went to the NRA Show and visited as many dealers as he could to learn more and more about the business.”

Gus also believed in industry organizations. “He joined FEDA [Foodservice Equipment Distributors Association] right at the get-go,” says Norma Gustafson. “And we’ve been going to FEDA ever since.”

He reached out to people in the industry. He made real friendships with other dealers in other towns. His desire for sharing knowledge in the dealer community started early, and his legacy is reflected in Ace Mart’s well-known open-door policy today.

Gus believed that inventory on hand would be the key to success. If you wanted three or four of a given item when you showed up, his stores had them. And if you needed a thousand or more, he could get those for you quickly. “He felt you could invest money in inventory or in accounts receivable, and he chose to invest in inventory because he carried no accounts receivable. So we slowly built up inventory, and we now have over $17 million in inventory,” says Paul.
Building a large inventory was no easy feat. Gus was convinced reinvesting in the business was the best course of action. As a result, he drew no salary for the first five years in business.

“It’s a good thing our mom was working,” says Norma. “She supported us.” Frances “Fran” Gustafson served as director of volunteers at Baptist Hospital in San Antonio for 20 years.

After outgrowing its first location, Ace Mart relocated across the street to a 4,500-square-foot building that had no air conditioning. “Fridays were cleaning days,” Norma says. “Everything got dusty, and we had to sweep and clean.”
The work was often backbreaking. “There were no forklifts. So we’d back my truck up to the 18-wheeler and load it, and then I’d drive to the door and unload it into the store. It was quite a manual process back then,” says Paul.
And nobody worked harder than Gus. “I just recently heard a story about him: There was a clogged toilet, and one of the guys who was helping with maintenance just couldn’t do it, so my grandfather rolled his sleeves up and put his hand in and did what he needed to do to make the toilet work,” says Paul’s daughter Stephanie Bean, head of human resources development. “So that’s it — nobody is better than any task here. Those stories perpetuate our culture.”
“Our company is based on customer service. It’s in our mission statement; it’s what we’ve tried to hold on to,” says Bud Herrmann, director of operations. Herrmann joined the company in 1988. “It’s what we consistently teach. The first day I met Gus back in 1981, when I was a manufacturers’ rep, I drove into the parking lot, and he was out there with a dolly loading beer mugs into a lady’s car. That’s just how it is. Anywhere else, you can buy all this stuff, but what we’re selling is customer service.” Paul, Norma and co-owner Carl Gustafson note that no one has played a more important role in the company’s growth than Herrmann, nor is anyone more respected at Ace Mart.

Gus would tell reps that parked in front of the store to move their cars — prime spots were for customers. Every Friday, Gus would buy a couple of cases of beer and sit on the loading dock to talk to sales reps and employees, learning about them and considering the business from every angle.

“That’s where a lot of our best ideas came from,” says Norma. “And as we added people, they brought ideas with them. Dad believed strongly in product knowledge and training and relationship building.”

Norma introduced the first computer to the company. Like so many employees over the years, she introduced a good idea, and it was adopted and incorporated accordingly.

“Gus believed in people,” says Steve Henley, store manager in San Antonio, who has been with the company in a variety of capacities since 1983. “I remember him telling me, ‘We’ll go as far as our people take us.’ He believed in giving people second chances and took pride in finding diamonds in the rough. As we grow and change, it’s all about trying to develop talent.”

The ways in which Ace Mart has managed to both codify Gus’ core business beliefs while also plotting a course for growth is key to understanding Ace Mart today.